Vet becomes farmer with no regrets 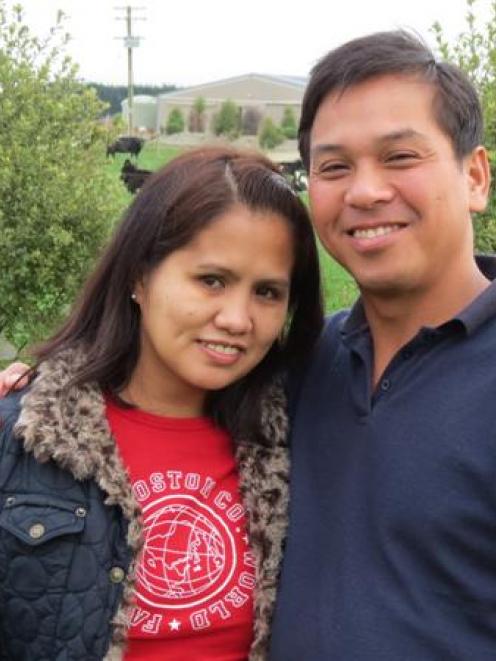 Khristine and Don Mananes live on a dairy farm near Riversdale, where he is a farm manager, and both enjoy the rural lifestyle. Photo by Yvonne O'Hara.
The lives of a qualified veterinarian and a computer science graduate from the Philippines took an unexpected turn when they arrived in New Zealand.

Unable to work in his chosen field in New Zealand unless he took a refresher course, Don Mananes, now lives with

wife Khristine and daughters Denisse (9) and Diane (4), on a dairy farm at Waiparu, near Riversdale, where he works as a farm manager and AI specialist. The family loves the lifestyle, which is different from the city lifestyle they had back home.

The family is originally from Bulacan province, in the Philippines, where Mr Mananes owned a poultry veterinary supply business and was a practising vet, while Mrs Mananes was an IT and inventory supervisor.

''When I got married I wanted to have a good future for my family,'' Mr Mananes said.

They decided to move to New Zealand to achieve that and arrived in Southland in 2007.

To practice as a vet in New Zealand, he would have to undertake a refresher course but chose to go farming instead.

''However, it [being a vet] doesn't matter for me any more, as I love farming.''

He was then offered the position of farm manager on a 180ha property owned by Waiparu Farm Ltd's Trevor Bain, milking 570 cows.

He is in his fourth season on the property.

''I always make sure we have high-quality milk,'' he said.

He said he was pleased he entered the competition.

''The judges told me the only difference between me and the winner was a point.''

He is considering entering again.

The family would ultimately like to own their own farm and have the nucleus of a small herd already.

''In about five to seven years we would like to go 50/50 sharemilking.

''If we do buy a property, we will start small block for winter grazing then build up livestock numbers.''

He said his employer had been supportive and keen to see them progress.

Mrs Mananes worked as a cleaner at the Riversdale School until recently, before leaving to clean houses.

She also works for an Auckland travel agency, arranging tours and tickets to the Philippines from her home office.

A computer science graduate, Mrs Mananes also worked as an IT supervisor and inventory supervisor when in the Philippines.

However, there are no jobs in the area for her but it is something she would like to pursue in the future.

She is looking at SIT courses and might take one next year when Diane goes to school.

''However, my priority is my family,'' Mrs Mananes said.

In the meantime, she said, living in a farming area meant they got to spend more time as a family.

The family enjoy exploring the countryside and are involved with sports.

''We want to spend as much time with our kids as possible as they grow up so fast,'' Mrs Mananes said.

She said they enjoyed the country lifestyle.

''Southern people are really warm, friendly and kind,'' she said.

They have made lots of friends here, both Philippino and Kiwi, and belong to the local Catholic Church.

Mr Mananes plays basketball and is a coach for the local Philippino team, which plays in tournaments.

Although the couple spoke English when they arrived, it was American English, which was slightly different.

They both speak their native tongue at home to ensure their children are bilingual.