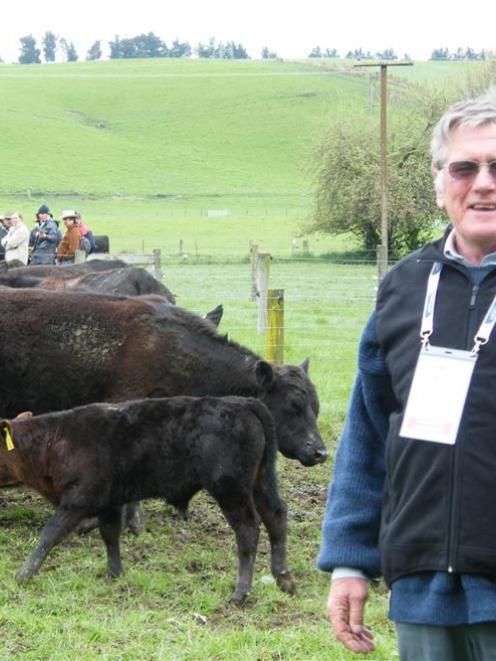 Gerald Hargreaves, with his wife Sue, is the second generation to run the Kakahu Angus stud which was started in 1954 by his father K.H. Hargreaves and continues with son Tom Hargreaves and his wife Anna. Photo by Ruth Grundy.
Angus cattle enthusiasts from around the globe began their month-long celebration of the breed in the South Island last week.

It is expected up to 500 will attend the four-day PGG Wrightson World Angus Forum and the celebration of 150 years of Angus cattle in New Zealand which began in Rotorua, on Sunday. It will be followed by a tour of prominent North Island studs and was preceded, last week, with visits to well-known South Island breeders.

Courier Country joined about 150 people, including visitors from as far afield as Canada, Scandinavia and Argentina, at the pre-forum tour stop at Kakahu, near Geraldine.

The 1100 ha Kakahu property and stud is run by the Hargreaves family; with Gerald and Sue, and Tom and Anna the second and third generations respectively to run the operation.

The Angus stud was started in 1954 by K.H. Hargreaves, Gerald's father,Mr Hargreaves said when he took over he felt he ''began by floundering'' and it was not until he took a trip to America he ''changed his philosophy'' about breeding.

Kakahu used mainly United States bulls and they AI-ed rather than using embryo transplant because of the cost, he said.

He was ''very strict' in his criteria when looking to buy, choosing traits to give improved performance.

He was convinced the breed had developed to the point where good New Zealand genetics were little different to good American genetics, ''so we'll keep on this track''.

It was important to make beef profitable because dairy grazing was ''killing'' the prime beef sector and the only way to do that was through genetic improvement, he said.

The other studs represented at Kakahu were Fossil Creek, Goldwyn, Twin Oaks, Floridale and Farfield.