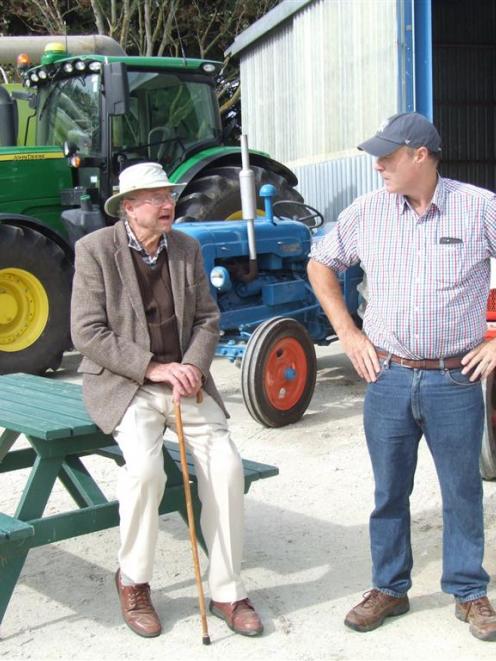 Hilderthorpe farmers Jim (left) and Chris Dennison reflect on changes to their family’s farming operation. Photo by Sally Rae.
"Lower Waitaki - The Community That Water Saved'' was the theme of a recent media tour organised by the Waitaki Irrigators Collective and IrrigationNZ and coinciding with IrrigationNZ's 2016 conference in Oamaru. Agribusiness reporter Sally Rae hopped on the bus to discover just what irrigation has done for the area and its inhabitants.

When Jim Dennison's father bought Drumena in 1919, the Hilderthorpe farm was in a "desolate state''.

Local women pitied his new bride moving to such a property to try to make a living.

Fertility on the farm was non-existent, couch grass was abundant and gorse hedges had expanded into the paddocks.

One of the early first crops only yielded two dray-loads of sheaves from 4ha, which was a disaster.

Farming Drumena was a struggle for years, Mr Dennison (90), who has lived on the farm all his life, said.

But with irrigation, the property has been transformed and expanded by the Dennison family to produce world-class crops.

Long-time residents of the lower Waitaki Plains, the Dennison family arrived in Hilderthorpe between 1868 and 1873, with four families settling in the area.

Before buying Drumena, Jim's father had been farming in Southland but walked away because of mud and rabbits.

Returning from the war, having nearly died from blood poisoning, he was "a pretty brave man'' to take on a new bride and a broken-down farm, his son recalled.

He learned to farm dryland to the best of his ability, increasing yields and ridding the property of couch.

He kept poultry for eggs, "in a small way'', but expanded that when there was an opening in egg production.

In the 1920s, large-scale egg production started at Hilderthorpe, growing to the stage where more than 20 farms were making a living from eggs.

A local co-operative was formed and crates of eggs were flown to Wellington each week.

It was not until the egg operation that he had to pay income tax, as dryland farming returns had always been so poor.

Jim Dennison continued with eggs when he married in 1953 and his parents retired to Oamaru.

But with the advent of caged hens and the requirement for chillers, he moved out of egg production, as did most others in the district, and bought more farmland instead.

When Mr Dennison first border-dyked 48ha of Drumena, he had sheep grazing in Southland, as there was a drought.

Traditionally, it was a sheep and beef operation with some cropping. When Jim's son Chris returned to the farm in the early 1980s, his passion was for arable crops.

Irrigation had been fully installed on the farm by that stage but they were not really harnessing it, Chris said.

In hindsight, they were carrying on the same practices as before, just adding water - using irrigation to avoid drought.

They learned to harness that water and lifted their game. Irrigation allowed them to expand their business, create more scale and invest in better technology.

Drumena now produced world-class crops, including some world-record-breaking yields, while the family own a neighbouring dairy farm, milking 750 cows, run by 50:50 sharemilkers.

The soils were heavy but the coastal environment was a natural air conditioner, giving a longer growing season for crops, Chris said.

Jim Dennison, who is sharp as a tack, still rides a two-wheel motorbike and spends most of his time planting native trees.

An area on the Lower Waitaki Plains pre-irrigation had 28 houses; in that same area, there were now 64 houses, he said.

The Dennisons' own property used to be run by Jim and Chris. Now there were nine people working on the property.

Chris and his wife Kay's son Harry intended to study at Lincoln University next year.

While Mr and Mrs Dennison were not putting pressure on him to return to the farm, his intention was to work his way through the dairy industry.

"He's got farming in his blood,'' Chris said.

Waitaki Irrigators Collective chairman Fraser McKenzie said one effect of irrigation was to lower the mean age of farmers because it enabled succession.

WIC is a collective representing large irrigation schemes and a group of independent irrigators that take water between the Lake Waitaki dam and the sea, with about 85,000ha irrigated by its members.

The Waitaki district had a "marvellous'' time during the 1800s, with a boom mainly driven by wheat, wool and later meat, with the first shipment of frozen meat dispatched from Totara Estate, Mr McKenzie said.

But then it went into decline.

Effectively, the community was "almost at subsistence level'' until the 1970s and 1980s when irrigation started to come onstream.

The history of the district in recent times was very much around what irrigating farmland had meant in terms of giving the community vibrancy, maintaining the level of services, and economic and social wellbeing, he said.