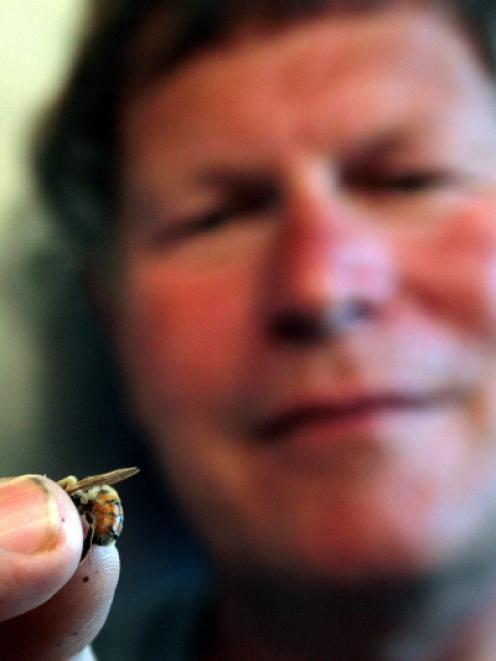 Betta Bees breeding programme manager Frans Laas prepares to harvest the genetic material from a drone. Photo by Dan Hutchinson.
Beekeepers are being warned to check the genetic diversity of their stock following the first stage of a nationwide survey that shows significant in-breeding.

The Sustainable Farming Fund project, administered by University of Otago associate professor Peter Dearden, has studied bees from all over New Zealand.

The early results show New Zealand's bee population was much more diverse than previously thought but that many beekeepers have serious issues with inbreeding.

''Beekeepers need to know about this problem and they need to do something about it,'' Prof Dearden said.

The problem stems from the almost total loss of New Zealand's feral bee population after 14 years of exposure to varroa mites.

Prof Dearden said feral bees used to ensure a ''continuous'' pool of genetics right across the country, that naturally found its way into managed hives.

Beekeepers could then improve their stock each year by selecting their best queens or buying them from breeders.

Bee colonies were protected from inbreeding because queens would bring feral genetics back into the mix every year.

Now, beekeepers who were not regularly introducing new genetics into their hives could end up with too many worker bees with the same sex genes (alleles).

Worker bees that have have two matching sex alleles are killed by other workers when they hatch.

Prof Dearden said serious inbreeding could make a hive unviable. He said the problem could be solved by simply switching queen bee suppliers for a couple of years, buying from a breeder who knew what sex alleles it had in its queens or bringing in hives from another beekeeper.

One of the country's main breeders - Betta Bees in Dunedin - supplies its 25 beekeeper shareholders and others with specially bred queens each year.

General manager David McMillan said they were trying to breed beneficial traits into their bees, including honey production, temperament, and varroa and disease resistance.

The firm selected the best 25 queens each year and all were DNA-tested to ensure they did not lose any sex alleles. Prof Dearden said New Zealand's bee population had at least 112 sex alleles, which was more than enough to ensure a healthy population.

He encouraged more beekeepers to get in touch and send their bees in to be tested.

''The more samples we look at, the better the [survey] results are going to be.''

It was the first time such a survey had been done in New Zealand; it was possible because of a breakthrough in 2006 when the honey bee genome was sequenced. Prof Dearden said it was not just small operators who were experiencing problems.

''Some of these operations are relatively big ones so they really are the major beekeepers in a geographic region.''