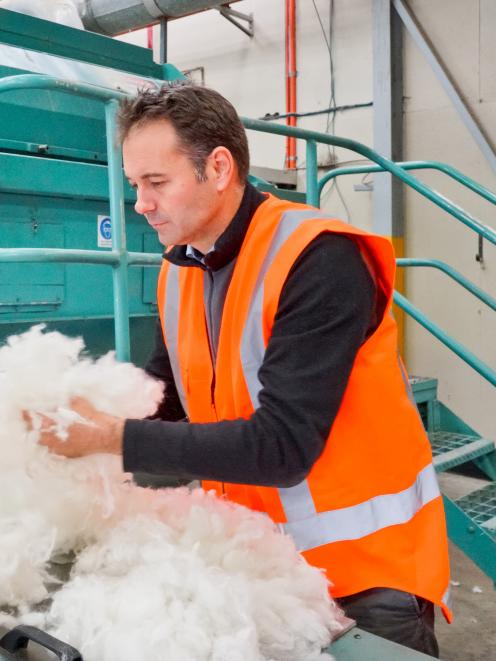 The company's annual report for the year ended June 30 showed an after-tax loss of $321,153, compared with a $1.48million profit the previous year.

The operating profit was achieved after increasing the provision for the write-down of the Wool Market Development Commitment ($1,037,495).

That was considered prudent given the level of arrears and the directors' commitment to ''timely and honest'' reporting to its stakeholders, chairman Mark Shadbolt and chief executive Rosstan Mazey said in the annual report.

During the year, the company had placed emphasis on connecting with disengaged grower shareholders.

That effort had achieved positive outcomes both in terms of WMDC repayment and re-engagement through wool transactions.

Mr Shadbolt and Mr Mazey said the financial year had proven to be one of the most challenging for the New Zealand strong wool industry.

Global demand for strong wool had continued to trend downwards and countries that had traditionally imported significant volumes of New Zealand wool, such as China, had increased their domestic wool production for local supply.

Wool exports to China had decreased by 48% over the past two years as local producers came on stream.

The impact of that on New Zealand's overall wool export effort was significant given China had traditionally represented a disproportionately large market for New Zealand wool.

Despite challenging market conditions, Wools of New Zealand had worked to maintain contracted wool volumes with international partners and in securing forward contract prices to provide growers with an ''element of certainty'' in a vulnerable market.

In a statement, Mr Shadbolt said the company had been ''relentless'' in pursuing targeted investments in R&D, the development of new technologies that added value to strong wool, pursuit of the right partnerships, providing different routes to market, securing forward contracts, championing of ethical and sustainable production practices and building a compelling brand story.

The company was in a strong position to further develop global commercial markets for initiatives and ''ground-breaking technologies'', such as new scour process GlacialXT and NuYarn, an innovation in spinning technology, as well as pursuing new initiatives through to commercial success.

Through grower roadshow meetings in August and September, shareholders were canvassed for their views on how best to recognise grower support through share options.

There was a high level of support for those grower shareholders who had been committed from capitalisation through to June 2018, by offering them a larger stake in the company.

The board intended to register a product disclosure statement by March 31, 2018, to allow for the issue of additional shares to all shareholders that had committed to paying the WMDC from capitalisation to June 2018, on the basis of one share for every dollar contributed.

Wool growers who were not shareholders were also being offered the opportunity to supply into the company's forward contracts, although shareholders would have preferential access.