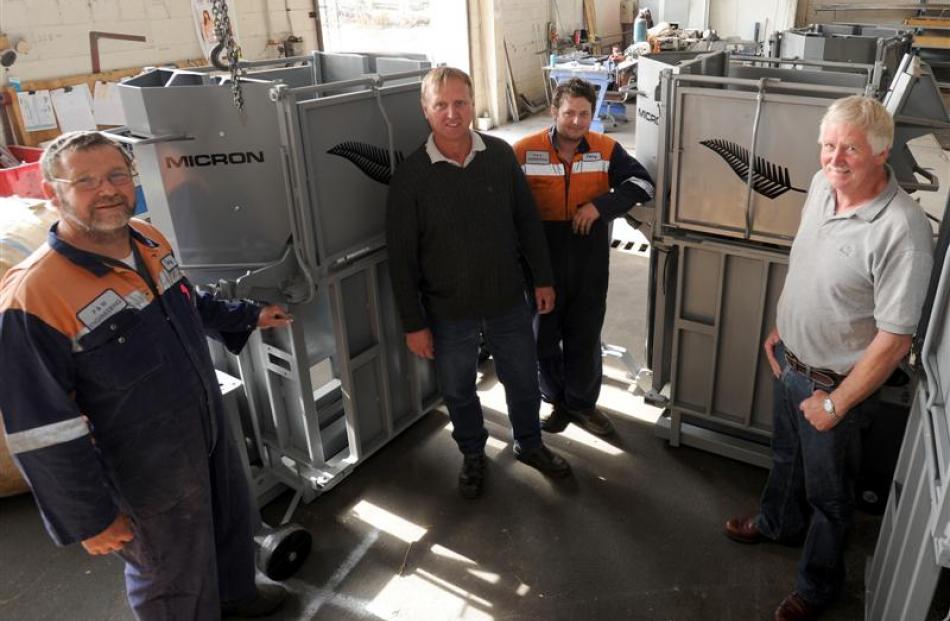 Tony Geddes (left), Bob Adams and Johnny Ellison, all from P and W Engineering, and RJ Wilson, from Shearing Services, with the Micron wool presses. Photo by Craig Baxter.

The latest in rural technology, equipment and ideas will be on display at the three-day Southern Field Days at Waimumu this month.

Among the technology will be the Mosgiel-designed and built Micron wool press, manufactured by P and W Engineering, which will be on display at the Elders site.

The company, which has been in business about 18 years, added wool presses to its engineering portfolio about two years ago.

RJ (John) Wilson, of Shearing Services, said there had been a need in the market for New Zealand-built wool presses.

The fully automatic hydraulic pinning Micron press, which used state-of-the-art technology, was built for New Zealand conditions and had been well proven and trialled by shearing contractors, Mr Wilson said.

Ten presses had been sold around the country and the company was struggling to keep up with demand.

The Southern Field Days were first held in 1982 and attracted 60 exhibitors to a 2ha site. Since then, the event has grown.

In 1996, the Southern Field Days bought 12ha next to the original site and became an incorporated society of the Eastern Southland Young Farmers Club. In 2004, a further 26ha was purchased.

As well as the wide-range of exhibitors, there will be a variety of working demonstrations and several special events, including the New Zealand Tractor Pull.

On the Thursday, Young Farmers members from the Otago-Southland region will compete in pairs to put up a permanent fence. The top team will gain entry to the national Young Farmers fencing final which will be held alongside the National Bank Young Farmer Contest week in Dunedin in May.