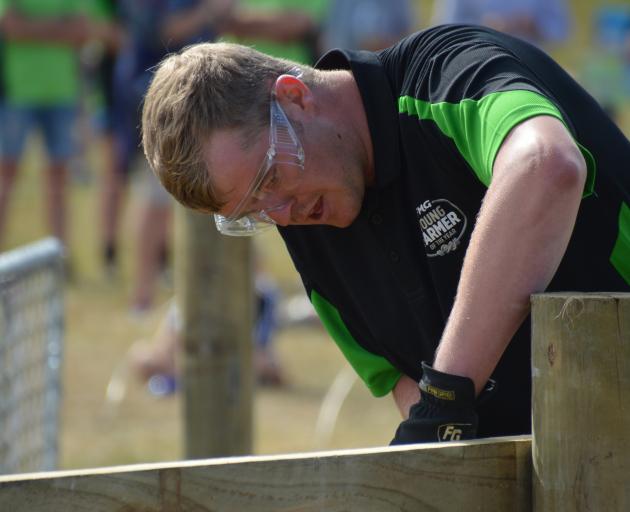 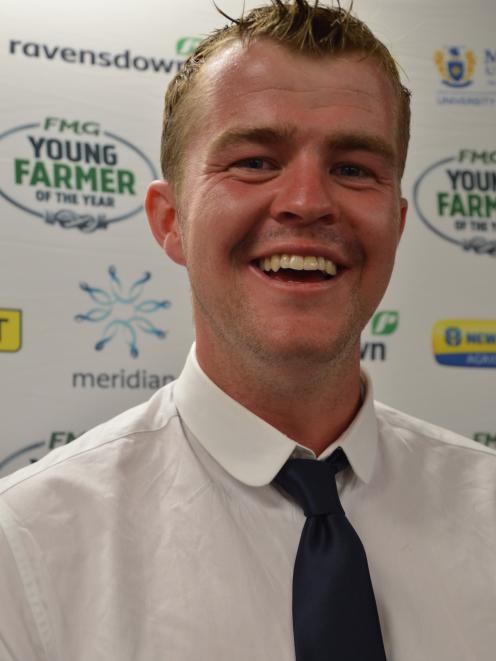 Arjan van't Klooster.
That should stand the Glenavy dairy farmer in good stead when he tackles the grand final of the FMG Young Farmer of the Year in July.

Mr van't Klooster (25) and his fiancee, Kelsi Chamberlain, own a 164ha 600-cow farm at Glenavy and are also lower order sharemilkers, milking 1200 cows on his parents' farm.

''Throughout my career, I've been thrown in the deep end quite often. [This is] another example, I guess,'' he said.

Mr van't Klooster did not expect to be top of the experienced field in the Aorangi regional final, a region that has produced six grand winners in the past 14 years, including the last two winners, Athol New and Matt Bell.

So he was ''lost for words'' when he won the regional final in Methven. It was his second regional final; he was fourth last year.

In this year's regional final, he won the Agmardt Agri-business Challenge, where contestants faced a tough technical exam, as well as the Massey University Agri-growth Challenge, where he was grilled by a panel of interview judges. He collected $12,500 in prizes, including a motorbike.

Now the focus was on the grand final in the Manawatu on July 6-8, where he will be up against six other grand finalists from throughout the country.

''I remember seeing a regional final years ago at the North Otago A&P Show, as a kid ... the effort those guys went through. I thought, 'I could do that one day.' I have now, many years later,'' he said.

Winning the grand final would be ''amazing''.

He was looking forward to it but acknowledged he would have to put in ''a fair bit of effort'' in the interim.

At university, he was ''quite a procrastinator''. He imagined studying could be another of those things put off until later, but knew he could not wait too long.

Mr van't Klooster was busy before the regional final and admitted he should have put more preparation in.

He expected he would have to do a lot more delegating and also be a bit more organised.

His strength was his knowledge of the dairy industry and his major weakness was the sheep industry, having had little experience with it.

The reality of a competition like Young Farmer of the Year was it tested contestants on all aspects of agriculture, not just the ''big three'' of sheep and beef and dairy.

''You just don't know what's coming, whether it's pigs or poultry or beekeeping or forestry ... it's hard to prepare yourself,'' he said.

The best way, he believed, was to go through previous questions and also ''pick the brains'' of previous contestants.

He had a good support network - laughing that he probably had one of the ''noisiest'' group of supporters at the regional final - and his family and friends were right behind him, he said.

His partner had already been quizzing him in the car on the way to the regional final.

At just 25, he was running a substantial operation and in charge of eight staff. He could deal with ''a bit of pressure'' and, as a volunteer firefighter with the Glenavy brigade, he was again used to high-pressure situations.

Mr van't Klooster's involvement with Young Farmers began when he was at Waitaki Boys' High School.

It waned while he was at Lincoln University, where he studied for a BCom in agriculture.

He joined the Glenavy club when he returned home to farm.

The club provided a great social network outside the farm, as did his fire brigade involvement, he said.

What he knew about the dairy industry he had learned from his father, Gert. Right from ''day one'', as a young child, he enjoyed going out at 5am and getting the cows in for milking with him.

''I feel I was a lot more enthusiastic then than I am now,'' he quipped.

But he had not been pushed into the dairy industry; rather, agriculture and being outdoors was a passion, and dairy just fitted with that, he said.

Slowing down a little was a goal, as was spending more time with his partner and relaxing more, as he was aware of the risk of burning out.

He encouraged other young people to get involved with Young Farmers, saying it was a good group of like-minded people who enjoyed having fun and also understood the demands of the agricultural industry.