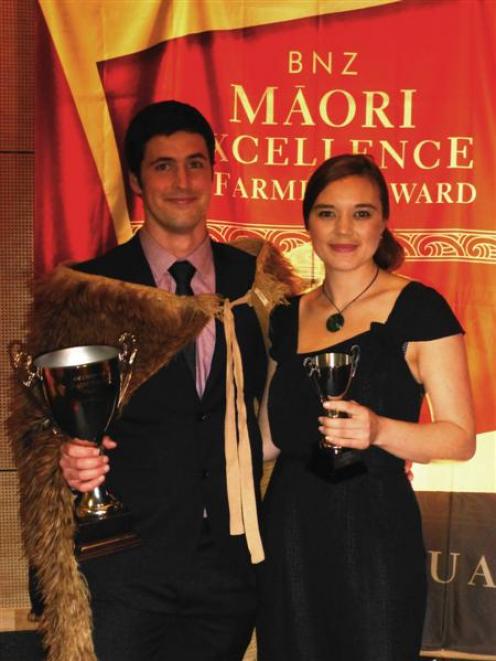 Originally from Whangarei, he moved south with his partner Bettina Tolich in 2009, because of the opportunities in the industry.

Having recently moved from Winton, the couple, who have two young sons - William (5) and Manu (15 months) were now in their first season 50-50 sharemilking 1150 cows at Ranfurly, with the support of Mr Reid's parents.

Farm ownership was their goal, within five to 10 years, and Mr Reid also hoped to help others ''coming up the ranks''.

He was drawn to the industry as it was something he had grown up with and found familiar, plus it enabled progression. It also had various characteristics that kept it interesting: plant and machinery, staffing, animals and land.

This season, the couple would employ four staff full-time and they were still looking for a worker.

Ms Tolich did all the calf rearing and much of the book work.

Mr Reid, who is studying towards a national diploma in agribusiness management through Primary ITO, was encouraged to enter the Young Maori Farmer of the Year award by his training adviser.

It was easy, as a dairy farmer, to ''get quite stuck in your own bubble'' so it was an ''awesome'' opportunity to meet other, like-minded people and network, he said.

Being named winner came as a surprise and it was ''very humbling''. The Ahuwhenua Trophy Awards evening, in Tauranga, was also ''amazing'', he said.

Lead judge Peter Little, manager of land development at Te Puni Kokiri, said the high standard of entries this year made selecting the finalists a difficult exercise and generated much debate among the judges.

Applicants were assessed on a range of skills and attributes including their commitment to farming, training and education.

Mr Reid said Maori naturally had many key attributes that made them successful farmers.

''We have a good sense of humour; make light of any situation no matter how stressful; we have an easy-going attitude where we give anything a go; and also hardness to stick it out and get the job done,'' he said.

The runners-up were 50-50 sharemilker Joshua MacDonald from the Waikato and herd manager James Matheson from Gore.