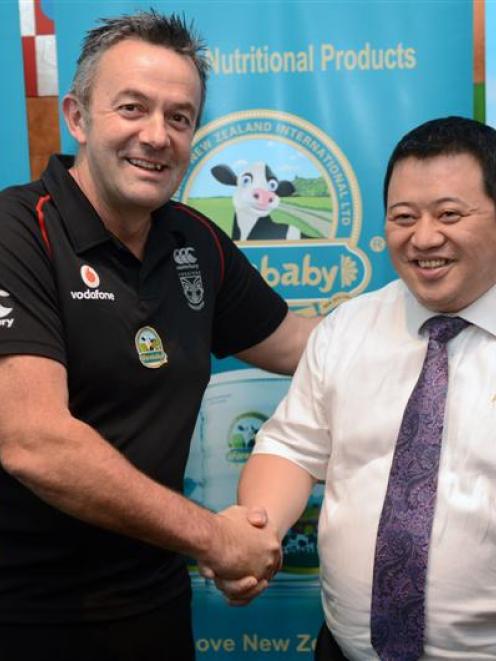 The Chinese businessman and sporting enthusiast has visited 60 countries, yet fell in love with New Zealand, captivated by the "clean, green image".

Mr Shao is now principal of Fernbaby, a company formed to provide a locally-made high-quality alternative to the Australian and Singaporean-made infant formulas, which it says dominate the New Zealand market.

It might be the "new kid on the block" but the company's assistant director John McCaulay said it was well-resourced and ambitious.

It was recently announced that Fernbaby would be sponsoring the Vodafone Junior Warriors in the national youth competition in 2013, before becoming a full sponsor of the club's NRL team in 2014 and 2015.

While it was a "substantial investment", the company needed to create a brand at both ends of the market - China and New Zealand, Mr McCaulay said.

As well as establishing Fernbaby in New Zealand, Mr Shao is managing director of Sotx, a company which manufactures badminton equipment. Sotx has a long history of encouraging sport, including sponsoring the Chinese junior national team, and of tours of China by European representative badminton teams.

Several shipments of Fernbaby product have already been made and, by the end of this year, the company expected to be exporting 80,000 to 100,000 cans a month into China. It would also be available in many of New Zealand's supermarkets.

Chinese consumers were looking for brands they could trust.

Having attended a mother and infant trade show in Beijing, Mr McCaulay was very impressed by the strong family values in China and how "incredibly precious" children were.

He was in a supermarket in Singapore a few weeks ago where he encountered about 20m of infant formula on the shelves, stacked about 2m high.

All probably contained "quite a lot" of New Zealand dried milk, but there was no evidence that New Zealand was represented on the shelves, which was a reflection of how New Zealand's dairy industry worked, he said.

Fonterra had done a "brilliant job" but its role was mainly to cope with the flush of milk supply, build large milk powder plants and sell it as a commodity to the world.

Investing in brands was not the priority, Mr McCaulay said.

Fernbaby's role was not to build plants to make the milk powder - it was contract-manufactured by Fonterra and listed company New Image - rather it was in distribution and marketing.

It was not just about the Chinese market. Other potential markets were being explored, including India, Korea, Japan, the Middle East and possibly Africa.

It was a premium product and the potential was "quite significant".

While the initial focus was on producing infant formula, the company was positioned to further develop its range of products.

The company's initial commitment to its branding and marketing systems had a budget of $1 million "so we are very serious about what we are doing", Mr McCaulay said.