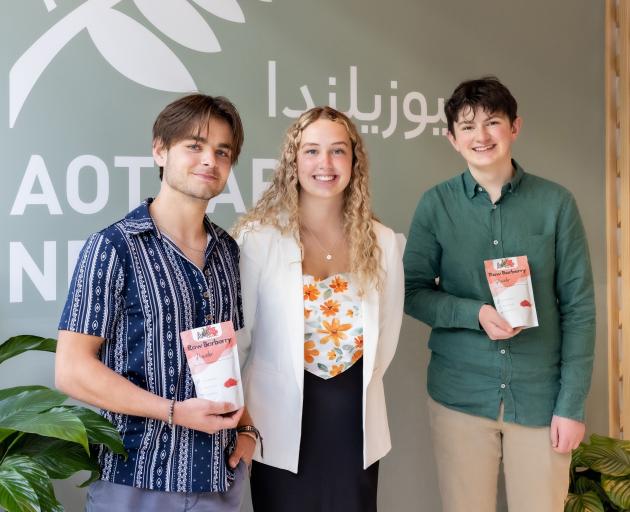 Abalro founders (from left) Alex Livingstone, Abby Green and Robert Donohoe, all of Dunedin, in the New Zealand Pavilion at Expo 2020 in Dubai this week. PHOTO: WALAA ALSHAER/EXPO 2020 DUBAI
Abalro Health is on a mission for trade.

Late last year, the Dunedin company was named the Young Enterprise Scheme’s (YES) company of the year. Now, its founders are in Dubai trying to make connections for exporting their product.

The trio started the business nearly two years ago while attending Bayfield High School, importing barberries from Iran to create a supplement powder.

The group was selected for the trip after winning the Global Kaitiakitanga Project, a competition aimed at promoting sustainability in business run by NZTE and YES, last year.

The six-month-long expo, which was postponed a year due to the Covid-19 pandemic, started in October last year and has representatives from more than 190 countries trying to build trade and foreign relationships.

Speaking from their hotel this week, Mr Donohoe said the trip had been very educational.

"We are very happy to be here. It has been great so far."

The group had spent most of their time learning about the UAE market, which included meeting New Zealand’s trade commissioner to the Middle East and other international trade officials.

The group members were also New Zealand’s youth ambassadors at other cultural events at the expo.

In their spare time, they were also trying to spend as much time as possible at the New Zealand Pavilion — New Zealand’s base at the expo — connecting with business leaders.

Subject to a negative pre-departure Covid-19 test, the group would leave Dubai tomorrow.