Fourth Dunedin venture for AND 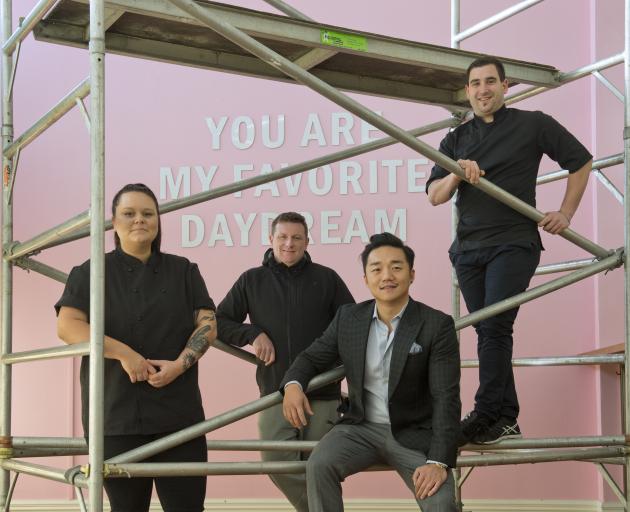 Chefs Sam Harris (left) and Greg Piner, group sous chef Julien Delavoie (far right) and owner Andre Shi (front) work on Deja vu decor before opening. Photo: Gerard O'Brien
AND Hospitality Group has emerged as one of the biggest players in the Dunedin food scene, investing in its fourth venture in the inner city in as many years.

Its latest offering is Deja vu, a brightly hued Asian street food restaurant, which will open its doors in September on the site of the former Madame Woo restaurant.

Not one to go half measures, Andre Shi - the man behind the popular Vault 21 and Catacombs nightclub - has recruited Sam Harris, the former sous-chef at Peter Gordon's The Providores and Tapa Room in London to develop the fusion-influenced menu.

The group also has the considerable services of French sous chef Julien Delavoie, a specialist in classic French pastries.

Mr Shi said Deja vu would have seating for 100 diners, but would be quite a different offering from the 170-seat Vault 21.

"The menu will have some similar influences, but it's a very different eating experience. The decor promotes a bright, lively feel with plenty of neon style lights," Mr Shi said.

This does not, however, extend to the more private dining area downstairs, the Continental room, which was influenced by Mr Piner's love of John Wick.

Mr Shi said the expansion of AND's restaurant empire was based on a belief in the growth of the city and increasing demand for good eateries, entertainment and night life options.

"I've always backed Dunedin and, in particular, the Octagon where everything that happens in Dunedin, happens here," Mr Shi said.

He believes the next five to 10 years will usher in major change to the city as it is discovered, by local and international tourists.

"The stadium makes a big difference. The last Ed Sheeran concerts injected an estimated $38million into the economy over Easter.

"That was new money during what is otherwise a quiet time."

The former Mount Aspiring College pupil firmly believes in quality - people and products. That philosophy was at the heart of his vision for Vault 21, which emerged out of the former Ra Bar, acquired by AND in 2013.

"Our main focus was to combine street flavours with locally-influenced produce, so it's a fusion menu served in a chic environment," he said.

Mr Shi's attention to detail - and the human element - led to the inclusion of heated seats to counteract Dunedin's cooler winter temperatures.

He and executive chef Greg Piner are not afraid to try new things either, trialling locusts which proved to be a tremendous success.

He admits, however, that it can be a tough industry.

"There are a number of restaurants on the market. It's important to understand your market and your pricing. People want to enjoy themselves but they also want value for money," he said.

Compliance and operational costs were also going up, in tandem with reduced liquor trading hours, he said.

"We now employ around 100 people, so minimum wage is a big thing in our industry. Transport costs also have a direct impact on our supplier costs.

"Margins are thin, so any external impact needs to be carefully managed," Mr Shi said.

"At the same time, it's a lot of fun and it's very rewarding."