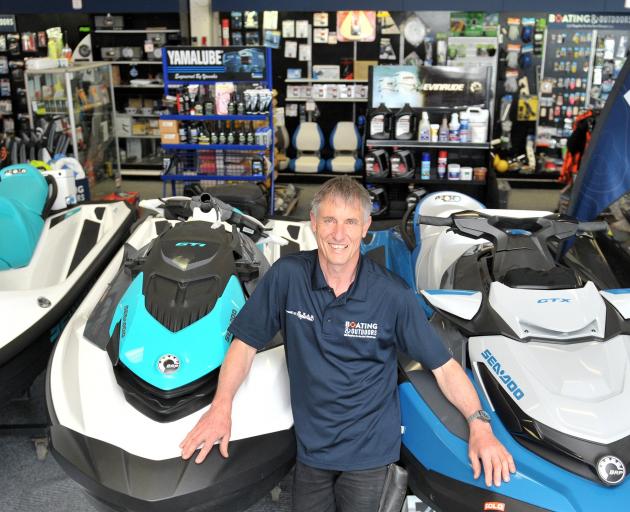 Read Marine owner Latham Wardhaugh. PHOTO: GREGOR RICHARDSON
Demand for boats is the highest it has been for the 33 years of one Otago boat builder’s time in business.

McLay Boats owner Steve McLay said closed borders had likely led to the boom in demand for boats, as things had been quiet in the period before the Covid-19 outbreak.

"During Covid, after Covid was very quiet, obviously all of the uncertainty.

"A month or two after, it started to get going and it’s just gone gangbusters ever since. Both in New Zealand and we’ve got dealers in Australia and they’re just screaming out for boats, too.

"Virtually all our dealers in Australia and New Zealand have sold all their stock and have nothing to sell, which is unheard of."

He said the company had more forward orders on its books than it had had for 33 years.

"We’re booked out to August/September next year. Orders [are] still coming in the door so it’s not going to be very far away from being fully booked the year ahead, by the look of it."

Mr McLay said managing customers’ expectations about when they could get a boat was going to be difficult.

"Everybody thinks ‘oh well I can’t get one before Christmas, but you’ll have it done by Easter’. Well there’s only a limit over what you can do before Easter or before winter. It’s going to be challenging ... but I’d rather have it this way than have no work, of course."

Supplies, particularly electronics and rigging kits, were hard to get hold of.

"What you’ve got to do now as a manufacturer is we’ve just got to make sure we’re ordering months in advance and if some stock comes early, well so be it.

"You just can’t order off the shelf like you used to be able to."

Mr McLay said he expected the marine industry to continue to be busy for the next 12 to 18 months.

Read Marine owner Latham Wardhaugh had a straightforward response to people who walked in the door hoping to walk out with a new boat.

The marine retailer had orders for boats that were going to be fulfilled by about February and March.

He said his company had taken "a hell of a punt" in July and ordered ahead, so the store was well stocked for life jackets.

"Fortunately we ... took a bit of a risk, and now we’ve actually got some stock.

"Now people have got to realise if they don’t come in and buy what we’ve got, they won’t get [it]."

Sea Doo jet skis were easier to get at the moment than boats, Mr Wardhaugh said.

He said the firm had ordered a bulk amount of the jet skis, which arrived late.

"So I’ve still got some of those, only some models. I’ve got three going out this week."

When borders did open, the second-hand boat market might get an uptick in supply, Mr McLay said.

"There will possibly be a few people who say ‘oh, I’ve bought a boat, it’s not really me’. So there might be a few second-hand ones come on."