Genuine opportunities for a2 Milk 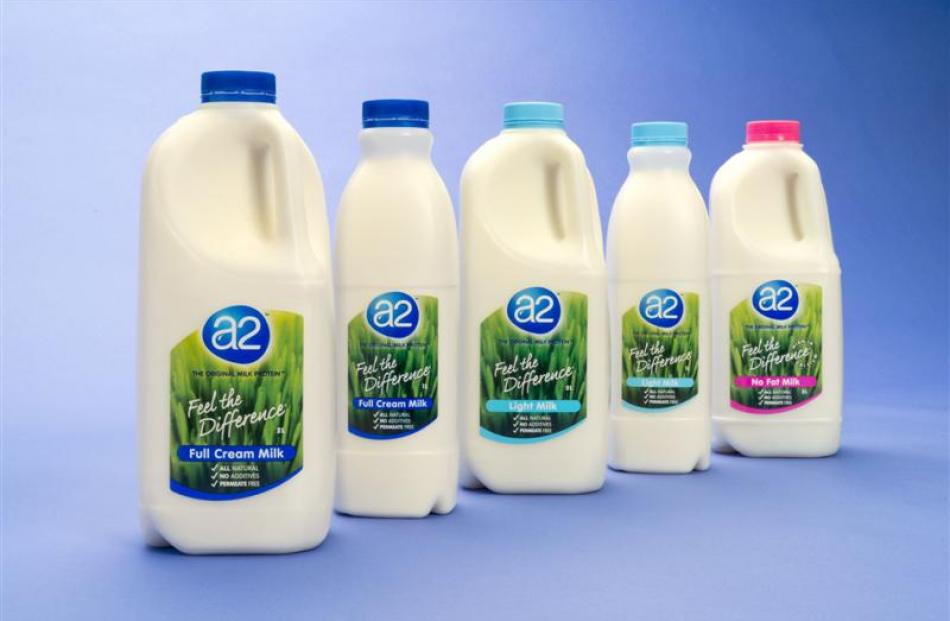 The a2 Milk Company has broad-based growth opportunities. Photo supplied.

Craigs Investment Partners has initiated coverage on The a2 Milk Company with a hold recommendation on the shares given the broad-based nature of growth opportunities.

The company will change its name from A2 Corporation to The a2 Milk Company on April 8. Managing director Geoffrey Babidge said the new name ''instantly and consistently'' described the values and mission in a way the current trading names did not.

''It reflects our journey from early research and entrepreneurial pioneers in New Zealand to a unified global identity,'' he said.

Craigs broker Chris Timms said a2 was ''a little bit frothy'' but genuine and broad-based opportunities existed for the Dunedin-founded company.

''A2's demonstration of value associated with A2 milk in Australia has established credibility for potential to expand into new markets. Opportunities in the United Kingdom and infant formula are being implemented and potential exists in the United States, Southeast Asia, New Zealand and increased product categories.''

Progress to date remained limited to Australia, with UK and infant formula opportunities still in their infancy, he said.

Despite a challenging valuation, Craigs rated the shares as a hold, underpinned by confidence in the sustainability of the company's competitive advantage and a broad opportunity set with capacity to execute.

There was significant value for a2 joining local partners with established routes to markets and distribution chains to accelerate the otherwise lengthy and difficult part of of the value chain.

There was a strong base on which to market A2 milk to consumers and opinion leaders but a balancing act was required, he said.

''The science supporting A2 milk is an important differentiator in its approach to marketing its proposition. However, there are limits in what a2 can say in direct marketing to consumers, which is why it has focused on simple messaging around general benefits that have proven to resonate with consumers in Australia.''

In addition, the company made considerable investment - with longer payback - in public relations activity focused on healthcare practitioners and other opinion leaders who had the ability to influence consumer decisions over time. The increasing use of the internet by consumers was an important element of a2's public relations strategy, Mr Timms said.

The company was increasing focus on ensuring sufficient people resources, something critical for investor confidence in the ability to execute in existing markets while pursuing new ones.

With demonstrated success in Australia, and a better capitalised business, a2 had been focusing on increasing its staff capacity.

''We view this as critical, given the number of opportunities that a2 is pursuing and it provides us with increased confidence in the ability to execute.''

Given A2 was a ''natural phenomenon'', some focus was required on the barriers to entry and the sustainability of the company's competitive advantage, he said.

It was also important to have some understanding of the status of the science associated with A2 milk and its limitations, given it supported a large part of the company's broader marketing activities.

• Science supportive of digestive and health benefits associated with A2 milk but was not definitive.

• Patents that provided a2 Milk with first-mover advantage in the commercialisation of the A2 milk opportunity.

• Trademarks, brands and messaging on A2 milk and its benefits that provided the company with an advantage in the marketing of A2 milk beyond the initial patents expiry.

• Knowledge and know-how associated with the commercialisation of A2 milk.

• Goodwill and a genuine ability to claim The a2 Milk Company as the original supporter and source of A2 milk.

Mr Babidge said a2 Milk was the fastest growing major milk brand in Australia. It had achieved more than 8% market share and was helping increase milk consumption. A2 milk products were also available in the UK, New Zealand and China in several forms including liquid milk, yoghurt, fresh cream and infant formula.

At a glance
• Conventional milk today may be present as one of two primary variant types, A1 or A2.
• A1 and A2 differ by virtue of a single amino acid in a chain of 209, this has an impact on the protein structure and subsequently its digestion.
• There is evidence to suggest the difference in structure between A2 and A1 beta casein variants can lead to a difference in their breakdown during digestion.
• Consumers of A2 milk commonly report a link between A2 milk and improved digestive comfort relative to milk containing the A1 beta casein - in addition to other benefits relating to adverse milk responses