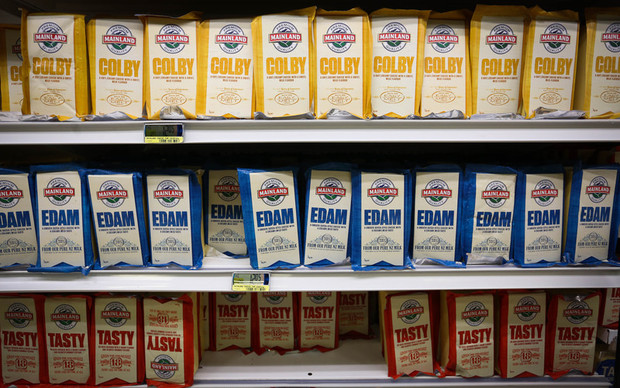 A 1kg block of Tasty cheese is now selling for between $16 and $18 at the main supermarket chains.

Fonterra said since the pandemic, there had been a significant increase in demand for cheese in New Zealand and globally.

It said global cheese prices have jumped 15 percent over the last year.

In New Zealand, the company said it held retail cheese prices, for brands like Mainland, for most of the last year.

But in May, it increased the average price per block by about 50 cents.

The rising price of dairy products on supermarket shelves has meant some foodbanks are no longer receiving regular donations of milk and cheese to give to those most in need.

"We've had no milk to give, no cheese, those items are either selling in the supermarkets or maybe going to some foodbanks but certainly our foodbank hasn't seen any of those items since the beginning of this year," he said.

ANZ rural economist Susan Kilsby said the price of cheese at local retailers was affected by global demand which had been high, resulting in prices rising.

"People are looking to consume more dairy products for health reasons. The underlying market is really strong for all dairy products and that's what we're starting to see flow through here to our supermarket prices in New Zealand."

She said the wholesale price of cheese was not yet at record levels.

Ridiculous!...Producers of petroleum ensure their own citizens get cheap fuel. The price of bananas is also much lower in the country they are grown in.

Fonterra SHOULD be making cheese and milk one of the cheapest items to buy at the supermarket by subsidizing our market via the price they charge the overseas market.
We keep getting told New Zealand is a tiny market, so the cost to Fonterra would be minimal....Shame on you FONTERRA!

Greedy people. Taxpayers bear a lot of costs for these farmers (for example, recent floods in Canterbury). This is what they get in return.

What would be interesting to know is how much Fonterra are selling the cheese to the supermarkets for and how much markup is the supermarket adding. I can only guess but I'm guessing they will be adding at least 100% markup as a minimum, probably more. They maybe as low as 75% when they are selling it on special but you can guarantee they are pushing their profits to the absolute maximum.

You are right.....A little known fact is that supermarkets also tell their suppliers to reduce the price at which they sell to supermarkets, during any 'specials'.
So the supermarket never actually 'takes a loss' as they simply don't pay the same price for goods they purchase!

The NZ consumer is being ripped off !

Always we hear the same old 'market prices' argument advanced by the suppliers. Given the prices here are often HIGHER here than the identical product, which will have travelled half way round the world, across borders and through multiple other parties to reach that cheaper price on some distant shore, it simply doesn't add up!

They're paying about 8 quid in the UK for a 1kg cheddar cheese, that's about $16 NZ, so about the same.

Somehow the shipping, traffic and tax costs seem to reduce the price in overseas markets. And pls don’t say they import large amounts and that reduces the price point. Singapore is around the same population size as NZ and they don’t eat as much dairy.

That simply shows how the supermarkets are ripping us off.

The public here pays for the public cost of dairying: polluted waterways etc - As a kid I swam everywhere, now there are few places to take kids and dogs, and let's not even talk about the poor posoned aquatic life and birds; and now the possibility of high bowel cancer in the NZ population tied to the nitrate fertilizers. NZ subsidizes dairy. Yet Fonterra gauges the NZ public. Other producing national conglomerates ensure discounts to their citizens because they recognise their citizens contribute/pay in many social ways to the product. Other governments legislate to keep certain locally produced, highly profitable food staples affordable for all citizens. Why not Fonterra and NZ? This is a food basic, not just for the wealthy.

Kiwis gouge kiwis on everything here. Food, fuel, autos, clothing, building suplies...etc. The price of living on an island nation.