Innovator carving out a place for plant-based ‘meat’ products 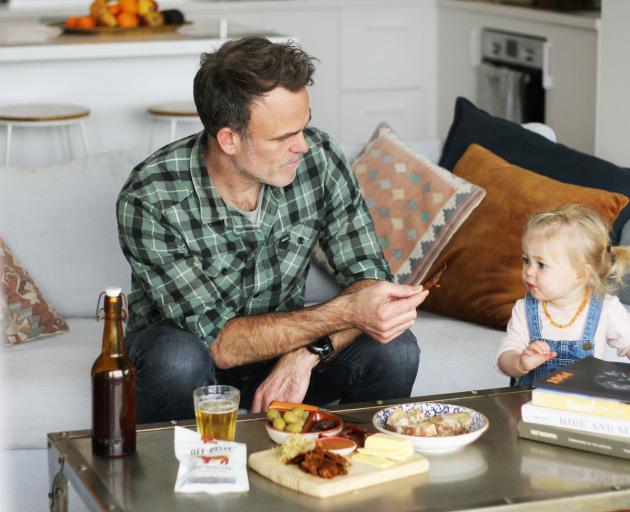 Entrepreneur Jade Gray, pictured with daughter Raphy, has launched a plant-based jerky range. PHOTOS: SUPPLIED
Entrepreneur Jade Gray thinks outside the square. He talks to business editor Sally Rae about his latest venture and his desire to take New Zealand farmers along for the ride.

The Twizel-born entrepreneur successfully co-founded a pizza business in China, a country in which he lived for 20 years and where he was involved with wide-ranging initiatives, from helping set up a beef cattle joint venture to building a gym franchise.

He admits he was used to being ‘‘a bit ridiculed at times’’; he was laughed at for learning Mandarin at the University of Otago. Back in 1994, Japanese was all the rage but it did not have any appeal for him.

He was also laughed at for looking at the carbon footprint 20 years ago and now, back living in New Zealand, he is urging care to be taken.

The wool industry laughed at those that suggested it could be disrupted by man-made fibre, he said.

‘‘How do we learn from that lesson?’’

Gung Ho! Pizza was the brainchild of Mr Gray and a business partner, their first store in Beijing opening in 2010. When his business partner left in 2015 to head back to Australia and Mr Gray carried on, before selling the business in 2019 to return to New Zealand.

Its first product, which has gone on sale this month, is a jerky made using protein sourced from fava and peas.

It was New Zealand’s first-ever cut of analogue red meat but that was just the start, Mr Gray said. It opened up an opportunity to create a range of high-value products from steaks to chops.

It was a business venture that he was going into with his ‘‘eyes wide open’’. After 20 years in China, Mr Gray was ready to come home and look at the next chapter in his life and what he was really passionate about.

That concerned climate change and how to address it in New Zealand. The key was looking at greenhouse gas emissions from agriculture; there were multiple ways to attack that and one way was through plant-based food, he said.

Rather than feeling threatened by it, it was an ‘‘incredible opportunity’’, Mr Gray said.

At first glance, it might seem he was a farmer’s foe, rather than friend, he said, but he was quick to dispel that notion.

‘‘There are parts of New Zealand where the land is better suited to growing plant protein rather than animal protein.

‘‘Off-Piste Provisions wants to ensure that Kiwi farmers are along for the plant-based ride, growing local produce to cater to New Zealand’s growing number of vegans, reducetarians and flexitarians.’’

In July, Mr Gray spoke to 300 farmers and growers at the Foundation for Arable Research’s conference at Lincoln and handed out samples. There was ‘‘great feedback’’ from those attending, who were fascinated and wanted to know how to get on board.

While it was still early days, the product was getting a ‘‘bloody good hit rate’’ from those who had sampled it.

Ingredients had to be grown somewhere — there was much talk about resilient business models, especially on-farm — and those that were against it, potentially did so at their own peril, he said.

Founding a business through Covid-19 was ‘‘bloody hard’’, although food had really been brought to the forefront during the pandemic.

People were looking at food security and disruption to logistics channels. Many countries were looking to future foods as a solution.

New Zealand, as a whole, was so well placed to jump on the new transition, Mr Gray said.

During his last two to three years in China, he had started to see change in the market, especially among the younger generation and also communications coming out of the Communist Party. All were aligned to the message about a need for a more plant-based diet.

The Communist Party had made a statement that it wanted to reduce Chinese meat intake by 50% by 2030, which was a ‘‘phenomenal’’ number.

Doing some more research, he found there were messages about health, and food security — former United States president Donald Trump coming into power had stoked fears of the possibility of a Cold War for the Chinese.