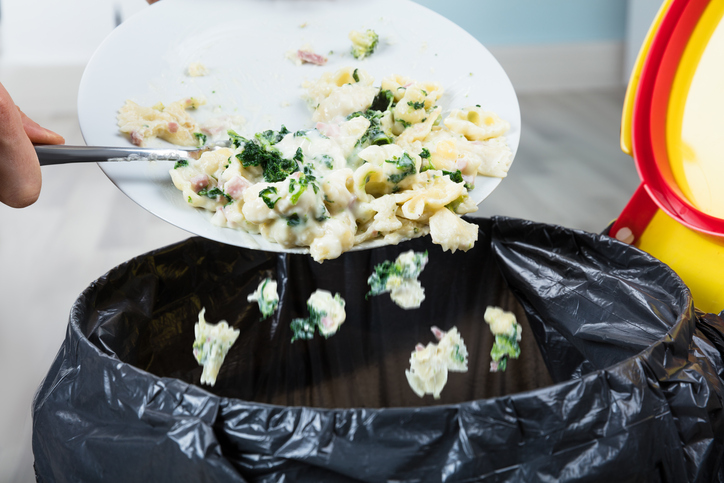 Kiwis waste $1.8b worth of food each year. Photo: Getty
New Zealand's largest mall, Sylvia Park, generates 600 tonnes of waste per year - around half of which is food waste.

The Auckland mall fills up 10 three-cubic metre bins of waste each day, the equivalent in weight of two Boeing 747 aircraft each year, and chews through enough cardboard to fill eight swimming pools daily or clad 3800 houses per year.

Waste from its food court fills up 60 bins each day which are disposed of three times a week.

Food waste is a $1.8 billion problem in New Zealand - around an eighth of what Kiwis buy each week being thrown away. 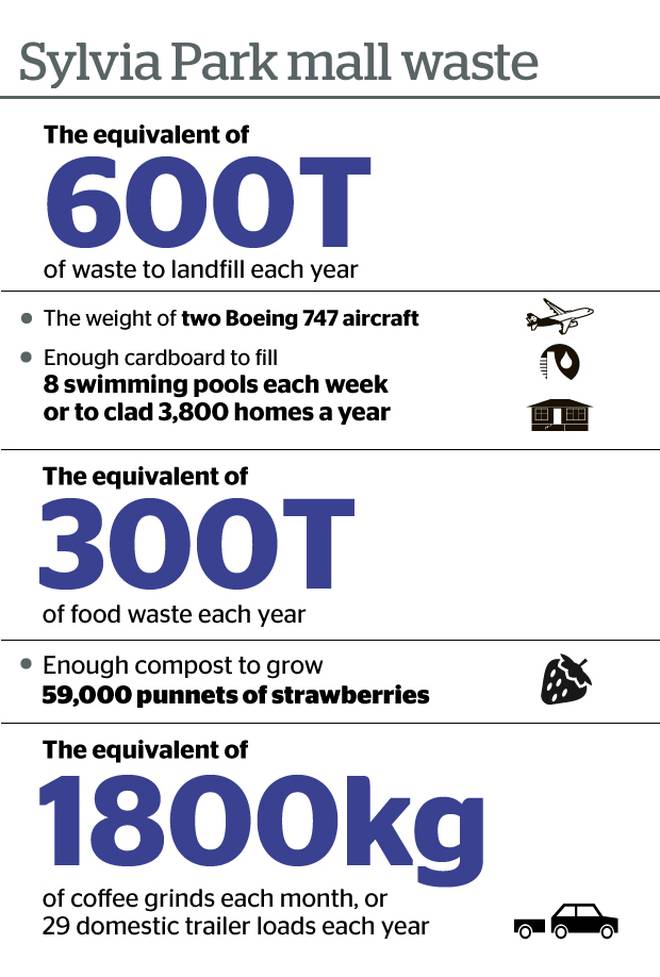 Graphic: NZ Herald
Research shows those who eat out more than three times a week are the more likely to waste food, wasting around 21 percent of all food purchased.

Food waste which goes to landfill rots, releasing methane - a greenhouse gas, which is harmful for the environment.

While household food waste can be easily managed through composting, for the commercial world, most waste from cafes, restaurants and food operators, ends up in landfill.

"A lot of the food we throw away is what we call avoidable food waste - food that could be eaten. We're not necessarily throwing away peelings and scraps, we throw a huge amount of edible food away," Marshall said.

"Construction waste, when it goes to landfill it just sits there, it doesn't break down, whilst that's not great it is not contributing to climate change. Food going to landfill is a major source for emissions from the waste sector."

Each year 2.5 million tonnes of waste is put into landfill in New Zealand.

Marshall said it was hard to quantify how much of that was organic waste as Government does not collect figures on it.

In terms of scale, New Zealand's 1.4 million families waste more than the country's 20,000 cafes and restaurants and 300 supermarkets combined, however, repurposing businesses' food waste was a challenge, she said.

Auckland has two commercial composting facilities making collections, but cities such as Christchurch, Queenstown and Dunedin there are none.

"Restaurants can generate a reasonable amount of food waste per week and per year, and you need a commercial facility that can take that and process it.

"The big challenge is access to infrastructure and if you do want to divert your food waste to landfill, particularly for businesses, you've got somewhere to put it.

"[Many businesses] would love to send their waste to a composting facility but often there isn't one there. Lack of access to the right infrastructure, particularly in the South Island, is trickier whereas in the North Island there are a number of facilities that do accept food waste and there are collections."

Government should enable more composting facilities to be set up, she said.

Around four percent of all carbon emissions are from the waste sector - most from food and organic waste, Marshall said.

Kiwi Property national facilities manager Jason Happy said the NZX-listed property company, which owns and operates Sylvia Park mall and other shopping and dining precincts around the country, was focused on reducing the waste it sends landfill.

It began a waste management programme in 2003 and now turns its food waste into compost and by-products like coffee grind into fertilisers.

Kiwi Property generates 900 tonnes of waste each year, or 8200 kgs per day, from its various retail sites.

Its shopping centres have reduced their waste by 9 percent since 2012 and the company has an A- carbon rating, the highest rating of any firm listed on the NZX.

Happy said it did not cost "much" to run its waste management plan, and retailers in its precincts were increasingly getting onboard.

"Any form of a recycling programme takes a good deal of constant maintenance and retailers are engaging... With the younger generation coming through there's a much higher expectation that should be the case and so that engagement is getting a little bit easier," he said.

Sylvia Park mall divides the waste generated from its food court into organic waste, plastics, cardboard and glass to ensure waste can be repurposed.

"We did look at work farms but the quantities of worm farms we'd need were just extraordinary, we're talking thousands to service this centre, and we simply don't have the space as well as the maintenance required for those to be managed properly. Domestically they're great but on this kind of scale they are impractical."