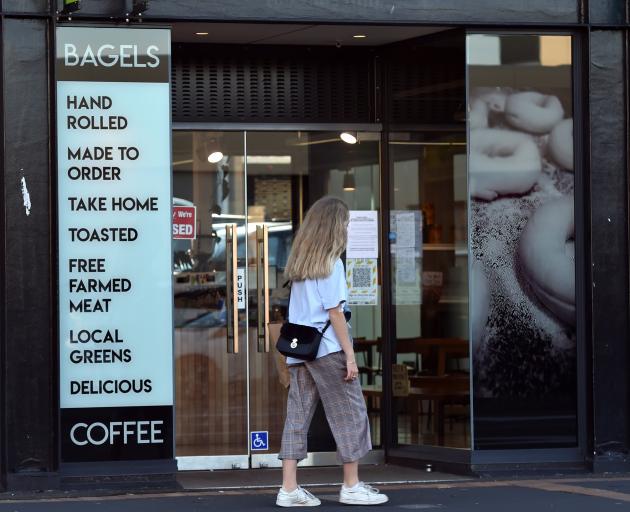 Orders online ... Beam Me Up Bagels shop in Great King St. The business has built its own online platform for customers to order from the menu.PHOTO: PETER MCINTOSH
Ordering food online or via an app was mandatory a few weeks ago, but will that continue with no Covid-19 restrictions for hospitality businesses?

The answer from Dunedin cafes and restaurants is mixed.

Regulr — an app provided by point-of-sale company posBoss — has been the system of choice for many Dunedin hospitality businesses, while others such as Beam Me Up Bagels have built their own online platform for orders.

The bagel makers have built an ordering system into their website, which sends a text or an email to the customer when their food is ready.

The popular stores in the city and in North East Valley are famous for having queues of customers waiting for bagels.

Best Cafe owner Jess Marks said she initially went with an app called Bopple but for technical reasons and because she already was using the posBoss system they moved to using Regulr.

‘‘It was almost a bit too busy — we had to turn it off. Because click and collect was the new norm, but a lot of our customers are from the older generation who aren’t used to using these things.

‘‘We found our phone was ringing a lot more and we had to turn [Regulr] off because it wasn’t integrating very well.’’

Best Cafe would keep the Regulr app on standby for quieter times.

‘‘You can switch it on and off if you choose, which is really nice. You can turn it on in times where you might be traditionally quite quiet.

‘‘When you’re busy at 5 o’clock on a Friday night, we turn it off, because it’s more of an annoying tap on your shoulder — you’ve got to cater to this extra thing ... when you don’t need it.’’

She expected a lot of other cafes and restaurants use Regulr in a similar way.

On Stuart St The Corner Store Cafe owner Mark Anson said orders via the Regulr app had dropped with the alert levels.

‘‘We had heaps of usage at the start during Level 3 but we’re just finding people are going back to their usual habits now.

‘‘I think there’ll be a small percentage of people that continue to use ... the majority of people will go back to face-to-face ordering.’’

He appreciated having it in Alert Level 3 as it ‘‘was the only way we could operate’’.

The Regulr app service came free by signing up and using the posBoss point-of-sale system.

The Perc Cafe was one of the first to use the app. There are about a dozen Dunedin stores on it.

Ms Marks said at the beginning of Alert Level 3 the system crashed and would take customers’ money twice.

It was clear to her that customers wanted to come in and make their order now the country had moved to Alert Level 1.

‘‘I’ve just left the cafe and we’re packed in there right now,’’ she said yesterday. ‘‘People are loving it.’’

She said the Regulr app worked well for her businesses during Alert Level 3, but since then it had dropped off.

It had gone from making up almost all of their orders to making up just 1% or 2% of their total orders.