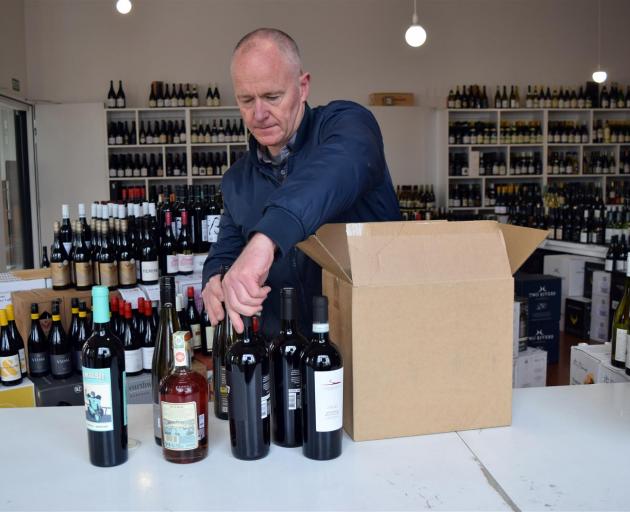 Wine Freedom co-owner Paul Williams packs a box of wine in his shop in Dunedin's Warehouse Precinct. PHOTO: SHAWN MCAVINUE
They heard it through the grapevine – a Dunedin shop’s freedom to sell its wine.

Wine Freedom co-owner Paul Williams said when the nation entered lockdown, there was confusion if his shop on the corner of Water and Vogel Sts was an essential service.

During the confusion, he applied for the wage subsidy for himself and three other staff.

About 10 days into lockdown, the Government allowed him to trade, if he could do it without physically contacting customers.

Each morning he would go to the shop alone to box orders customers had made overnight.

The orders would be packed until a courier arrived in the afternoon for their only pick-up.

Word of his shop being open for business in Level 4 spread quickly as customers told neighbours of their purchase, he said.

“In one street, I got six or seven customers just by word of mouth.”

In Level 4, he only took orders from Dunedin residents because freight charges to customers outside the city were “terrifying” and orders took too long to arrive.

The restart of sales spurred a decision to return all the wage subsidy to the Government.

He was confident for the future of his business because he believed his loyal customer base would continue their support.

The business opened in Dunedin in 2012 and was “nimble” and could adapt if necessary.

The closure of the borders would not impact his customer base as tourists were not his target market.

He had no intention of moving the business online because his shop in the National Mortgage & Agency building was a “destination”for customers and gave it a ” point-of-difference”.

“This is a unique space that no other wine shop in New Zealand has.”

Over the next few months, he was not expecting to break any of his sale records, but he was “very happy” to be able to trade through all the alert levels.

“We were so lucky and I’ll never forget how lucky we were in that period because we had an income coming in.”