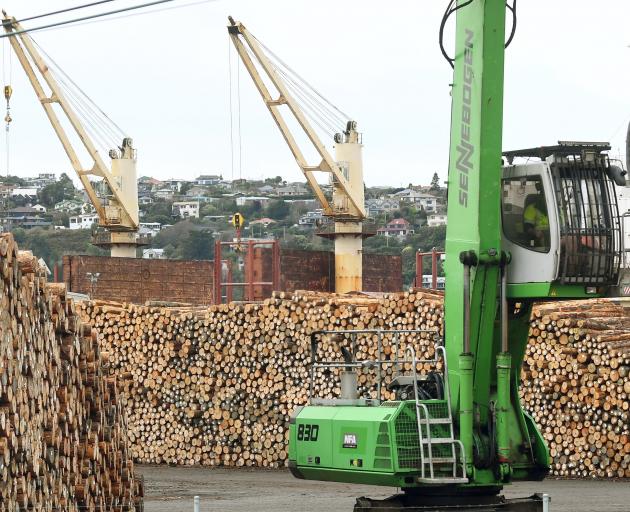 Logs are stacked in the yard at the same time as being loaded on to bulk carrier Blue Everton (rear) at Port Otago. PHOTO: STEPHEN JAQUIERY
About 70,000 tonnes of logs are sitting on Port Otago’s two log wharves because of strong demand and disrupted shipping.

Covid-19 has caused massive disruptions to global shipping, leading to delays in vessel arrivals at port.

Yesterday, ship Blue Everton was loaded at Leith Wharf and later at Port Chalmers while La Landriais was scheduled to arrive today.

Port Otago commercial manager Craig Usher said there had been a solid flow of logs to the port over the past 12 months.

‘‘Vessel demand for bulk ships is strong, very similar to the container industry and there has been a few delays,’’ Mr Usher said.

Volumes of logs were consistent, which meant any shipping delays put ‘‘a bit of a squeeze’’ on storage facilities.

Every fortnight, both Port Chalmers and Leith Wharf ‘‘roughly’’ had one vessel clearing about 20,000 tonnes of logs, he said.

Mr Usher estimated logs were waiting at the port for about two weeks before being loaded.

The first half of 2021 had had strong demand from China and South Korea which caused a dramatic increase in log prices and shipping costs.

In New Zealand, harvest activity had increased, which meant that there was much volume heading offshore, Mr Dodson said.

A reduction in log prices was expected in August after ‘‘overheated’’ prices in June and July, he said.

Demand would also decrease as China, one of New Zealand’s biggest buyers of logs, entered a lower point in its construction season.