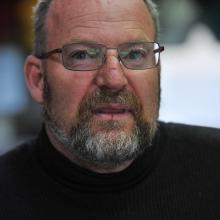 Allan Court
A Dunedin golf professional has been linked to an investigation into connections between three New Zealand companies and a convicted British fraudster.

Interest.co.nz reported the Ministry of Business, Innovationand Employment’s (MBIE) integrity and enforcement team was looking into the connection between three companies, all with the name Vivier, and British fraudster Ian Andrews, who is also known as Ian Leaf and was convicted and sentenced to 12 years in jail in 2008 for defrauding the UK’s Inland Revenue out of £55million.

Last year, interest.co.nz reported on Vivier-related emails to and from Mr Andrews with instructions and requests.

Chisholm Links golf club coach Allan Court is listed as one of the directors and the sole shareholder of Vivier and Company, Vivier Capital and Vivier Investments.

The address for the three companies is 16 Tahuna Rd at Lawyers Head in Dunedin — the same address as the Chisholm Links golf course.

An MBIE spokesman said its integrity and enforcement team (IET) had been made aware of links between Vivier and Ian Leaf.

"This information is currently being reviewed in accordance with IET’s enforcement policy.

"IET’s review of information regarding links between the Vivier companies and Ian Leaf remains ongoing."

Mr Court told interest.co.nz 16 Tahuna Rd was his business address. He had had no contact from Mr Andrews or MBIE.

He at first said he was not the beneficial owner of the companies but in a later email said he was.

When spoken to by the Otago Daily Times, Mr Court said he was not aware of the details in the interest.co.nz story.

He described connections between Vivier and Mr Andrews as having been "made up".

Mr Court said he would prefer not to say any more and let the MBIE investigation continue.

Asked if he speaks to Ian Andrews, he said, "No."

MBIE said the Registrar of Companies — which maintains the New Zealand companies register — had reason to believe the three Vivier companies might have provided "incorrect information in relation to documents required for the purposes of the Companies Act".

The registrar was trying to get further information from Vivier but the companies "failed to respond to requirements".

The registrar had initiated a process to remove the companies from the register. — Additional reporting interest.co.nz