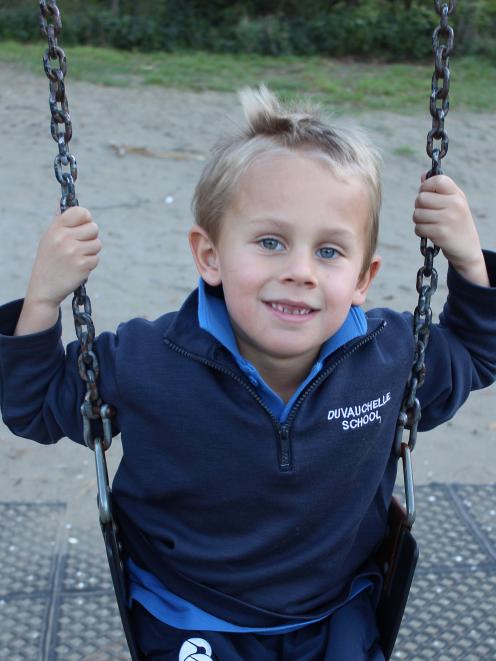 Sam Uren (5) from Duvauchelle School models a merino jersey that is part of his school uniform. Photo by Tori Uren
With a passion for New Zealand wool, it was only natural that Banks Peninsula farmers Carl and Tori Uren dressed their four young children in merino clothing.

But when their eldest daughter Annabel turned 5, they were disappointed to find the only jersey option for the school uniform was made from polar fleece.

Believing there had to be another option, the sheep and beef farmers made some inquiries and were disappointed to find merino jerseys were not available.

Spurred into action, the couple contacted some Canterbury schools to gauge interest. Heartened by the response, they approached a merino clothing company and asked it to back them.

When the company declined, they decided to have a go on their own, developing a design, name and logo and promoting a 100% merino jersey to South Island schools, through the Merino Wool for School initiative.

The jerseys were trialled at their local Duvauchelle School to get feedback. They also enlisted the help of friends to get their children wearing and promoting the jerseys.

Two years on, about 15 South Island schools listed the jersey as a uniform option, including Twizel Area School and Lake Tekapo School, in the Mackenzie district.

The jerseys were produced in school colours and embroidered with the school's name. As well as being warm and hardy, they were also machine washable.

''We're farmers; we know all the attributes of wool - it's a far better product than a plastic polar fleece,'' Mr Uren said.

The couple, both from farming backgrounds, spent several years on their OE before returning to New Zealand and managing several farms for Irishman Eamon Cleary.

He then leased them a farm and, after a few years, they bought their 220ha Banks Peninsula property.

Since then, they have leased further property and now farm 12,000 stock units, predominantly beef, sheep and dairy support.

Until now, Merino Wool for School had been a family affair with Mr and Mrs Uren developing the name; Mr Uren's sister, who is a graphic designer, developing the logo; and Mrs Uren's mother helping them understand the garment-making process.

But with growing demand, the couple wanted to develop the business, leading to discussions with PGG Wrightson Wool.

The company introduced Mr and Mrs Uren to fabric suppliers in the United States and was also providing the wool via contract from merino growers and assisting with marketing. The jerseys were manufactured in Christchurch.

PGG Wrightson Wool business development manager Craig Smith said it was a great opportunity to get involved in the community, supporting not only New Zealand and a wool product but also growers.

''It's a complete full circle with the added bonus of children becoming aware of the benefits of wearing wool,'' he said.

While it had a ''real battle'' to get the initiative going, it had been an interesting process and a big learning curve, he said.

The jerseys also needed to be affordable ''for average mums and dads''.

The couple were particularly keen to get buy-in from schools in some of the colder parts of the country, including Otago.

''If we can get half the kids in New Zealand wearing merino jerseys, it's great for the wool industry. There's a bit of win in it for everybody,'' Mr Uren said.

Once the brand gained some traction and became better known, they were keen to align themselves with farmers to provide wool for the project.

An Australian woman had also contacted Mr and Mrs Uren, keen to launch the venture across the Tasman.