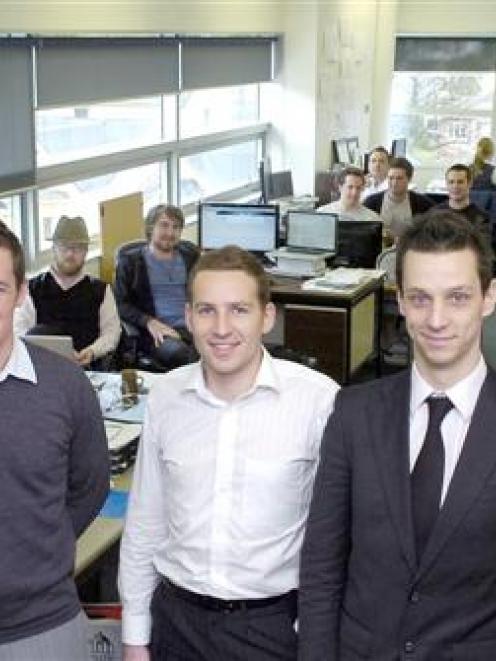 The Distiller co-founders (from left) Jason Leong, Tim Calder, Pierre-Emmanuel Perruchot de La Bussiere and Francois Bondiguel. Absent, James Wigglesworth. The Lab residents look on. Photo by Jane Dawber.
For years, Dunedin has been grappling with ways to keep its best and brightest residents in the city. As parents have watched their children leave, many not to return, much handwringing by civic and community leaders has taken place.

Business editor Dene Mackenzie talks to a group of young entrepreneurs prepared to do something about it, at their own cost.

Sometimes the best ideas do come over a drink in a bar. For five young Dunedin entrepreneurs, a couple of drinks one night has set off a chain of events they hope will change the way people think about business.

Jason Leong, Francois Bondiguel and James Wigglesworth (all of Pocketsmith), Pierre-Emmanuel Perruchot de La Bussiere (iVisit) and Tim Calder (ParkHawk) are busy building their own businesses and careers but spend many hours each week encouraging a new generation to succeed.

It provides entrepreneurs with advice and guidance around options for launching their ventures on minimal resources.

The men beg and borrow whatever they can to help fund The Distiller. They guest lecture at the University of Otago to raise money, they receive strong support from the university and they all praise the support of Centre For Innovation manager Steve Bodmer for giving them space for The Lab, in which the budding entrepreneurs can develop their businesses.

On top of that, Stuart Fleming, of wireless internet provider WIC, had been generous in his support, providing 20 terabytes of data at no cost.

Mr Leong was nominated as group spokesman for the interview with the Otago Daily Times but the conversation was punctuated by quips and details from the other men.

Mr Leong said their ambition was to change how people did business.

"We offer different principles. Companies are looked upon as evil. Big companies have the same legal rights as people, but what sort of person would a company be? It would be regarded as a sociopath who rolls over everyone in its way in the quest for profits.

"We think of ourselves as bringing up a great company, having a great childhood and providing an element of trust."

The only way forward was to lead by example and that was what the five had decided to do.

When they looked around at examples of corporate charity they could not help but notice companies such as Microsoft and ones associated with Warren Buffet. Mr Leong said that often, $1 billion companies waited until they had reached their peak before giving money away for charity or to help start-ups.

After a quick meeting over a drink, the men decided they would rather help now and encourage a new generation of entrepreneurs to do the same when their businesses succeeded.

Pocketsmith started out by making its online services free to subscribers in the belief that people would eventually start paying for something that was of good value.

The same principles now applied to The Distiller.

"The companies that have grown in Dunedin had to do it without the support of peers. As they have become older, there has been no reason for them to reach out and help others. In five years, these companies in The Distiller will have great hearts."

It was hard to develop a cluster or an incubator without co-operation, Mr Leong said. Throwing money at them had no guarantee of success if the people running the businesses could not see incentives to work together.

The Distiller saw itself as a natural conduit to get businesses to see the benefits of working together.

Mr Calder said the example of working together was there for everyone to see. The Distiller, and the businesses within it, had achieved much in two years by working together.

Regular meetings gave people the opportunity to talk about their businesses and any problems. Often, someone working in a different field could see a solution.

While many of the entrepreneurs were starting web-based businesses, there were a wide variety of businesses within The Distiller. They included technology businesses, musicians and designers.

Mr Perruchot de la Bussiere said the five co-founders of The Distiller all had experience of doing things for themselves but had shown that by working together, their own businesses could grow.

A lot of bluff and bluster had been involved in finding premises at the Centre For Innovation, Mr Leong said.

The Distiller was looking for an office and went to Mr Bodmer with a general idea about providing space for start-up companies during a university holiday break.

"He provided us with a suite and said 'don't tell anyone'. We haven't left."

Seed funding was provided by the Tindall Foundation.

The people using The Lab were given "hot desks" to work from and had very low overheads. Once a business was in a positive financial situation, it moved across the corridor to another suite and paid for the space.

"It's been a remarkable move on behalf of the university. They have given us the room to expand. Because of that leap of faith, we have worked hard to succeed."

What has The Distiller achieved in the two years of its operation?It had brought people to Dunedin because of the existing cluster at the Centre For Innovation, and it had kept Otago graduates in the city.

Mr Leong said that was what they had all planned and hoped when they first met in the bar and now it had happened.

Not only had The Distiller retained Otago graduates in the city but it had attracted talented people from outside the region to relocate to Dunedin.

As part of their "social contract" with the city, The Distiller were teaching businesses how to best use social media.

It was all part of the "giving until it hurts" philosophy adopted by the men, Mr Leong said.

The men also this year ran The Distiller Showcase, which boasted judges from Yahoo!, PricewaterhouseCoopers and the university MBA programme. Thirteen start-up businesses were given the chance to do a short presentation about their activities before the panel of judges. One of the start-ups has since moved into The Lab.

The Distiller had also held regular meetings in a bar close to the university which could be attended by anywhere between 40 and 80 people. There, people could talk about their ideas and get some inspiration from others.

"The Distiller is a network of extroverts. We are walking along the street, someone says hello and the next thing we are bonding with people," he said.

"The key is lowering the barriers so entrepreneurs can begin their businesses. Some get discouraged or don't fit the mould. Others thrive in the environment. Most businesses here are very young."

It has cost The Distiller co-founders about $5000 over two years to keep things operating but the time is approaching when they need some external funding.

Mr Calder said the group had helped many businesses but there was only so much the five of them could do while trying to build their own businesses.

The men were looking at options such as trying to become a registered charity (although they were told that was unlikely) as well as talking to some technology companies.

One of the problems was that the people who controlled entrepreneurial growth were often not entrepreneurs themselves, he said.

Mr Bondiguel said there were television shows and magazines talking about start-up businesses.

"A lot of people think it is too hard. If they are young, and haven't worked, then at least here they can meet, have coffee and share the experience. They understand it is not so hard. The only thing to do is to sit and work."

That did not mean people did not make mistakes, but failure was less likely in a safe environment like The Distiller.

In the two years of operation, there had been no insolvency of any company.

One of the recent arrivals was worried his idea was "stupid". Now, he had won a prize for that same idea, Mr Bondiguel said.

"Two years on, we have 20 companies doing fantastic stuff."

"We don't have boundaries and we are not gate keepers. We open the doors and lower the barriers to entrepreneurship.

"This is our legacy. We may move on but we hope this will keep growing. When you have peers looking out for you, it is not easy to fail."