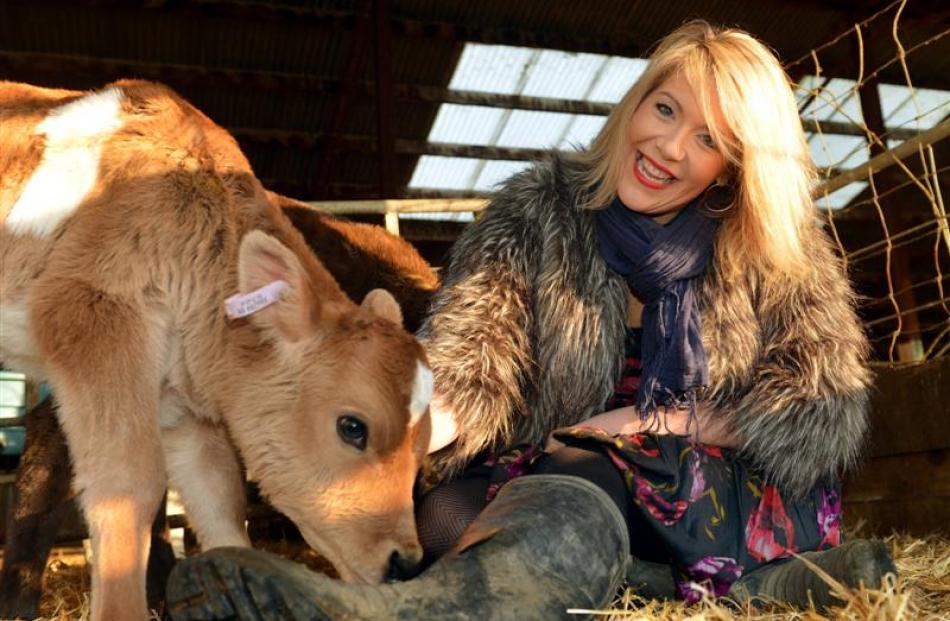 Chanelle Purser is possibly the most stylish calf rearer in Crookston.

Her fur jacket might usually remain in the wardrobe while she is in the calf shed, but brightly painted fingers dispense milk to hungry charges.

Mrs Purser (42) is somewhat of a dynamo, farming with her husband Phil in West Otago and running a successful retail business in Gore, but she takes it all in her well-manicured stride.

The vivacious businesswoman and mother-of-three recently took part in the Institute of Directors' ''rural governance essential'' course in Invercargill.

The course was designed to give insight into the benefits a board could bring and the fundamental responsibilities of a board and its directors, with the aim of supporting rural businesses in achieving good governance.

For Mrs Purser, it was to prove an illuminating exercise and one that changed her previous perception that being involved in governance required being well educated.

''I don't actually have a formal education per se. I was a child that left school early . . . but turned out OK.

''You don't necessarily have to be an accountant or lawyer or a retired bank manager. This day and age, all dairy farmers may not necessarily have all the credentials on paper but, up top, they are very, very smart cookies,'' she said.

Mrs Purser, who relished being in the same room as ''a whole lot of like-minded people'' and the subsequent discussion and networking opportunities, also realised the importance of having a real mix of people on boards.

Although her father was a dairy farmer, Mrs Purser was brought up in the Taranaki town of Hawera so she had a rural background ''but not really''.

After leaving school, she trained as a hairdresser and married Phil, who was a fitter-welder. While he did not come from a farming background, he had worked for a business that was fitting out dairy sheds with milking machines.

He thought dairy farming life might be for them, so the young couple rented out the house they had bought together and Mr Purser got a job as a farm manager.

Mrs Purser did some calf rearing and relief milking, while the couple's three children - now 20, 18 and 15 - also arrived.

The house was sold after they made the decision to go sharemilking, with the deposit used to buy their first herd of cows.

They later bought their first farm in Taranaki before deciding to move south to discover first-hand ''the land of milk and honey'' that everyone was talking about, she recalled.

When Mrs Purser's parents bought a farm, they sharemilked for them, near Waikaka, and have now been on their own farm at Crookston for about eight years.

Despite being busy with farming and raising a young family, Mrs Purser opened Carvin Streetwear in Gore 10 years ago, turning a gutted former butcher shop into a clothing boutique.

Much as she loved helping her husband achieve his dream of owning their own dairy farm, she found she missed contact with people ''immensely''.

Although a hairdresser by trade, she felt Gore already had enough hair salons - ''it's probably the highest salon per capita in New Zealand'' - so she looked into what she felt was missing in the town.

The business prided itself on providing a great shopping experience and Mrs Purser was excited about the recognition, saying she would be ''living her dream'' if it was to win.

Time management was the key to juggling a busy lifestyle and she had ''fabulous'' children and a great husband. Now the children had their driver's licences, life was a lot easier, she laughed.

Now calving was under way on the farm, Mrs Purser was likely to be away from the store for about four weeks, as she concentrated on feeding calves.

Usually, she was there at least an hour a day and she was very fortunate to have a ''brilliant'' manager and staff.

Mrs Purser made the time to do the rural governance course as she was looking forward to the next phase of her life.

Now her children were older, she was keen to become more involved in the community, and possibly on some boards, and give something back to an area that she and her family loved.

It was a great initiative to recognise that farmers had ''big businesses'' as she believed that was sometimes a little forgotten.

Farmers were making expensive and important decisions on a daily basis and were running multimillion-dollar businesses, so governance was very important, particularly given during the current challenging times in the dairy industry.

For those who made good decisions when times were tough, then it would not be so difficult to ''claw our way back when things get better''.

Mrs Purser was positive the dairy situation would come right, saying she totally believed in both the industry and Fonterra and its strategy.

''There's a lot of grumpy buggers about. They [Fonterra] can't help the way world commodity prices are. We've got to look forward and get on with what we can, not sit around and moan and groan,'' she said.

On the Purser farm this season, they were focused on keeping costs down but production up.

Describing herself as very goal oriented, she was always keen to try things, even if they did not always succeed.

With the store, the intention for the future was to keeping being ''the best at what we do''.