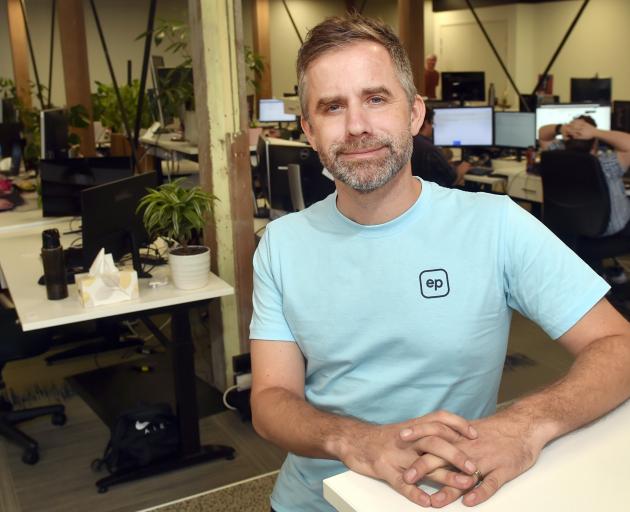 What has not changed is EP’s core focus, which is reflected in its straighforward directive: "humanising technology for lifelong learning".

Chief executive Alex Burke, who marks his first six months in the role this month, says the company’s new brand and global attitude has been the syllabus for its success.

At last count — and according to Deloitte Fast50 calculations — the company has been going along at breakneck speed the past three years, recording a remarkable 90% revenue growth path from 2016 to 2018 to around the $21 million level.

That performance earned it the title of Otago’s fastest growing tech business, putting it in the running for the Deloitte Technology Fast500 Asia-Pacific.

It was also named as a finalist in the best medium-sized business category of the New Zealand international business awards this year.

The growth spurt coincided with the co-investment of the Australian fund manager Five V Capital and Malaysian group Mulpha Credit into the company two years ago.

The two equity investors bought a majority stake from founders Craig and Shane Smith, the former University of Otago students who launched the concept 12 years ago as a vocabulary tool to help students come to grips with modern language learning.

It did not take long for the brothers to work out there were applications across a range of subjects, and EP has now evolved into a full online service provider for schools and teachers in science, maths, science, English and languages.

Mr Burke said by next year the full "suite" would expand to include humanities, economics, civics and citizenship and even health and physical education.

"There are other EdTech contenders who are good in one or more offerings, but it remains quite a fragmented space.

"One of EPs advantages is our ability to sell a full subject solution, backed up by support and analytics."

To support that solution-based approach, the EP business has expanded to a total of 150 employees through its Christchurch, Auckland, Sydney, Perth, Singapore and Indonesian offices, although the flagship remains in Dunedin, now in new 1500sq m offices housing 100 staff.

"One of the biggest challenges to the education sector is balancing teacher time, so our products are aimed at helping teachers be more efficient and part of that means being responsive to their requirements."

"Teachers also like that the offering can be customised to suit their requirements, no matter which area they’re in," Mr Burke said.

The numbers speak volumes. More than one million students in more than 1700 schools in 20 countries are regularly logging into EP’s learning platforms.

While most users are in Australia and New Zealand, EP learning modules are rapidly being picked up in Asia, notably in China, Mr Burke said.

"Admittedly some of the schools we’re in are by default, as teachers take EP with them when they relocate, so a lot of our growth is actually linked to teacher relationships," Mr Burke said.

While it does get the EP brand ‘‘in the door’’ across a range of geographies, the company is banking on expansion into the Asian market.

Mr Burke said while it was early days, the company had established a foothold in around 50 schools in the region.

"Southeast Asia alone represents around 1300 schools, so the potential is vast."

With Asia as a cornerstone of EP’s growth aspirations, Mr Burke (44) runs the company from EP’s Singapore offices, travelling to Dunedin and Sydney offices on a monthly basis. However, he does not have a desk at either location, given the mobile nature of this role.

Mr Burke joined EP in May, after five years heading up Tigerspike, a Singapore-based app developer.

Last year he helped orchestrate the sale of the company to Synnex Corporation subsidiary Concentrix, for a rumoured $NZ90 million.

After helping bed down the acquisition, he started looking around for new opportunities in the tech space.

"The plan was to look at tech companies in a growth phase. KYC [Know Your Customer] and EdTech were the leading contenders — both have huge growth potential — but I thought Education Perfect was a great fit. I knew the investors and I liked the story.

"EP is a wel-loved product and is in single digits in terms of churn, so the fundamentals of a great brand were already in place."

There was also a strong link to the South — his wife Sophie grew up in Invercargill and his parents-in-law still live in Central Otago.

While the Burkes have enjoyed reacquainting themselves with family and with the region, a move to Australia — EP’s single most important market — is on the cards.

"We are in the early stages of trialling a product for business training, in this case with an Australian telco, and the early results are promising," he said.