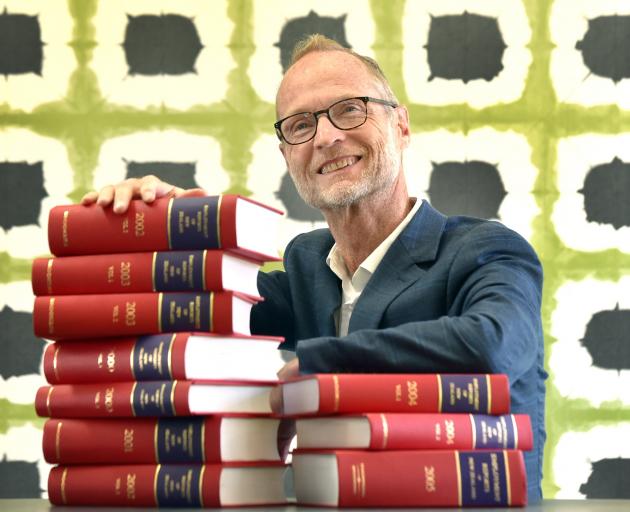 Certain life events prevented the United States-born Dunedin employment lawyer from getting his until later in life.

While at secondary school in his hometown of Charlottesville, Virginia, he got a part-time job working for a local criminal lawyer doing odd jobs, which turned into paralegal work.

Mr Browne planned to go to law school and return to work for the lawyer once he graduated.

That plan was "devastated" by the lawyer’s sudden death.

"I was a young man and suddenly did not want anything more to do with law, I was just devastated," he said.

Feeling lost, Mr Browne went to the University of Virginia to study English which led to his first job writing for a weekly newspaper.

His passion for photography secured him a job at a daily newspaper, Culpeper Star-Exponent, several years later, as chief photographer, a role he described as "very addicting".

"I’d live for that buzz the next morning seeing your photo on the front page after staying up late that night developing the negatives to make sure the photo got in the paper," he said.

After about three years, he resigned to become a freelance photographer and published a book about the James River batteau.

The shallow draft river crafts were used in the 1700s and 1800s to transport tobacco and other cargo along the James River. Construction workers unearthed remains of the boats in the 1990s.

Mr Browne’s book Batteaux comprised a series of photographs and won him a National Geographic photography credit and an award in the Benjamin Franklin book awards.

In 1997, Mr Browne moved to New Zealand and settled in Whanganui to teach photography at Whanganui High School.

"I was really happy there and I really did love it and I was happy to consider making a career out of it."

One summer holiday, he contemplated if he would ever regret not pursing law.

He spent a year at Victoria University in Wellington, commuting from Whanganui, but transferred to the University of Otago in Dunedin for his second year as he did not like the travel.

Being an older student, Mr Browne admitted he struggled to adjust to student life.

"The young guns would rock into class late with their skateboards and fall asleep while I was diligently trying to take notes."

He graduated in 2010 and struggled to find a job, which he believed was due to his age, despite applying for more than 100 positions and even taking out an ad in a prominent law magazine.

He decided to go back to university to get a teaching qualification and continued to drop his CV at law firms around Otago.

On his last day at teachers college, he received a phone call from lawyer Noel O’Malley at O’Malley and Co in Balclutha offering him a job.

"If it wasn’t for Noel, I seriously wouldn’t be sitting here doing this right now," he said.

After three years he moved to the Otago Southland Employers’ Association (now Business South) in 2014, despite having very little employment law experience.

After various promotions, he was eventually asked to apply to be the legal team manager in 2019.

In May, he was named the In-House Lawyers Association of New Zealand’s private sector in-house lawyer of the year at its annual conference in Wellington.

His colleagues nominated him for the award but he did not think he would get it — "I was up against lawyers from BNZ and Spark, there was no way I was going to get it" — and he even considered not travelling to Wellington.

It was then he knew returning to law had paid off.

Mr Browne believed employees were perceived as the underdog but what he had learnt in his role was that employers could be as well.

"I truly do believe that no employer wakes up in the morning and thinks ‘Right, who am I going to screw over today?’," he said.

Most of the employers Mr Browne worked with were small business owners and one of the best parts of his job was the relationships he got to build with them.

It was an incredibly interesting time to be working in employment law, as things were changing daily.

"This week alone we have been getting our heads around the Government’s new risk assessment framework for the vaccine and the traffic light system and what that all means," he said.

Mr Browne believed employment was a human relationship more than a financial one and Covid-19 had proved that.

"It is built on good faith, communication, trust and confidence and I think we’ve got so far away from that," he said.

With the pandemic placing more of an emphasis on the non-monetary value people got from work, it was important people were clear about and prioritised what they found meaningful in their jobs, he said.

In eight years, Mr Browne has settled all but one of his clients’ employment disputes.

"I’ve been to the [Employment Relations] Authority once and that was enough for me," he said.

He had the same amount of enthusiasm for law as he had had for being a chief photographer.

"I get the same sense of satisfaction from writing a good letter to a lawyer on the other side slapping down all their arguments than I do out of getting a good photo," he said.

Photography was still a big part of Mr Browne’s life and he got the opportunity to mix the two last year when he took a photo of Prime Minister Jacinda Ardern at an OSEA event.

The photo, titled Gaze, showed Ms Ardern laughing at a joke from the crowd and was on exhibition at the National Contemporary Art Award show at the Waikato Museum in Hamilton.

Having that mix meant Mr Browne was now living his "best life", and he had "absolutely no regrets" about finally getting into law.

Every step of the way he challenged himself to do better and backed himself.

Mr Browne encouraged anyone with a dream on hold to go for it.

"I would almost guarantee success," he said.