Losses on the Convention Centre and the Justice Precinct (above) accounted for about two-thirds of the $292 million loss recorded for B&I in 2017. Photo: supplied

Fletcher Building has taken a further $125 million provision against problematic construction contracts including the Convention Centre and the Justice Precinct in Christchurch and said its B&I unit would report a full-year loss of $160 million, including $35 million of overhead costs. 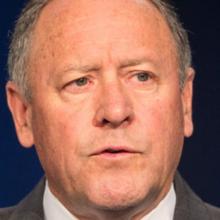 A trading halt was lifted on Fletcher's shares following the announcement which follows a review by KPMG.

Losses on the Convention Centre and the Justice Precinct accounted for about two-thirds of the $292 million loss recorded for B&I in 2017.

The shares fell 5.5% to $7.52 when trading opened on disappointment over the latest earnings downgrade. The stock has fallen 25% this year.

"There is acknowledgment that there is uncertainty with respect to large B+I projects that still have some time to complete," the company said in a statement today.

"In recognition of this, Fletcher Building intends to provide regular updates to shareholders on the performance of the B+I business and progress on the key projects.

"I want to offer my personal apology to our shareholders," chair Sir Ralph Norris said.

"Mistakes have been made and responsibility ultimately rests with the board. As we stated at our full year results briefings, we fully accept this responsibility."

Grant Williamson, a director at Hamilton Hindin Greene, said investors are "quietly losing confidence in the company given that they have had a number of write-downs regarding these projects. I think it will take quite a while for confidence to rebuild in the company."

He noted, however, that the stock is holding near support at $7.50 although the Australian reaction will be key as they are large holders of the stock: "If there's any selling (when Australia opens) it could see further downside."

Mr Williamson said news there is a new chief executive is a positive and may be one of the reasons the stock hasn't fallen further.

At both UGL and Tenex "he returned loss-making businesses to profitability, doubling the UGL share price in two years," Sir Ralph said.

After booking a series of one-time impairment charges Fletcher had said cash flow was set to improve in the 2018 financial year.

"In three out of the four projects reviewed, being Commercial Bay and the two projects in the Infrastructure business, KPMG's forecast outcome is broadly in line with management's expectations - risks and opportunities exist on each project, however, final margins in all three cases are expected to be positive," it said.

"The key issues identified relate to the NZICC project, which has already been identified as a major contributor to the Company's losses in FY17."

KPMG didn't include the Justice Precinct in the review because that contract is near completion, Fletcher said. It made the statements ahead of its annual meeting in Auckland this morning. The meeting may see criticism heaped on the board.

The NZ Shareholders' Association has been critical of the company's performance and communication with investors and plans to address issues including directors' fees at the meeting.

The NZSA surveyed its members for their views on Fletcher last month with almost 90% of the 250 members who participated wanting changes at board level including 8% who wanted the entire board dumped.

can of worms maybe