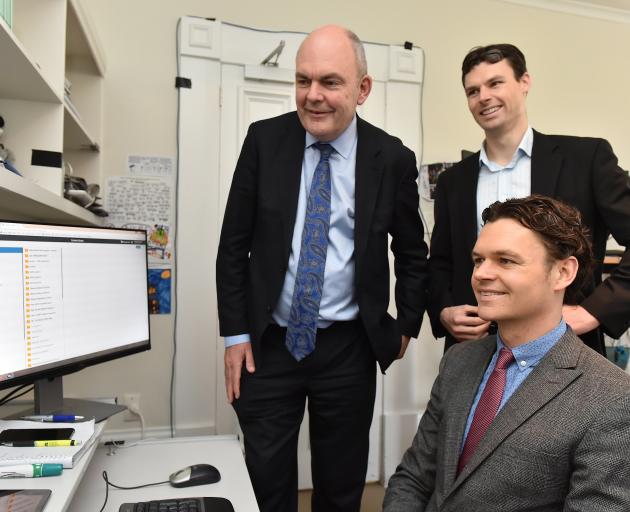 In 2016, then Minister of Science and Innovation Steven Joyce with Shane and Craig Smith (bottom right) of Education Perfect. PHOTO: GREGOR RICHARDSON
Education Perfect founders Craig and Shane Smith have come a long way since founding the company in 2007. In a recent ‘‘virtual fireside chat’’ with Findex managing partner Scott Mason the pair shared their journey. Jacob McSweeny listened in to one of Dunedin’s recent success stories.

Craig Smith remembers the times people said no to him more than those when they said yes.

"We were in Auckland; it was the first time I ever presented at a conference.

"Thirty French teachers in the room [and] five minutes into the talk, I’m saying ‘Language Perfect is going to be awesome for your students’.

"One of the really influential teachers stood up and said ‘Craig, just need to stop you there ... this is nonsense, no one’s ever going to use it, stop wasting your time and our time’ and he walked out of the room."

Despite the brutal rebuff that night, Education Perfect founders Craig Smith and his brother Shane Smith have always tried to take something out of rejection.

"All we can ever hope is that someone gives us their honest feedback," Craig said.

Another memorable rejection was in the company’s second year, when Craig got the chance to pitch its online learning platform to the Minister of Education.

"Got to the meeting, waited for an hour and then the minister came out, shook our hands ... said sorry we’ve got a press conference, can’t talk to you today. [They] disappeared and that was it."

Instead of being disappointed Craig realised he "had a chance to spend two days preparing an info-deck about the product".

"I really think that as long your mind is open and saying ‘what am I learning from the opportunity?’ I can’t really think of any instances where something didn’t go our way that it wasn’t really positive in the long run." 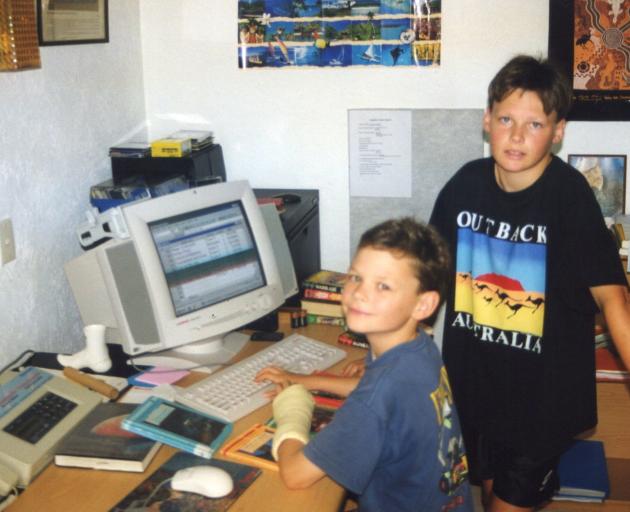 It supported an additional 500,000 students during Covid-19 restrictions — when many schools where shut and learning had to be carried out from home.

"Teachers were looking for solutions to enable a remote classroom to function effectively, and we have been able to be an important part of that for many schools," Craig said.

The company, founded in 2007, now employs 160 staff around the world, with headquarters in Dunedin.

It costs about $40 for one subject and about $100 for a full bundle. They cover languages as well as nine other curriculum subjects such as mathematics and English across multiple countries.

In the early days when Craig was about six months into his degree, his talent at being able to take feedback and make changes led to an early and surprising injection of funding.

He remembered being told by Findex managing director and StartUp Dunedin board member Scott Mason — who would become a key adviser and board member of Education Perfect — to keep an open mind to feedback.

It was this advice that perhaps led him to take a rather casual approach to his presentation to judges at the business ideas competition, Audacious.

Craig said he entered the competition looking for feedback on his very early stage idea, with no expectation of being competitive.

His presentation was a quick five-minute demonstration of his early product — a basic translation tool where students would fill in words when prompted.

He then sat down and asked the judges to tell him what they thought of it.

"I spent the next 35 minutes writing down ideas," he said.

"I’d called the business Crafty Kiwi Creations ... the judges looked at me like I was crazy. They said why don’t you just go with the product name ‘Language Perfect’."

Together with the judges they also decided an online subscription-based product would be better than the usual vehicle into the market at the time, CD-Roms.

It then came to judging night for the Audacious competition.

"I was curious to see who was going to win," Craig said.

To his great surprise, his idea was announced as the overall winner.

"We won $20,000 and it let us buy computers and the professional version of the product," Craig said.

"What the judges had said was that we were the only candidates to really listen. Everyone else was so determined to defend everything they had from the product to the name and I’d walked in and it was a different approach. That really has stuck with me, ever since."

The two brothers had an early interest in computer games, which led to their father trying to convince them to start making them.

"One day when I was about 10 our dad brought home a big thick book, which was a games programming kit and a little CD-Rom in the back cover," Shane said.

"We weren’t hardcore in any sense, our games were pretty crappy.

"It was something where we had a lot of fun. We build a very basic set of skills. When we went through high school ... we had a bit more time working with computers then."

They were at Saint Kentigern College in Auckland, which at the time was one of the first schools to have a one-for-one laptop programme.

The early edition of Language Perfect came from Craig making it as a small game for his Japanese French classes.

His Japanese teacher, Doug Anderson, based a lesson on one of Craig’s ideas.

"He said all right ... let’s take a few days and everyone can use PowerPoint or any platform they like to sort of do something about learning Japanese," Craig said.

"That gave me time and encouragement to build it out further."

The head of ICT at the school, Walter Chieng, was "another great mentor".

"I’d showed it to him and he also gave us that initial encouragement," Craig said.

"What’s easy to forget is when you’re 14 years old ... just someone saying ‘hey this is really cool, good stuff’. Giving you a little pat on the back and some encouragement; that means the world."

During the brothers’ university days Shane was not always on the scene — he ducked out to finish a medical degree and work as a doctor for a year.

"We were starting off with something that had been Craig’s initial brainchild and then I got involved," Shane said.

Shane continued to help. He would study and work towards his medical degree while also coding for Language Perfect — as it was then — in the evening.

Craig would go and see how students found the programme changes. Then he would go back to Shane who could make further changes based on that feedback.

"There was something really cool about those tight feedback loops," Shane said.

At the point Shane came back into the business after a year out working as a doctor, the business had branched out from being just a language learning platform.

"Craig had kicked off a new project to be building a general purpose learning platform across multiple subjects and potentially to be having a much larger impact on students’ learning in schools," Shane said.

"What was really appealing about that was the way one could put in a set of work and then have this immense scale.

"We’ve got over one million students each year at the moment who are using Education Perfect."

They were incredibly proud of the positive impact they could have on students’ learning, Shane said.

The dynamic between the two brothers led to a lot of their success.

Over time they would lean into a healthy tension made up of their differences, Shane being more conservative and detail-oriented and Craig focusing on the "big picture".

"I’m sort of shooting for the moon and saying this is going to be all around the world as a big business, Shane’s saying ‘how are we going to get the product out the next month?"’

"When we were getting going we found if people used the platform then there was really good uptake," Craig said.

"Just getting someone in the door was really hard because schools are busy places and they didn’t have time to look into new things."

They partnered with the New Zealand language teachers’ association to create the NZALT Vocabulary Olympics Language Perfect World Championships in 2008, which ultimately evolved into the LP World Champs in later years.

It went for 10 days and students answered as many questions as they could. They were then ranked on relative scoreboards in their class, school or nationwide.

It was a way of using a competition framework to make learning "a cool thing", Craig said.

That competition became so popular and competitive they had to put a time limit on some students.

"A maximum of 8 hours a day students were allowed to participate, for 10 days in a row.

"People were doing way more than that and it got to the point where they were getting really unhealthy.

"That’s when we knew we were on to something when you could take ... something that was otherwise a boring thing and turn it into something really powerful."

When asked about the importance of having a clear end goal, Craig described it as "everything".

"It was the thing that gave us total clarity on what it was that we were doing.

"It defines the scale of the business, it may influence whether or not you’re taking on investment. It will definitely influence your risk profile in terms of how fast you’re moving and just moving fast isn’t necessarily a good thing.

"If your team is scaling faster than you’re ready for you could risk internal collapse, which we almost did. If you’ve got a really clear goal you can work backwards from there."

That would help deciding how many products they needed, or if they needed to go into new markets, he said.

The two brothers were grateful to all of the teachers and the students — a lot of them in Dunedin — who helped them develop their products.

"There is absolutely nothing like standing in front of your customers and seeing their dismay, their frustration and eventually, hopefully, satisfaction as they interact with your product," Shane said.

"It’s daunting, it’s uncomfortable but by far and away it’s the best technique that we know to drive innovation and improvement.

The "virtual fireside chat" was orchestrated by Foundex, a programme sponsored by Findex to bring entrepreneurs, founders and investors together to share knowledge.