Peanut Butter king promotes ‘have a go’ at business message 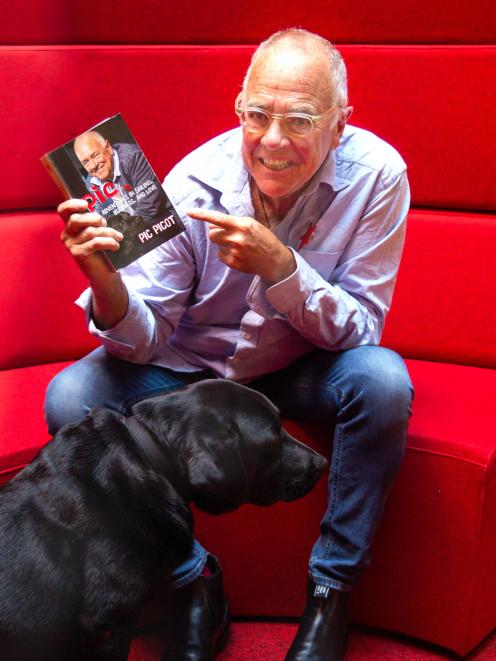 Pic Picot has launched a book which he hopes will inspire people to start their own businesses. PHOTO: SUPPLIED
"It's just being real."

That’s what Nelson peanut butter king Pic Picot credits his success in the food industry to, a business which has grown from a market stall to a factory employing 55 people, exporting the nutty spread around the world.

Mr Picot (68) - who can now add author to his CV - is in Dunedin this week, hosting a public event at the Dunedin Public Library tonight and a lunchbox seminar at the Otago Chamber of Commerce tomorrow.

He is on the road with both his new book Pic: Adventures in Sailing, Business and Love and his giant toaster caravan visiting various centres throughout the South Island.

The book also had a serious purpose; he hoped it would give readers the confidence to have a crack at starting a business of their own.

His own peanut butter journey began later in life. By the time he was 21, he had earned enough money from making leather goods to pay for his first OE. Back in New Zealand, he took to furniture-making, learning the trade from an English craftsman.

At 55, Mr Picot was running a small laundromat in Nelson but, with his eyesight failing because of macular degeneration - he is now legally blind - he had to close it.

He wanted to make $200 a week to keep afloat and his mind turned to peanut butter, which he had been making for himself. A peanut butter lover, he had become annoyed with the sugar content in the spread, so preferred making his own.

He spent $10,000 on a concrete mixer that he could put a burner underneath, and peanuts, and began producing from his garage. From the first day that he attended a market, he got his $200.

He did not particularly want to start another business - which was why he was doing a creative writing course at the time - but, over time, he realised it was "quite fun".

He bought a forklift, the market continued to grow and 12 years later, he opened his third factory, Pic’s Peanut Butter World, which was now a popular visitor attraction.

When it came to being real, Mr Picot said there were no secrets at Pic’s. People saw it being made and there was value in that.

"If I can get one person excited about it, which I can because it’s that good, and can know they are going to go off and tell their friends - and they do ... it’s all word of mouth."

And that person-to-person contact was far better "than paying $1 million to the fanciest salesperson in the world."

It also had to be a company that people wanted to give their money to and, being in a small centre like Nelson, meant there was "massive community support", he said.

Asked his advice for anyone contemplating starting a business, Mr Picot said they should "give it a go".

"People say, ‘I’m waiting for a good idea to come along’ but actually just get in there and do it ... and see where it ends up."

These days, the business employed a chief executive who took care of the likes of budgets, while Mr Picot said he got to travel around the country talking, "having photos taken and kissing babies".

"It’s a wonderful job. I have so much fun. Because it’s got my name on the jar, I can add real value to the company just by talking to people. There’s a place for me," he said.

Pic’s was working with Plant and Food and doing a peanut growing trial in Northland which Mr Picot was very excited about. At the moment, the business was "spending gazillions" importing nuts from all over the world.

If the trial was successful, then it would save that money going offshore and it would be spent in Northland.

The scariest thing was having his 92-year-old mother read it; she was also blind so his friend Mark Hadlow did an audio recording.

"She absolutely loved it, generally ... [she was] a bit shocked here and there," he laughed.