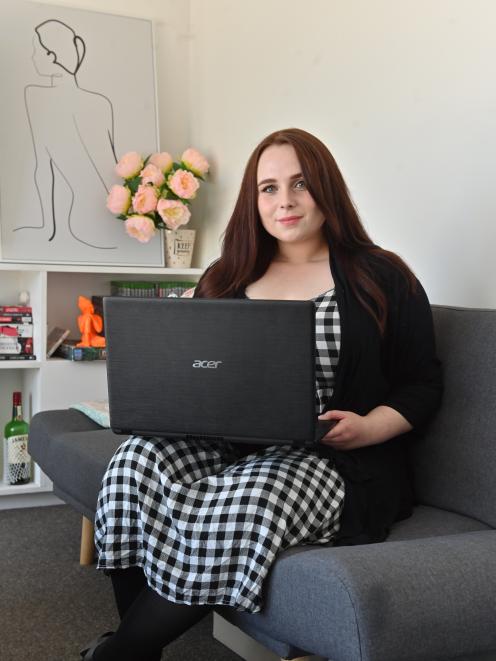 McKenzie Dowson runs her outsourced social media business from home and has built up three clients after starting late last year. PHOTO: GERARD O’BRIEN
Creative marketer McKenzie Dowson says when it comes to telling stories it is always best to focus on the person at the heart of the story.

"It’s kind of like how a dog sees another dog on the street and is like ‘Oh my god, it’s a dog’. People sort of do that with each other as well."

Ms Dowson moved to Dunedin at the start of September and within two weeks decided to try her hand at entrepreneurship, joining Start-up Dunedin’s Co.Starters programme, which helps people turn their ideas into functional businesses.

Ms Dowson quickly went from Dunedin newcomer to a star of the Co.Starters programme with her idea to start a business offering to manage companies’ social media profiles.

She became one of the successful participants with paying customers at the end of it.

"It all happened really quickly, suddenly the ball was rolling and I had to get out of its way," she said.

Ms Dowson has no tertiary qualification and follows a simple rule for the way she writes her marketing.

"It’s a lot more interesting to hear a story and a message from a human being than it is to hear it from a brand or just a nameless logo," she said.

"What we want is for people’s names, voices and stories to be out there.

She was hesitant about being self-employed but the attraction of being her own boss was what ultimately led her to do it.

"I have weird creative ideas sometimes. Stuff that I’m not sure would fit into a ‘brand voice’ all the time.

"This way I can market my own business doing weird stuff. I figured exercising creativity, I might have a bit more freedom this way."

She said the first customer was someone she knew from her time working at a law firm in Invercargill.

She has since picked up two more businesses and works about eight hours a week.

"You never know what’s around the corner. I’m very conscious of the fact a lot of start-ups fail.

"I am looking to the future and things are progressing very well," she said.

Her dream is to be able to eventually work from a co-working office in Dunedin, such as Petridish or Innov8HQ.