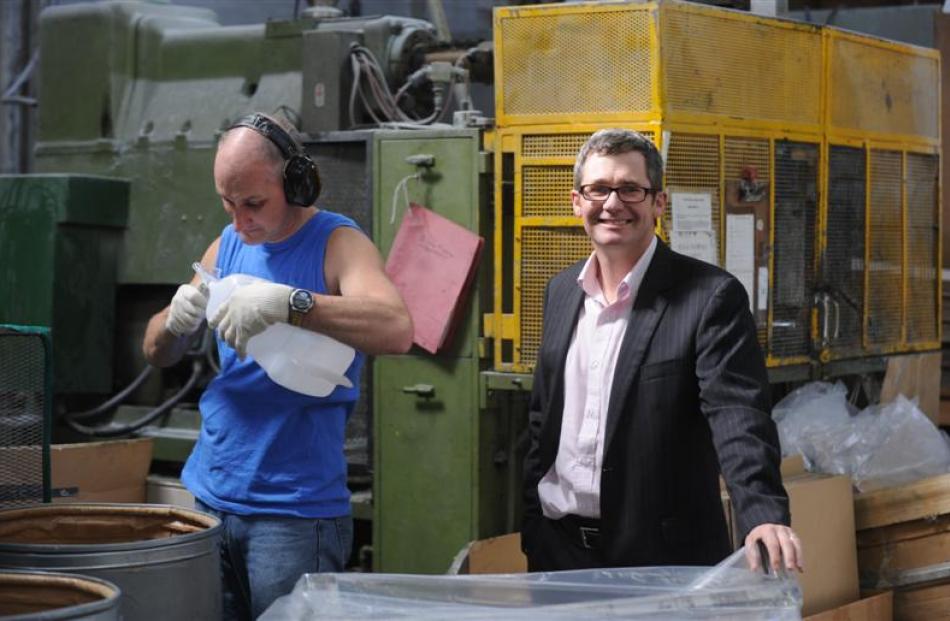 When Norman Wood saw an advertisement in the newspaper for a toy factory for sale eight years ago, he decided it was worth checking out.

After all, his father had a small woodworking factory and, as a child, he spent a lot of time in it. He thought he would quite like to own his own factory.

With a background in advertising, marketing and philosophy, along with a degree in planning, Mr Wood, originally from Auckland, bought EPI Plastics and became the third owner of the business, which was established in Dunedin in 1974.

Promotional products are also made at the Hope St factory.

There had been "tremendous" changes over the eight years, Mr Wood said. Staff numbers had gone from 12 to four, although turnover had increased.

A major boost to business came during the Christchurch earthquakes, when orders for plastic containers came flooding in.

The factory was temporarily ramped up to run 24 hours a day, seven days a week, to keep up with demand.

While the financial return was welcome - it allowed the company to pay off debt and also opened up new customers - there was also the altruism element and working "extra hard" because it was "our brothers and sisters up the road" who were affected by the tragedy, Mr Wood said.

That was another advantage of being a New Zealand supplier - the containers were needed immediately and it would take too long to source them from the likes of China.

Plastic suppliers and freight companies also worked hard to help. "That's what you lose if you lose local manufacturing," he said.

At that time, the company was going through about a shipping container-load of plastic a week, whereas that quantity would normally last about two months.

By August-September, things had settled down and business returned to normal.

He described the plastic, which was food-grade and made in Thailand, as being "like beans in a bean bag".

While the plastics industry was increasingly being monopolised by a few big players, his business was "pretty cost-effective".

He enjoyed working with small customers, saying he cared about his customers and their businesses.

About 95% of the company's products left Dunedin but only a very small amount was exported. That was a real opportunity in the future, however, and something he was exploring.

He believed growth for his business was in importing, exporting and product development. He was also looking at moving to more modern premises in the future and investing in new equipment.

Mr Wood believed Dunedin boxed above its weight in terms of its business skills, saying there were some "pretty grunty" businesses in the city. He was grateful to the various mentors who had helped him in business over the years.

Life was busy for Mr Wood, who also has a small advertising business, owns Hulmes Court Bed and Breakfast and co-owns a book-importing business, while he and wife Zina are expecting their first child in several weeks. The key to juggling so many balls in the air was having "great staff", he said.