Owners Kim and Matthew Morgan reluctantly hung up their utensils last week after they had watched their balance sheet get slashed by a drop in customers.

"We were popular by appearances, but not on paper," Mr Morgan said, noting the queues of loyal customers they had waiting for lunch in the final days.

"But because there weren’t enough people walking in the door popular doesn’t matter — you still have to pay your [bills]."

Over the year his wife, who holds a PhD in theatre, had been crunching the numbers for the popular Tex-Mex and southern comfort food outlet and they were not great reading.

"Even though we had queues out the door most days and did indeed have a very loyal following there were just enough fewer city centre workers who had changed schedules or were working from home or were making their own food that we noticed a marked drop in numbers on previous years," Dr Morgan said. 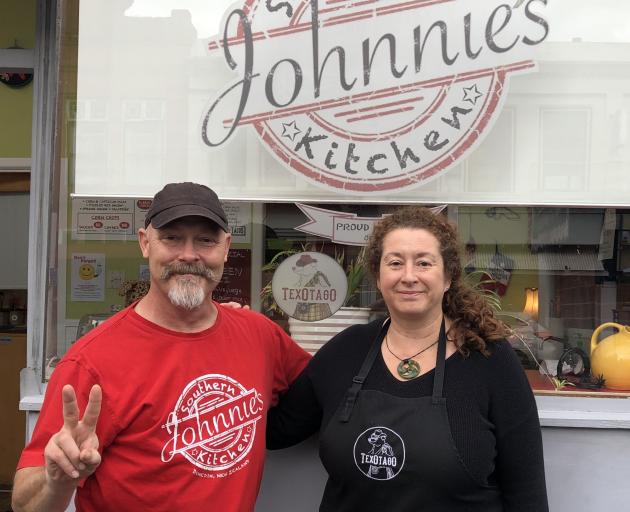 Matthew and Kim Morgan have been moved by the loyalty of their customers throughout their time running Johnnie's Southern Kitchen. PHOTO: SUPPLIED
Mr Morgan said their margins were already tight.

The couple — who are dual US and New Zealand citizens — had done a combined seven and a-half years operating their TexOtago food truck and Johnnie’s, fighting hard to stay on the right side of the tight margins fast food and small business owners are often dealing with.

But Dr Morgan said their margins had shifted just enough to lead them into debt.

"We had to make the decision to stop before we got in even further over our heads."

A restriction to supply chains also hurt their business.

One-third of their bean supply disappeared and they could no longer get their preferred tortillas because importing them became too expensive for their supplier. The overall cost of their supplies had gone up too.

They tried to run the store more efficiently by bringing on a new employee to run the shop while Dr Morgan stepped away for a bit, but it was clear they were still not going to make enough money.

Over the years they tried opening at different times but they said their part of town did not get the foot traffic they needed to make it worthwhile.

Mr Morgan said they did see great potential in the Rattray St-Princes St area, but that it would be too far in the future for them to hold on and take advantage of such changes.

"We nested there for as long as we could ... The time was right for us to not be doing it anymore. It wasn’t necessarily right for our hearts but it was necessary."

As they shut down they said their goodbyes to customers, many of whom had become close friends.

"We had such a group of people by name, what sauces they started out with and what they’re up to now," Mr Morgan said.

"We have been given the blessing by so many people of ‘I started out eating nothing but mild foods and you’ve got me all the way up to jalapenos’," Mr Morgan said.

It was hard saying goodbye to their customers, Dr Morgan said.

"We are truly honoured that we’ve, in such a short time, become beloved apparently in this community and we will miss that and we’ll miss the people — not the long hours, not the scraping to get by, but the amazing people we’ve met along the way."

Now Johnnie’s Southern Kitchen is no more, Dr Morgan will focus on her work as one of the co-founders of Dunedin Summer Shakespeare.

Mr Morgan is doing some theatre sound design work, but he intends to become a "mad scientist", inventor and handyman out of their Otago Peninsula garage.