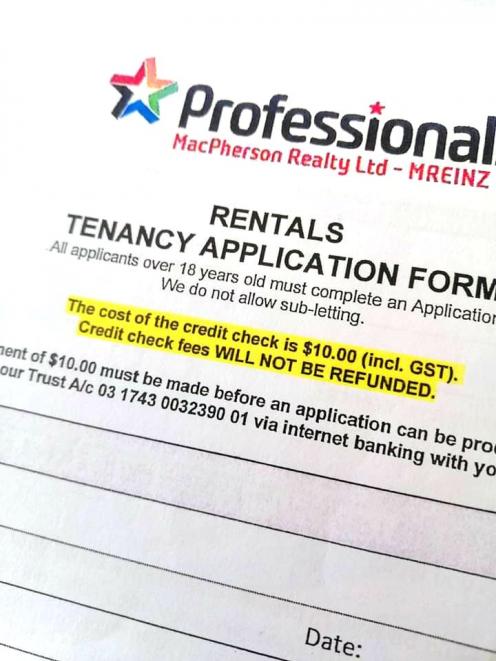 Professionals MacPherson Realty Ltd is no longer charging the fee after learning it was not allowed under the Residential Tenancy Act.

As of December 2018, charging letting fees was prohibited including "any fee charged by a letting agent to cover certain costs associated with letting a property", according to Ministry of Innovation and Employment housing and tenancy services manager Jennifer Sykes.

"This includes costs associated with vetting potential tenants," she said.

Companies that do charge a letting fee can be liable for up to $1000 for "exemplary damages".

Professionals MacPherson Realty Ltd general manager Steve Lindsay said the fee was a "historical policy" the company had had for a long time.

Mr Lindsay said it was a fee for prospective tenants and argued that it was not a letting fee.

But, when he was shown emails from the Ministry of Innovation and Employment explaining vetting costs were to be paid by the landlord, he said the company was "keen to put this right".

"We have since started the process of reviewing our records to identify who has been charged the $10 fee with the view to contacting those individuals and providing a refund," Mr Lindsay said.

He said being notified it was not allowed to charge the credit check fee led to a review of all of the company’s property management processes.

"We believe that we are now acting fully in accordance with the Act."

A person who did not want to be named but had been looking for a rental said he chose not to apply to Professionals in Invercargill because the company was "taking advantage of the housing crisis" with its credit check fee.

It behooves them to be abreast of Tenancy Law. 'Historical' don't cut it.
Up to date does.