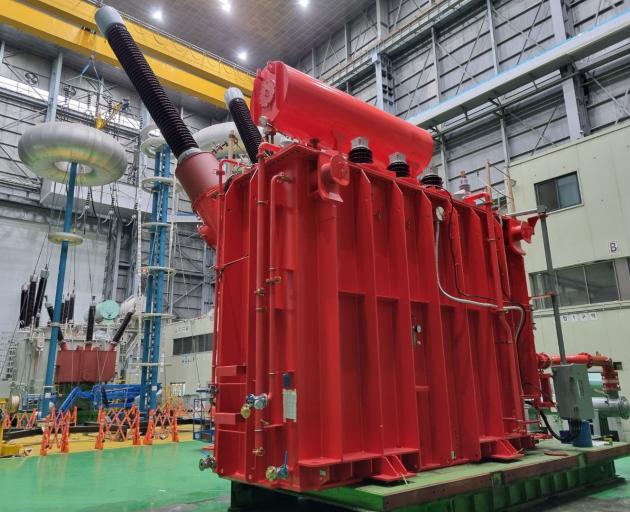 The new transformer in situ at its South Korean manufacturer. PHOTOS: CONTACT ENERGY
A new transformer is on its way to the Clyde Dam and will carry a proud message when it and other replacements are installed.

A programme to replace the four operating transformers and one spare inside New Zealand’s third-largest hydro-electric dam’s powerhouse has begun and when complete will represent the rainbow-coloured pride flag.

The first transformer, coloured bright red, is scheduled to arrive next month after a long process marred by Covid-19.

"As a Rainbow Tick accredited employer the team based at Clyde wanted to make a bold statement to that fact that we embrace diversity and thought this would be more impactful and enduring than a flag up a pole.

"So each of the transformers, of which there will be five, will be painted in an individual colour of the rainbow pride flag."

Consideration was still being given to how to capture the sixth colour of the flag, he said.

"The dam itself was considered but that’s a lot of paint."

The opportunity came after an inspection in December 2020 found the condition of the four transformers was poor and it was no longer safe to continue operating Unit 4.

The spare was also unusable.

Due to the safety risk, the Unit 4 transformer was shut down and had not operated since. 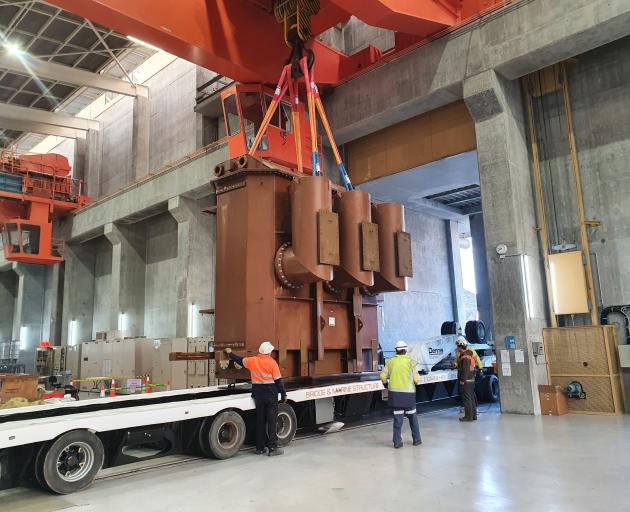 The transformer known at ‘‘Unit 4’’ is removed from the powerhouse at the Clyde Dam.
The other units were assessed as safe but would be replaced as a precaution over the next one to three years.

The need for replacement had been unexpected, Mr Pritchard said.

"There are some transformers at Roxburgh that are 60 years old.

"We expected the Clyde four to last around 40 years, so having to dispose of them 10 years earlier than expected was a surprise."

The original transformers had been constructed in New Zealand at the same time as the dam in the 1980s but the country no longer had that capability and that meant looking offshore.

The tender contract was awarded to Hyosung Heavy Industries in South Korea last June and design was completed in October, he said.

Manufacturing was made difficult due to borders being closed and companies in South Korea oversaw that on Contact’s behalf.

Testing had to be undertaken remotely via video conference.

"Typically we would have our engineers attend this in person."

Shipping had not been straightforward either.

Manufacturing and shipping delays had meant the arrival date, originally planned for March, would now be next month.

Normally the transformer would be shipped from South Korea’s Busan Port to Timaru then transported via truck.

The delays included hold-ups in port and lockdowns in China, and an outbreak of Covid-19 on the ship scheduled to pick the transformer had meant getting a new crew from Vietnam.

The original shipping booking was missed and with ship availability at a premium an alternate route via Auckland was arranged, Mr Pritchard said.

The transformer would be unloaded in Auckland, stored for about 10 days, loaded on to another ship to Timaru, then driven by heavy haulage truck via Lindis Pass to Clyde.

Snow and ice on the pass had the potential to cause further delays.

The transformers’ dimensions were 4m wide, 6.4m long and 4.65m high and they weighed 96tonnes, meaning it was a "fairly significant heavy load", Mr Pritchard said.

At the dam the trailer would be pushed into the powerhouse and the transformer would be unloaded using the gantry crane.

Farra Engineering in Dunedin had designed and fabricated a lifting beam to allow it to be safely lifted.

Once unloaded, it would be reassembled, together with additional components shipped separately, filled with about 36,000litres of fresh oil and installed over eight weeks.

Housed in the Clyde Dam powerhouse, the four operating transformers are critical pieces of equipment that take the electrical energy output of each generator and  transform it from the 15,000V the generator operates at to the 220,000V it needs to be to be transported on the national grid as efficiently as possible to customers all over New Zealand.