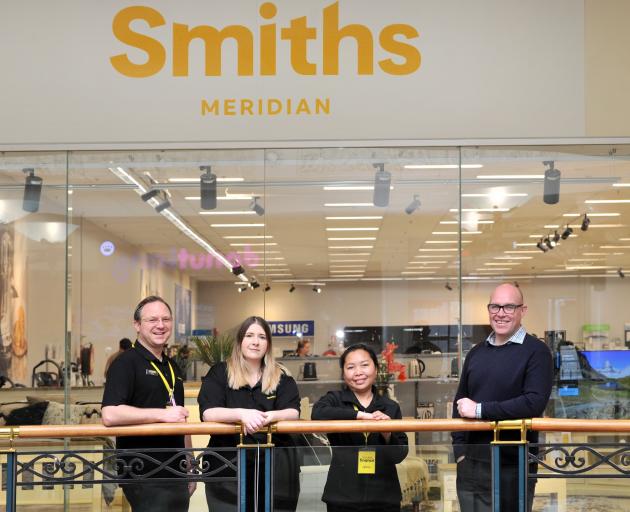 The store officially opened on Thursday afternoon in the Dunedin CBD after the company committed to taking over the old Kmart location last month.

Smiths City chief executive Tony Allison said he hoped the move into the city centre would drive a rethink as to what the company offered.

"We’re just excited to be here," he said.

"It is a bit of a shot in the arm for Smiths. Hopefully ... it has reset the thinking process about who we are and what we do by moving into the central [business district] and exposing ourselves a bit more."

It was the first time Smiths City had taken up residence in a mall (it had planned a new Christchurch store to be in a mall there but it was not yet open) and Mr Allison was already seeing a different type of clientele in the first day of operation yesterday.

"Being in the heart of the city ... I think that gives us a chance to connect differently."

He said it would open the business up to people who may not have driven out to its previous site, a "destination centre" in South Dunedin.

"I think it’s going to broaden the range of our sales base.

"I don’t think people realise the brands we’ve got and the range we’ve got. This gives us the opportunity to expose a lot more to Dunedinites."

It was a bigger space than the store’s previous home in Andersons Bay Rd, which has recently been approved as an option for a Kmart to take up for four years.

"For example we’ve got room for clearance — so we’ve got a bit of a clearance display going on."

The move between stores took about two weeks.

Asked about the seismic strengthening needed at the Meridian Mall and why Smiths City would take residence there when Kmart would not, Mr Allison said his company was not the only one happy to stay.

"Just look around who else is here. Sure there’s one that’s not, but how many are?

The retail business had levelled out following a "sugar rush" after the Covid-19 lockdown.

"A bunch of people were sitting around going ‘actually now I’ve sat on this couch for a couple of months it’s not that comfy’, my bed’s not that good or my TV is not what I want.

"People are still thinking ‘I need to save and think about the future’ but equally they’re not spending the same on other products. I think retail’s getting a bit of a kick out of that."

The next few months until the new year would be vital for retail, and Mr Allison was hopeful there would be no further Covid-19 interruptions.

The company was looking towards several landmark sales days — Labour Day, Cyber Monday and Black Friday and then Christmas and Boxing Day.

"We just don’t need the Covid interruption in that period, that wouldn’t be good."

There were about 12 full-time equivalent staff at the Smiths City store in Dunedin, and if things went well, they would consider bringing in one or two more staff.