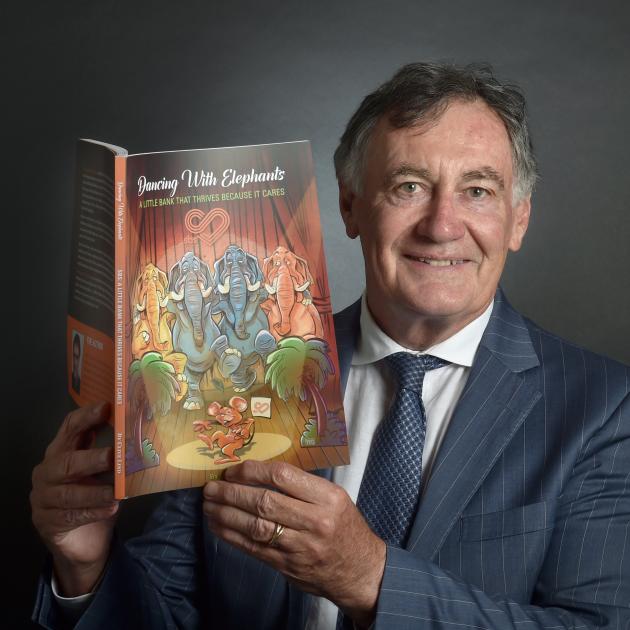 SBS chairman, John Ward, shows off the book celebrating the bank's 150th year. PHOTO: PETER MCINTOSH
This year, SBS bank marks its 150th year and its chairman, John Ward, was one of the original members of a group known as the "ginger group" that helped stop its sale to Westpac. He reflects with reporter Jacob McSweeny on the ups and downs of being at a small bank in an industry dominated by those much larger.

There are not many who can boast of working at the helm of a 150-year-old Otago institution.

SBS Bank chairman John Ward has been a major player at two of them.

"Not very many organisations get to 150 years.

"Obviously, the university is one. The ODT (Otago Daily Times) is slightly older, maybe seven or eight years older.

"To be involved with organisations of that ilk, it’s a wonderful experience ... not many make those timeframes," he said.

Mr Ward served as the the University of Otago’s 18th Chancellor.

He will step down as chairman of SBS bank next year. He has been in the role since 2012 but his origins with the bank go back much further, to a critical point in its history.

In the summer of 1990, the bank’s board announced its intention to sell the entity to Westpac.

"I was involved in opposing the Westpac takeover. I helped form that group."

"That group", would become known as the "ginger group". It was made up of Mr Ward, Acton Smith, Mike Piper, Warren Conway and Jeff Walker.

"We were prickly," Mr Ward said.

"We were firing grenades from the trenches, really, to try and get a reaction from the members and the public to get them thinking as to whether or not this really is a good thing for the wider community for it to be taken over by one of the big four pillar banks — one of the banks owned by shareholders principally out of Australia."

To the delight of John Ward and the rest of the "ginger group" the bank’s members rejected the proposal to sell it off.

"We felt there was another way for it to continue in its present form.

"Albeit it had to be harnessed up a bit and modified and pepped up. That group carried on doing that. To this day we’re edgy, we’re out there. We think we’re fulfilling a niche in the market."

It is the story of a small bank taking on one of the big banks. It is a narrative at the heart of Invercargill writer Clive Lind’s newly released book about SBS bank, Dancing With Elephants.

The importance of a smaller, local player in the banking world is still crucial, Mr Ward said.

"I think that’s recognised by the Reserve Bank and other authorities too. It’s a good thing having a smaller bank involved in the wider community.

"We can’t put too much competitive pressure on the major banks but the fact that we are there and we’re trying to deal with the best of rates, not all the time, but we are on occasions ... there’s a good deal of market competitiveness and the market needs that."

Mr Ward, who came from a family of seven children, was living overseas in places such as London, New York and Johannesburg when he and his wife, Sue, decided to come home for a year.

"Matters caught up with us by way of family, mortgage [and] partnership was offered up to me in the practice.

"Then my mother became terminally ill, so we stayed."

As it happened, Mr Ward felt little regret for leaving the globetrotting life behind to settle in Invercargill. He still calls the southern city home.

"I’ve been very lucky because my work commitments and some assignments have really taken me overseas.

"I’ve always enjoyed coming back and fitting back into regional New Zealand.

SBS has had a range of celebrations to mark its 150th year.

"This particular year we’ve had celebrations all around New Zealand," Mr Ward said.

"Celebrations with the authorities, with the Reserve Bank and with other entities who deal with us on a day-to-day basis — our other commercial partners within SBS.

"And, of course, and probably most importantly, our staff and our members who have been very, very loyal to us over many years."

There have been celebrations within every branch of the bank this year, including an event at which David Kirk was a keynote speaker.

The bank has also been a big supporter of KiwiHarvest, the organisation recycling fresh foods from supermarkets and cafes to feed those in need. As part of the 150th celebrations, SBS donated a truck to KiwiHarvest’s Hawke’s Bay team.

"Our members will expect us to be involved with the community on a wider basis, so we’ve had those sort of celebrations too," Mr Ward said.

One of the most pleasing factors for Mr Ward recently has been the bank posting positive figures this year.

"In round terms, the consideration back in ’91 was going to be, effectively, the main building in Invercargill going into a community trust and they would get rent off it.

"Also there was some superior interest being paid on deposits for a defined period, but there wasn’t a great deal more.

"This year ... we have an operating surplus of $40million, which is our highest ever, so it’s great in our 150th year to have a record surplus."

It was the past five years that had produced some of the biggest jumps in growth for the bank in terms of assets, loan advances, members’ equity and operating surplus, Mr Ward said.

Also, the strong growth in the past five years was on the back of the bank investing heavily in some of its subsidiary companies — Finance Now, FANZ and Southsure.

Doing that gave the bank a "bigger bang" in the New Zealand market and not only in Otago and Southland.

Technology is an area in which Mr Ward would like to see the bank improve.

"We’ve been a little slow in adapting to modern technology.

"For us to be able to fund a way into new technology is an expensive exercise, so we tend to be followers as to being leading edge."

Sad to find that SBS is now upping its charges with 50c to bank a cheque and to receive a paper statement that will cost $1.50. Not good enough SBS.