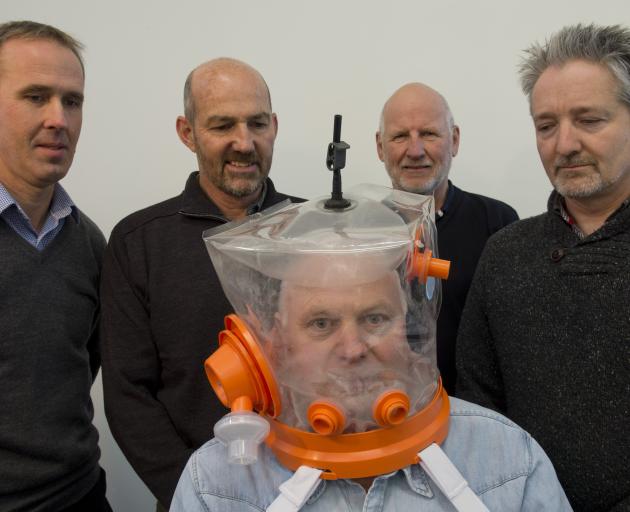 Mark Seaton, Chris Hopkins, William Early and Andrew Wallace look on as Richard Aimers tries on a ventilator hood made in Dunedin. PHOTO: GERARD O’BRIEN
A Dunedin-made ventilator hood that could be a major support for hospitals managing Covid-19 outbreaks is now being manufactured.

Former Scott Tech chief executive Chris Hopkins has helped get a range of specialists together — engineers, clinicians and government officials — to design and create the ventilator hoods.

The hoods help patients breathe and can prevent them needing full ventilation.

The hope is that the hoods will be able to eliminate the need for a ventilator and shorten the time people are in hospital.

Mr Hopkins began pulling a team together to build the hoods after a call for help from Trade and Export Growth Minister David Parker in March.

They have gone from early design and development at the beginning of April to a prototype in May, largely made from 3-D-printed parts.

Two hundred of the ventilator hoods are being manufactured in bunches of 50 by SouthMED Ltd, the company set up by Mr Hopkins and his cohort.

He said they were starting to gear up for "bulk assembly".

The plan now is for some of the 200 hoods to be given to hospital staff to get familiar with them.

"They’re primarily used in the Northern Hemisphere. We’re not as familiar with them ... certainly in Australia, New Zealand around this area."

SouthMED was in discussions with the Ministry of Health’s procurement arm, New Zealand Health Partnerships about getting the hoods sent to district health boards.

"They’re quite keen ... for some local supply because of the supply constraints everybody saw when the pandemic hit."

Covid-19 is under control in New Zealand, but Mr Hopkins said clinicians he had spoken with said there was still a need for respiratory support devices like the hood.

Regulatory approvals were needed, including international certification before the hoods could be bought and used on patients here.

"That’s sort of the one last piece of the puzzle for us."

The build of the hood involves several local companies. Covermarq is making the plastic for the hood, JTech Plastics is helping with the injection moulds and United Machinists helped with the seal at the base of the hood.