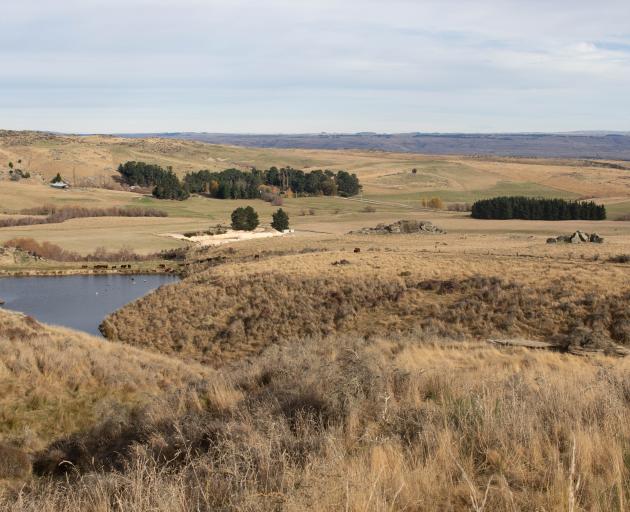 Foulden Maar, near Middlemarch.PHOTO: KIMBERLEY COLLINS
It appears the ancient Foulden Maar near Middlemarch and its millions of tonnes of fossil-laden diatomite have been saved from a miner’s excavator. Simon Hartley investigates who was behind Plaman Resources.The Malaysian and Isle of Man shareholders of failed diatomite miner Plaman Resources have remained tightlipped, since surprisingly placing the company in receivership and liquidation earlier this week.

Plaman's shareholders are Malaysian company Iris Corporation, which has a 50.95% stake, and little-known Burleigh Nominees Ltd, which has 49.05% and resides on the tax haven Isle of Man.

The pair agreed to put Plaman into voluntary receivership and liquidation.

Iris has not responded to email requests for an interview, while Burleigh supplied a curt response to an Isle of Man journalist's attempts to have more information disclosed.

The Isle of Man journalist contacted a spokesman for Burleigh Nominees this week, asking him what the financial implications were for the company, given Plaman's receivership.

Burleigh's spokesman responded there was "no comment on the matter " of Foulden Maar, in Otago.

The spokesman noted only that Burleigh Nominees Ltd "as the name suggests", holds shares in a nominee capacity, and is not the beneficial owner of any shares registered in its name.

Financial records for 2018 obtained on Burleigh show it is a private, limited liability company acting as a nominee shareholder service whose listed directors are five chartered accountants, all from the Isle of Man.

The Isle of Man's Government has been mired in accusations of businesses' involvement in money laundering, tax evasion and its role in complex offshore company structures.

According to the just appointed receiver, Plaman had "funding difficulties" at present.

Also, there has been a long wait since May last year for Overseas Investment Office (OIO) approval for Plaman to buy an additional, neighbouring property, both of which conspired to prompt the receivership.

The receivership is likely to scupper the controversial proposal to develop the ancient, fossil-laden Foulden Maar into a mine.

It appears inconceivable a new mining entity would want to buy into the cauldron of opposition created by scientists, environmentalists, the public and some Middlemarch locals.

Given the mine is likely to be put up for sale by the receivers, there is potential for public funds to be raised to buy and secure the site, possibly in a combined science-tourism venture.

Because of the receivership, the OIO had put Plaman's application "on hold" and noted its "financial position" was relevant to the application assessment; and third party submissions were still being accepted on the proposal.

Plaman's secured creditor is NZ Commercial Ventures, whose ultimate owner is the Goldman Sachs Group, which lent Plaman $US20million ($NZ30.6million) as a "bridging loan", due for repayment by May next year.

Initially the receiver takes precedence over liquidator, taking control of Plaman and its assets, and liaises with its board and the secured creditor, Goldman Sachs' subsidiary NZ Commercial Ventures.

McGrathNicol liquidator Conor McElhinney was contacted and confirmed Iris and Burleigh had jointly agreed to have Plaman placed in receivership and liquidation.

Receiver Neale Jackson of KordaMentha was contacted and said "issues" surrounding the OIO process were well-publicised, with the regulatory processes taking longer than Plaman expected.

"As a result, the company encountered funding difficulties and its directors asked that receivers be appointed," Mr Jackson said.

The receivers would assess all options for Plaman and its assets, ranging from recapitalisation to a potential full or partial sale of Plaman's assets, he said.

It is the second Australian company to fall foul of wanting to mine the fossil-laden Foulden Maar.

It was understood without the additional farm acreage, Plaman's project may not have been commercially viable, but final sign-off for Foulden Hill would have been down to Land Information Minister Eugenie Sage, who recently stopped another North Island mine expansion application.

The information that Goldman Sachs had lent Plaman $US20million was only revealed through a confidential Goldman Sachs report leaked to the ODT in April.

In February 2014, Plaman Resources Ltd was registered with the Companies Office in New Zealand, with majority shareholder Iris Corporation having links to the controversial palm oil industry.

Some types of diatomite are recognised as fertiliser for palm oil plantations.

Plaman had wanted to replace Iris as a shareholder, because of the negative sentiment attached to any palm oil involvement, its confidential report said.

The Goldman Sachs loan was until May next year and was structured so the first $US50million ($NZ74.7million) raised from any private placement would have been retained by Plaman, and any further cash would have gone towards repayments to Goldman Sachs, the report said.

There had also been a proposal for Plaman to complete a capital raising and list on the stock exchange in 2020, so it could "fully fund" the Foulden Hill project.

The Goldman Sachs report said a total of more than $470million had been estimated to get the project to full quarrying and production levels, of 500,000 tonnes per year, to be self-funded through cash flow generation once production began.