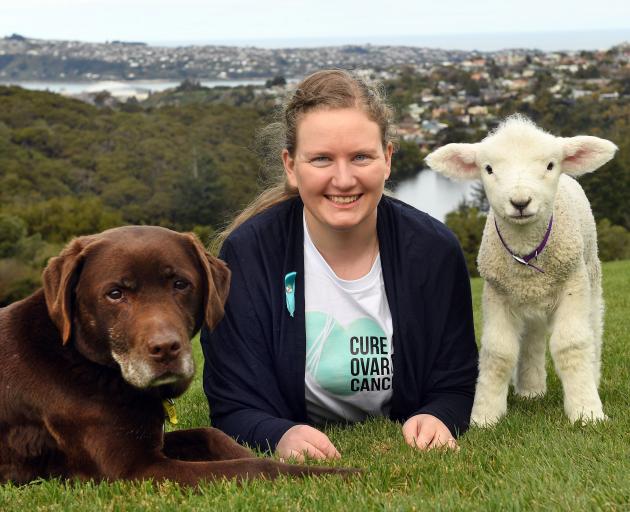 Cure Our Ovarian Cancer founder Jane Ludemann relaxes with Stella the dog and Milly the lamb. PHOTOS: STEPHEN JAQUIERY
The Otago Southland Employers Association’s Enrich: Celebrating Women in Business event in Dunedin this week attracted a range of inspiring speakers, none more so than Jane Ludemann, the founder of Cure Our Ovarian Cancer. She talks to business editor Sally Rae about her drive to improve both her outcome and that of other women.

She was moving to Dunedin to work as an optometrist; there were plans to put down roots in the city, buy into the practice, do some part-time work at Dunedin Hospital to keep up her specialist skills and do more volunteer aid work overseas.

A natural planner, she had it all worked out; after a year, she and her partner - now husband - Joe would start a family.

Their planned two children would grow up like their parents, with a love of the outdoors, and there would be family trips with friends who shared the same interests.

They would buy a home and plant fruit trees and, in decades to come, look back in satisfaction as they harvested their crop.

But on the drive from Wellington to Dunedin, on her way to start her "forever" job, those plans began to be torn to shreds.

Breaking the trip in Methven, Ms Ludemann woke with nagging abdominal pain which got worse and she was sent to Christchurch Hospital for emergency surgery.

A tumour had grown to 6cm, causing her ovary to twist. When the surgeon tried to remove the mass, it ruptured. She was told it was probably a common harmless fibroid.

September is Gynaecological Cancer Awareness Month. The most common symptoms of ovarian cancer are. —

Unfortunately, tests later revealed that was not the case and she was diagnosed with a rare cancer called low-grade serous carcinoma that affects about 100,000 women worldwide.

She was told she likely had only five to 15 years left to live with current treatments.

Her story is gut-wrenching - unbelievably sad - but it is also the story of a remarkable and courageous young woman who is focused on providing a better outcome both for her and others in the same situation.

Brought up on a farm in rural North Otago, Ms Ludemann has always been an achiever and a go-getter.

She has run three half-marathons, represented Otago at the World Debating Competition in Singapore, volunteered for Land Search and Rescue, and spent her 30th birthday providing volunteer eye care in Samoa.

In her work, she has diagnosed people with brain tumours and helped others avoid life-threatening strokes. 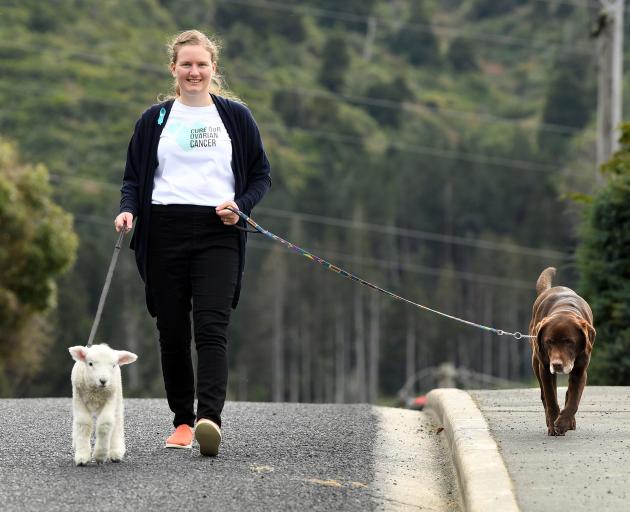 More than four years ago, Ms Ludemann began experiencing some vague symptoms that were slowly and gradually getting worse.

At the time, she was working full-time, studying for a master's degree part-time, getting up at 6am to go to the gym and had an active social life.

She spent two weeks volunteering overseas, another week on sick leave and thought she was just overdoing it. But the symptoms did not go away - they kept slowly and gradually getting worse.

It took more than two years, with regular visits to the doctor, and she still did not know what was wrong except she was reassured that it was "not serious and certainly not cancer".

But Ms Ludemann continued to have a nagging feeling that something was not right and kept presenting herself to the doctor.

At the beginning of 2017, after doing her own research on the internet, she plucked up the courage to ask if she might have bowel cancer.

She was told she was too young for cancer, but she bought a self-testing kit from a pharmacy to be certain and it came back negative.

It was about a month later that she landed in Christchurch Hospital and the nightmare was about to begin.

By the time she was diagnosed, she had eight out of the 10 symptoms characteristic of ovarian cancer.

Coincidentally, that was also the number of women with the disease initially misdiagnosed by their doctors, a North American study found.

Low-grade serous carcinoma - one of at least five distinct cancers that sit under the umbrella term ovarian cancer - "kills you pretty slowly".

It was only recognised as its own cancer in 2004 and, with current treatments, less than 15% of women survive.

There is no screening test but, with prompt testing, women could have better outcomes, she said.

Prior to the cancer diagnosis, Ms Ludemann had a mole removed, had a brain MRI scan, and had accessed bowel cancer screening.

Yet a CA-125 blood test and $220 ultrasound would have diagnosed the disease "in time". They were never offered to her.

She acknowledged she had felt like a hypochondriac, having repeatedly been told that she was worrying over nothing, and to come back if the symptoms got worse. Her story was "pretty typical" of how most women eventually got diagnosed, she said.

Following her diagnosis, Ms Ludemann helped produce, distribute and pay for a symptoms awareness poster sent to every GP practice in New Zealand for waiting room walls. But it did not end there.

Specialists told Ms Ludemann that general medical science was not the limiting factor as to whether women with her cancer lived or died from the disease - it was the rate of research.

In 2018, less than 1% of the ovarian cancer research published on Scopus - the largest abstract and citation database of peer-reviewed literature - was on her cancer, despite it accounting for 3%-8% of all ovarian cancers diagnosed.

That same year, it received less research for that entire year than breast cancer did in a single day.

According to Australian data, rare cancers account for about 45% of all cancer deaths but only receive 13.5% of research funding.

Women with Ms Ludemann's cancer did not live long enough to mobilise together and fight for change in the way breast cancer women have, she said.

Almost half of all women with her cancer are diagnosed under 40. It was a disease that left children without their mothers and parents without their children.

So she decided to fight for "all of us" and early last year she founded Cure Our Ovarian Cancer, a charity that facilitates donations for research on low-grade serous ovarian cancer.

"If the science and treatments required to save our lives already exist, and the main barrier to whether we live or die is the rate of research, and that research is limited by funding, then why not create an alternative funding resource?"

When she was diagnosed, there was no publicised way in the world to give directly to research on her cancer.

She built a website, registered the charity and approached organisations overseas and asked them to create pathways to give to research in their countries.

Leading United States cancer hospital MD Anderson was one of the first to come on board. More than $100,000 has been raised so far - every cent, bar a small payment processing fee, went to research.

"To give an analogy, our cancer is currently stuck in the fax age while other cancers have ultra-fast broadband. We don't need to create new science from scratch. We just need the funds to take advantage of what is already out there."

Her dream is to see Cure Our Ovarian Cancer raise $20million; to start with, it needs to raise another $100,000 which would let it double the research it currently supported.

Speaking out did not sit at all comfortably with Ms Ludemann, a very private person, but she realised she had to give the charity a voice.

She also felt an obligation to try as hard as she could - "to try and make it better for, hopefully, me, but for other people going through this too".

"I believe in the concept that it's possible to definitely improve survival with my cancer.

"Researchers believe it too."

In hindsight, Ms Ludemann believed her doctor was negligent. However, while there would have been some doctors who would have saved her life, a lot would have done "exactly the same".

"I think if I had understood, I'd have pushed to be seen and think things would have been OK, but the reality is most women are not diagnosed at stage 1 and that is why we need better treatments," she said.

She acknowledged it would have been even harder to have the diagnosis 20 years ago; technology meant she was able to connect with other women with the same cancer around the world.

"It's so unfair. It's not unfair just because it's me, these are just amazing women," she said.

Ms Ludemann was also fortunate to have "fantastic" support, including from her husband, whom she married last year, and parents Grant and Ele.

Cruelly, she is their only surviving child; her two brothers were both born with degenerative brain disorders, one living 20 weeks and the other dying shortly after his 5th birthday.

She quit her job at Stewart Caithness Gray Optometrists earlier this year; that was a very difficult decision to make - "they have been just amazing" - but it was getting "just too much".

Instead, she is focused on Cure Our Ovarian Cancer while balancing that with spending time with her husband, going for walks with their dog and "doing things that are also important in this context".

Achieving that balance was "work in progress".

"If I can pull this off, it could change my outcome and it will all be worth it," she said.

To give to Cure Our Ovarian Cancer, visit cureourovariancancer.org/nz