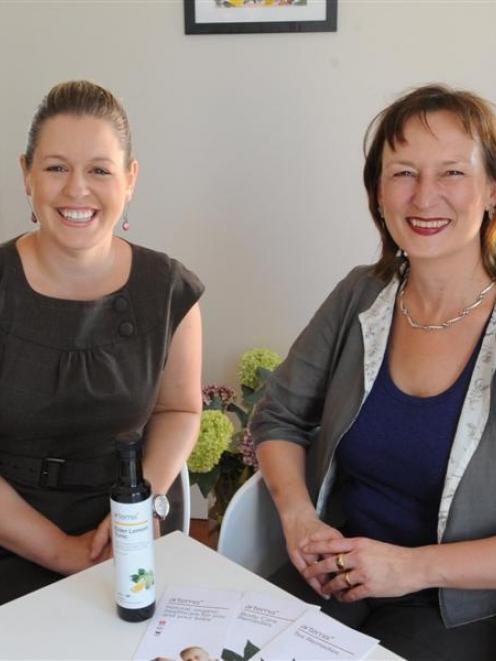 But Sandra Clair, the founder of Dunedin-based natural health company Artemis, can easily make the transition between the two.

She had been trained academically in herbal medicine and also had the opportunity to do a three-year apprenticeship with a Swiss Catholic nun who taught her herbal remedy traditions that went back many centuries.

Ms Clair came to New Zealand in 1995 and ''really loved the place''. She was particularly impressed by the quality of plants, as they were very potent.

Initially, she was working one-on-one with patients, making individual prescriptions for them, before she was approached by health stores in Dunedin asking if they could stock her products, because people had been asking for them.

That was ''quite a mind-boggling proposition'' but also ''fantastic'', as it showed there was both a niche and a need for good-quality herbal medicine, she said.

It was time to do it on a bigger scale so she ''took the plunge'' and, with a friend, started Artemis. Her friend pulled out soon after, due to an accident, and Ms Clair carried on alone.

The business had grown exponentially, collecting awards along the way, including both the Deloitte Fast 50 award for the fastest growing manufacturer in Otago and the lower South Island last year, and the ethics award at the 2012 Westpac Otago Chamber of Commerce Business Excellence Awards.

The company's aim was to provide natural family healthcare based on traditional European formulations and modern scientific research to increase health, vitality and quality of life.

Artemis products were stocked in health stores and pharmacies throughout New Zealand, and the company began exporting in 2008.

It now sends its products to Singapore, China, Malaysia and Hong Kong and was negotiating with some companies in Taiwan. Continued growth in Asia was one of the company's aims.

The Asian market was important as it provided the volume the company could not get in New Zealand and also natural healthcare was very much part of daily life, and the concept of herbs was ''not scary''.

Sales and marketing manager Rebecca Flintoft said it had taken a long time in New Zealand to ''really get traction'' with educating people about natural healthcare, the strength of herbal remedies and convincing them to use them.

Mrs Flintoft, who joined Artemis in 2009, came from a finance background which included running her own mortgage-broking company. She discovered that organics and natural health was a ''very, very fast-moving business''.

The majority of the Artemis team - there are eight staff including Ms Clair and Mrs Flintoft - did not come from a natural health background but now all ''live and breathe it'', she said.

Mrs Flintoft project-managed a rebranding strategy, working with another Dunedin business, BrandAid+, to take it from what she described as a ''cottagey'' look to a brand to take it to the next step to grow the export market and get more into ''mainstream'' in New Zealand.

In 2005, the company bought its own premises in Fingall St and refurbished it to suit its requirements.

Every year, the company increased the amount of products it could source in New Zealand.

Ms Clair was an active supporter of organic agriculture in New Zealand and wanted to foster that initiative.

She came from a valley in Switzerland where herbs had been grown for ''literally hundreds of years'', yet there was no tradition for New Zealand in herb growing, she said.

While she wanted to source as much as possible in New Zealand, what she could not obtain she sourced from alpine regions of Europe.

Ms Clair said she would rather sacrifice margins than quality of product because people's health was ''first and foremost'' and she would not compromise on quality.

From the beginning, Artemis had ''moved very much in the right direction'', she said.

She had no regrets about moving to New Zealand and felt like she had contributed to the country ''in return for having a wonderful life here''. She was also happy to have been able to contribute in such a way that she was ensuring a tradition was continued.

The business continued to grow, despite the economic recession, Mrs Flintoft said.

Dunedin was an ideal location as it was close to Central Otago, where a lot of herbs were collected, she said.

Mrs Clair had found the support from the local business community to be ''outstanding''.

She was also grateful for the support of the Dunedin City Council's Economic Development Unit and New Zealand Trade and Enterprise.

She was fortunate to have ''very capable'' people working at Artemis and her role had moved to one that was predominantly supervisory, along with product development, education and travel - ''because people do want to see the founder''.

She still enjoyed nothing better than heading to Central Otago and collecting herbs for her recipes, she said.