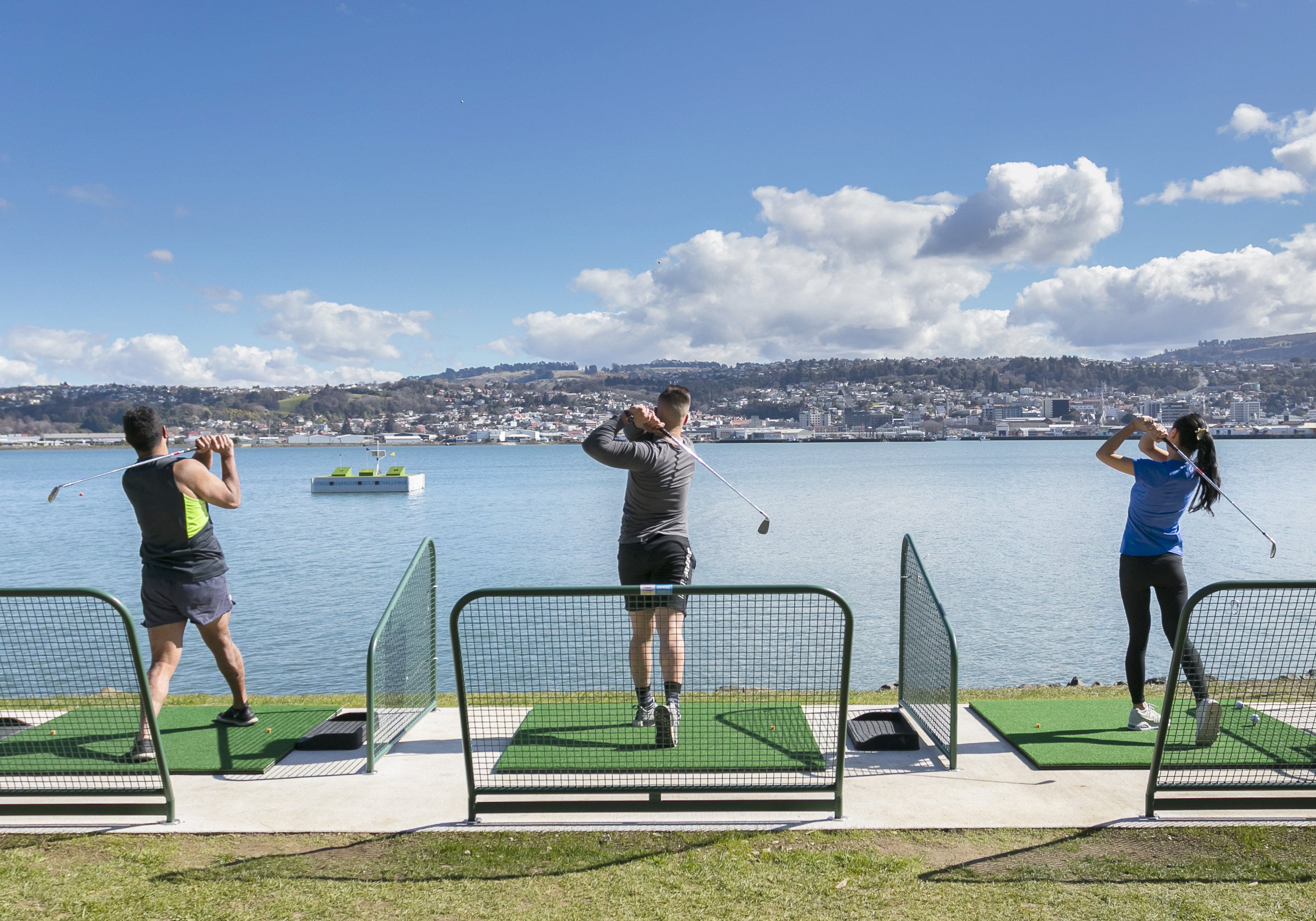 The Dunedin business opened on a small reserve south of Vauxhall Yacht Club in 2019, and offers golfers a chance to win $10,000 if they can score a hole-in-one by hitting a golf ball into a hole on a floating pontoon, positioned 95m away on Otago Harbour.

Owner Peter Graham said it was unfortunate the business opened about the same time as the Covid-19 pandemic hit, forcing him to suspend his operations.

However, he was excited about the amount of interest he was now receiving from Dunedin residents about using the facilities.

"We pulled the pin after Covid.

"We thought we’d just sit back and wait and see what happens with the borders."

Despite the temporary closure, he said staff had continued to work on the business, including bringing a shipping container to the site to store the bikes and kayaks.

Over the past month, he had started receiving calls from the public, asking when it would reopen.

"I’m getting so many calls coming in, asking about it.

"There’s heaps of phone calls in the weekends from people planning walking trips, wanting to know if the cafe is open.

"There’s also lots of people wanting to hire water [equipment] and E-bikes, since it’s a nice cheap affordable option for Dunedin folk to explore the new cycle track to Macandrew Bay that has recently been completed.

"It’s on everybody’s radar to go there over the summer.

Mr Graham said that initially, the coffee/cafe and the E-bike, kayak and paddleboard hire would reopen at weekends and on the occasional Friday afternoon or evening.

The hole-in-one facility would reopen soon after.

"We won’t be able to open it until we recruit more ball-retrieval staff, since we’re starting from scratch again.

"The golf will start once we’ve hired enough people for that."

are we learning anything about our environments that we are now going to fill the harbour with plastic toys and golfballs and whether we have covid or not have a lot of equipment that millions of people, are leaving their germs on (and probably not sanitised before another uses the golf club or the paddles) just like the binnoculars at the albatross centre.. etc. etc. - i shake my head

I just cannot get my head around the direct commercial logic of this thing. Why set up a driving range that needs a diver to recover the balls? If you use a field, which is also a far closer approximation to live golf, then commercially available 'golf ball slurpers' take seconds to do a job that will take hours of specialist time in this situation - It just don't make no sense.

I guess that it does make sense in a South China Sea sort of way, in that the threat of lethal missiles from a land base secures effective exclusive ownership of a large area of the Otago Harbour for this private operation. This common area was freely navigable by any citizen. No longer, and as a member of the local rowing club, this does affect me signicantly.

Notably, the DCC owned 'base' now appears to be zoned Commercial, Use: 55 Recreational: Passive Outdoor. I would not be surprised to see this headlining, zonebusting golf-hole oddity fade away rapidly, to be replaced by more mundane but lucrative activites that can fit within this unusual zoning - Maybe a posh seafood restaurant with a large outdoor seated area? The odd golf ball may serve to keep the plebs at a polite distance

So the commercial viability concerns you? (it shouldn't, it's not your money). No, your real concern is that you feel your "rights" as a rower are affected. Only a very small part of the "common area" you describe is affected by this. Just row around it.

The harbour is for everyone - not just certain groups - and this company jumped through a lot of official hoops to get permission to operate (it's well documented in the media).

Does the term NIMBY strike a chord?

Who collects the balls?
Or have I missed something?

As part of their consent to operate the hole in one activity they must remove the balls from the harbour floor.

Just a couple of wee points.

When I use the common ground, there is a difference in my behaviour. I pass through it momentarily and move on. Even then, I can and often do share that space with other users. I do not occupy and effectively excude all other users from that area permanently for commercial gain.

The practice of enclosing common ground is always lucrative for the encloser, and is thus usually well worth jumping through any official hoops involved.

This is often facilitated by the fact that the encloser and those who officially sanction the enclosure have more in common with each other than those who will be excluded.

Historically it has always been a major social issue. The Highland Clearances are but one example. The ongoing siege of the Wanaka Domain is another much more similar one.

The Harbour is surrounded by recreational domain. Much of this has at one time or another been the subject of similar enclosure attempts. In this particular case, it may not be my money, but it is partially my land.

Harbour conditions make this a rare sheltered run. This obstacle cuts it in half, and it cannot be rowed or kayaked around on most days.