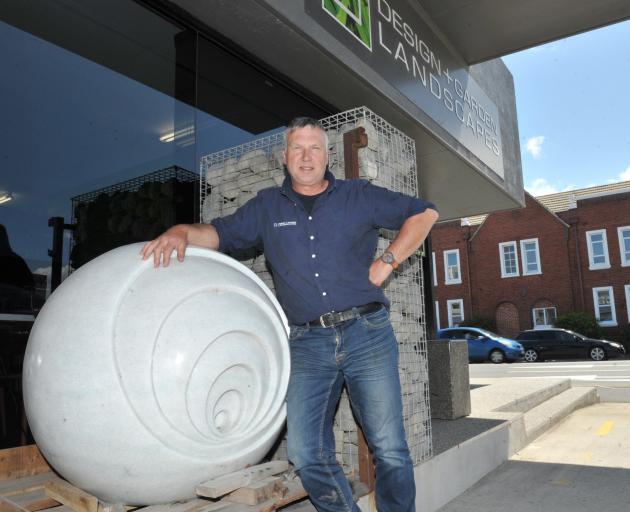 Design and Garden Landscapes director Wayne Butson outside his St Andrew St office in Dunedin. PHOTO: GREGOR RICHARDSON
Carpenters, plasterers, landscape gardeners and scaffolders are among some of the trades expected to face the biggest demand for workers in Otago’s construction industry over the next decade.

A feasibility study carried out by the Ministry of Social Development (MSD), Dunedin City Council and consultants Aukaha found there were more than 120 major construction projects planned in Otago over the next 10 years.

If all of those projects were to go ahead, the region would need as many as 2500 more workers at points where activity was high.

Most of the projects around Dunedin range across the hospital build, infrastructure and education (work at the University of Otago). In places like Central Otago and Queenstown the work is expected to be more commercial and residential.

The study looked at which professions would be under the most pressure during the next 10 years.

His company picked up new staff by taking on apprentices and they had three now.

"If you put an ad in the paper you’re only likely to get ... someone perhaps new coming into the area from out of town."

He said most plastering companies in the area were medium to small-sized crews that had about five or six workers and were unlikely to get involved with large projects like the hospital build.

He said despite predictions of a large increases in unemployment, he had not noticed a lot of people hunting for jobs.

"I certainly haven’t seen that in our industry at the moment.

"The thought would have been if there’s plenty of people out there in the market there’s a better selection for employers to be able to pick and choose. I don’t think that’s the case."

Many trades businesses were busy and stable in Dunedin, he said, and it was materials that were proving harder to get hold of than workers at the moment.

Mr Butson expected subcontractor trades to be tied up when the hospital build kicked into gear and it was likely that shortage would ripple across all of the trades.

Jobs that would be moderately affected by the changes in construction activity included project builders, excavators and drainlayers.

Those that were going to be least affected by the changes in construction activity, but more so by population and other factors, included plumbers, roof tilers, floor finishers and bricklayers, among others. These jobs were already increasing but were expected to exceed demand in 10 to 15 years or earlier in cases where there were large projects.

The feasibility study looked at from where workers were most likely to come.

Far and away the biggest supplier to the construction industry was people who had changed careers, which made up half of new workers.

Migrant workers were the next biggest suppliers to the workforce (14%), followed by tertiary enrolments (10%). New Zealanders back from overseas, school leavers, beneficiaries and former prisoners made up the rest.

A skills hub focused on Dunedin hospital build workers has been suggested in the report.

During the build this hub would be focused on retaining those workers as well as providing support functions like inductions, health and safety and further skills development.

I have spent almost my entire working life in the boom and bust construction industry. I have watched people come and then leave for better opportunities, better wages and better conditions. This corner of the trade sector has yet to recover from the deregulation of the trades in the 1990s. I read and hear that there needs to be more houses built, but what I don't read or hear is where the carpenters are coming from, or how to retain them when they get trained. Once they leave the trade they do not return.