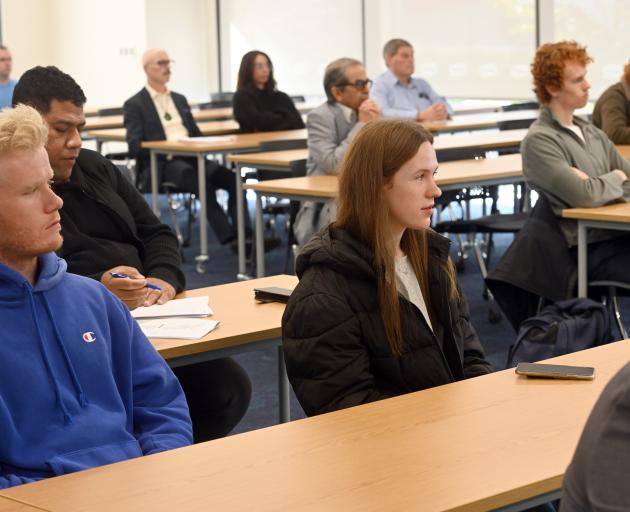 University of Otago Business School executive in residence Simon Allen (below) gives a lecture to students on Thursday. PHOTOS: LINDA ROBERTSON
Simon Allen has done a lot in the business world since he graduated from University of Otago in the late 1970s. He returned this week to pass on some advice to young people in the sector. Riley Kennedy  reports. 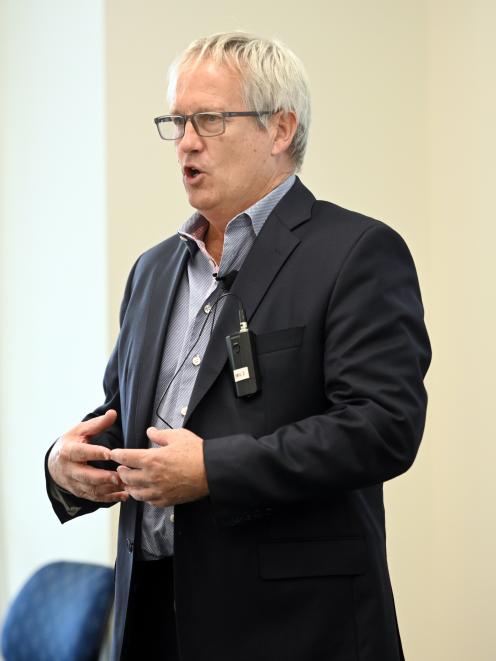 "Change is the constant."

Those were the words of wisdom Simon Allen passed on to the University of Otago Business School this year.

He was the school’s first executive in residence since 2019 after Covid-19 halted the programme last year.

Mr Allen spent a week on campus, talking to commerce students and staff about his experiences in insurance, governance and climate change, including giving a presentation on what the Government does when business fails.

The Howick-born businessman’s journey did not start in the university’s commerce department, but rather in its science department in 1976, when he was doing his science degree.

"Like many, I did not really know what I wanted to do.

"Along the journey I realised I wanted to do commerce so I went back to Auckland to do that," he said.

Even though it was nearly 40 years ago, he could still remember the room he was in at University College.

After graduating from the University of Auckland, Mr Allen was headhunted to work for investment bank, ABN AMRO in Australia, and was back in New Zealand four years later to set up a branch here.

Since then, Mr Allen has sat on multiple boards, worked at the stock exchange and done work for the Government.

During his week in residence, Mr Allen tried to teach the students what they wanted to know.

"The big question they had was talking about careers and experiences I might have had."

Those experiences were in banking, government, insurance and governance.

Mr Allen made sure the business students were aware they needed to take climate change seriously in their future careers.

"That theme is important to me, and I’ve also talked a bit about how the Government works with business and I have shared my experiences there," he said.

With his insurance hat on, Mr Allen said the past seven years had had record numbers of claims for insurers, and that could increase with climate change.

"It’s not the end of the world — it can be fixed, you can mitigate it, you can adapt and you can take action — but if you wait for the last minute we will have trouble.

"So we need a thinking change and a collective societal approach."

"There will be a lot of people who will need to be good at what they do with the climate, not just at an academic level but also looking at the responses and how you respond to climate change," he said.

He believed the opportunities were positive for anyone looking at studying business.

"There is demand for their services and it’s going to keep on rising so it’s a good place to be," he said.

Comparing when he studied business with now, student life was "reasonably similar", he said, laughing.

"How a business now is run ... that has changed because society has applied whole new ground rules for businesses.

"If you popped me with my knowledge 50 years ago into a current business I would be short of a lot of knowledge about the things I needed to know," he said

Business graduates had good knowledge of the ethics and societal demand regarding things such as environmental governance, Mr Allen said.

A highlight of his week was being able to share his knowledge and wisdom.