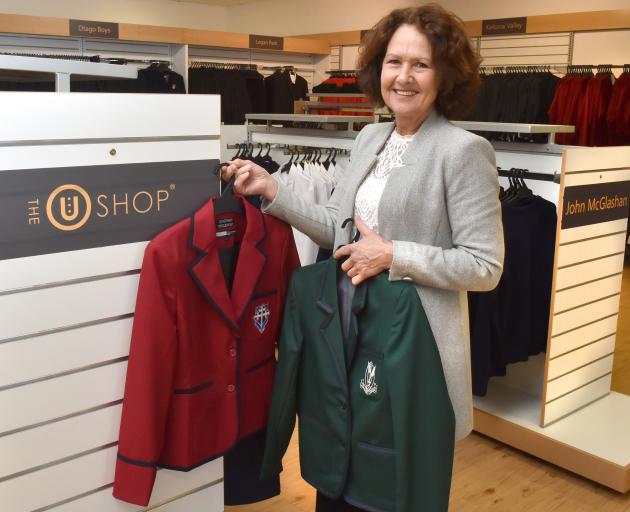 Red or green? Uniform Group director Adele Gordon inside the new U Shop that opens on Monday. PHOTO: GREGOR RICHARDSON
There is a new school uniform shop in town.

The Uniform Group, which now has 11 shops throughout the country, has opened its first Dunedin shop in Filleul St and will offer uniforms for several major Dunedin schools.

The U Shop officially opens on Monday next week, but customers have started to trickle in already as the doors are open and the store is staffed and stocked.

Uniform Group director Adele Gordon said it operated a small shop at Kavanagh College for about a year when H&J Smith, a major uniform supplier, announced it would be leaving the city in January.

"This opportunity has arisen with H&J [Smith] departing ... we’ve looked at it and thought with the number of schools that they were selling to we could make an on-site retail shop workable, viable and offer the customer service that we wanted to achieve," Ms Gordon said.

Uniform Group visited the schools H&J Smith had sold to previously and put its proposal forward: a local retail shop offering school uniforms that also supported local suppliers where they could.

The Filleul St site was leased by Baby City until August, but that retailer left the city and the lease became available.

"We looked at the size and the position. Parking was very important to us in order for people to come in — it’s not something you can stop for five minutes and whizz in and whizz out."

It has several car parks behind the shop and it is bigger than most of its other stores around the country.

After the lease was signed Uniform Group wasable to go back to the schools and advance talks with them.

It also co-ordinated with H&J Smith to purchase stock that was still current and what schools wanted to carry on with.

What is in the store now is a mixture of that stock and what Uniform Group has been able to supply itself.

Ms Gordon said Uniform Group would be heavily involved with the manufacture of uniforms and their stock would replenish the store as the former H&J Smith stock sold out.

They are now focusing on "back-to-school" sales as they approach the new school year.

Uniform Group began in 1991 and has always specialised in school uniforms, but before 2008 it also sold uniforms to several government departments.