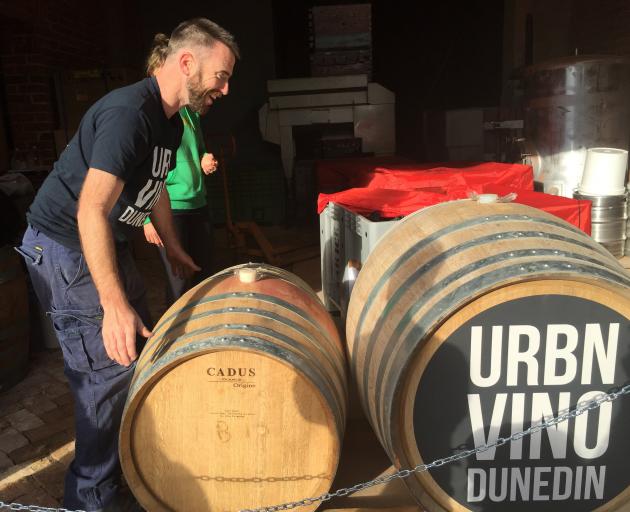 Winemaker Brendan Seal hopes a permanent location for an urban winery in Dunedin could be secured as soon as next year. Photo supplied.
Fancy being able to produce your own pinot noir?

Winemaker Brendan Seal is a small step closer to his aim of bringing winemaking to Dunedin via his Urbn Vino project.

One of the rewards for those investing in the project through crowdfunding is the opportunity to become a ''winemaking apprentice'' next year.

Ten people would have an opportunity to be involved in the process ''all the way through'', Mr Seal said.

Ten months after the harvest, the group would be able to blend their own pinot noir and bottle it under their own label, taking home six bottles, plus a magnum, of their own Central Otago Pinot Noir 2017.

It was a fun initiative, gaining the attention of both the public and the media.

From there, having proved the idea ''had some traction'', he decided on his next step.

He chose crowdfunding, although it was ''really only a baby step'', he said.

By offering some rewards in advance, Mr Seal hoped to raise enough money to purchase pinot noir grapes and oak barrels in time for the 2017 harvest.

Then he would again provide the winemaking equipment, experience and labour and make Central Otago wines in the city again.

He has already hit the $20,000 target on crowdfunding platform PledgeMe and, if he got additional funding, then it would help him to lease premises for a permanent winery location.

Initially, he thought that might happen in 2018 but it could be as soon as next year, he said.

While there had been a lot of hard work involved, the interest from people had been ''fantastic''.

Mr Seal said he was grateful for the support in the city, which ranged from the Dunedin City Council to the Otago Chamber of Commerce.