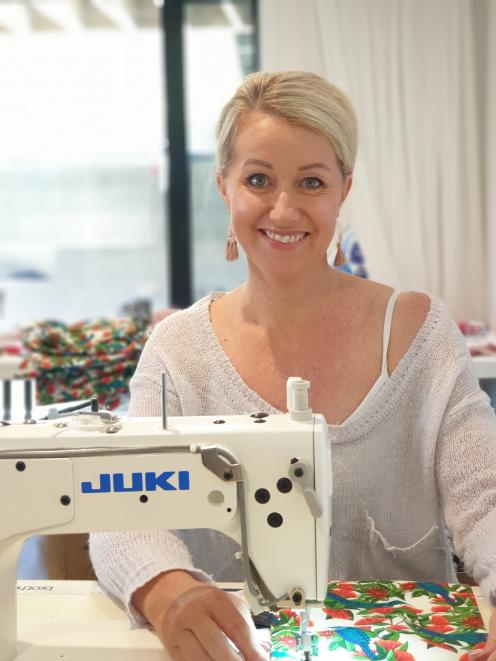 Emma Conyngham from Wanaka started Merry Waste-Free Christmas in a quest to rid New Zealand of wrapping paper and sticky tape. PHOTO: JO COOPER
It was only supposed to be a little project, selling reusable Christmas gift bags at Wanaka’s Sunday craft market.

Emma Conyngham, a local who made her own set of bags three years ago, thought she needed to do something to earn some money.

Her Merry Waste-Free Christmas website went live in the last weekend of October and she sold out in 12 hours.

So she bought a whole lot more fabric, and it "just kept going viral" to the point that her phone shut off as it could not cope with the number of orders and notifications.

The upshot was she now employs 12 women and thought nothing of ordering 6km of ribbon.

"People are tired of waste," she said.

When it came to wrapping paper and tape, "half an hour later it goes in the bin" and, even if it was recyclable, an enormous amount of energy was required during that process. Much of it was not recyclable, she said.

Her bags would last for decades and become part of family traditions, made out of traditional fabrics as well as Kiwiana styles. She was adamant they had to look "beautiful" as well as being environmentally friendly.

As the business expanded, she had issued a plea for help, and her staff were now based in Wanaka, Queenstown, Cromwell and Alexandra.

Her rumpus room had been converted to a sewing room and she was working alongside two of her staff, both of whom lost their former jobs due to Covid-19.

They were watching "cheesy" movies — including Christmas favourites Love Actually and The Holiday multiple times — and playing Christmas carols as they worked.

Being able to employ people was a "real bonus", and she had been investigating adapting sewing machines for wheelchair users so she could potentially employ disabled people.

Mrs Conyngham was looking to expand the business next year, not just for Christmas but also for other celebrations such as birthdays, anniversaries, Valentine’s Day and Mother’s and Father’s Days.

She urged people to stop and think every time they went to "reach for the wrapping paper and Sellotape", and remember there were more environmentally friendly options.