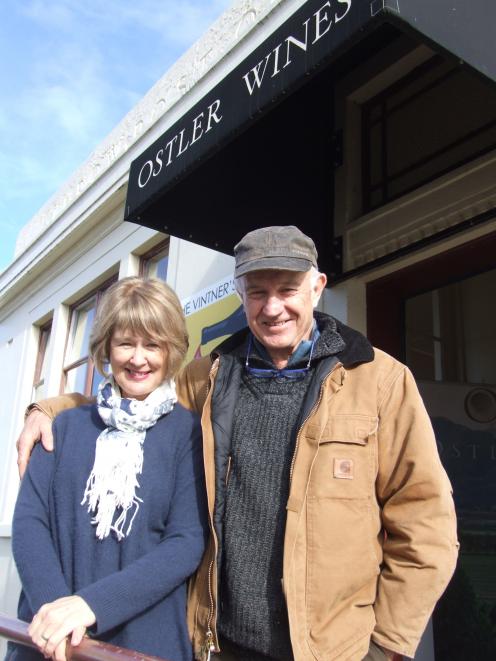 Anne and Jim Jerram have sold their wine company Ostler Wines to ACG Wines Ltd. PHOTO: SALLY RAE
Jim Jerram quips he has been out of his comfort zone for the past two decades.

He was convinced they could do something "quite special" with a style of wine that was different from Central Otago, given the geology and geography of the district.

That had proven to be the case and, while it had been a "wonderful journey", the couple announced this week they had sold Ostler Wines to ACG Wines Ltd.

It will be operated by The Lindis Group, a luxury hospitality company which has three lodges in New Zealand, including the Lindis Lodge in the Ahuriri Valley. It also has a wine business, Paroa Bay Winery, with its own luxury lodge in Northland.

The company has bought all Ostler Caroline’s Pinot Noir wine stock, the Ostler and Caroline’s brands and the vineyard on which the grapes for that wine were grown.

The terms of the sale agreement included a collaboration to ensure an uninterrupted service of existing Ostler markets and clients for an interim 12-month period with the full range of other Ostler Wines, with retail sales continuing from the Ostler Wines cellar door, The Vintners Drop in Kurow and online.

Dr Jerram was delighted to have secured a succession plan involving such a tourism and wine-focused company and one with links to the Waitaki district.

"Ours is a boutique premium wine operation which has needed the resources and interest of a suitable partner with skin in the game to take the brand forward."

For about 10 years, he had been trying to get investment capital to take the business to the scale that would enable him to appoint others to the roles he did not necessarily do that well, he said.

Dr Jerram previously ran the University of Otago’s Student Health service, having worked as a volunteer doctor at Kunde Hospital, near Mt Everest, and as a family practitioner in Nelson.

It was January 2001 when he first bought land in the valley, having tried to do "some sort of due diligence" with his winemaker brother-in-law Jeff Sinnott. The climate turned out to be cooler than their very optimistic estimates, but that also produced such quality wine.

Dr Jerram acknowledged he could not have done it without Mr Sinnott who had guided the project, especially in the early stages, and his "patient, extremely tolerant wife" who had been very supportive of what was a "pretty far out project".

Dr Jerram was confident in the farming skills and practical skills he had picked up while working in the high country as a medical student.

The viticulture aspect was hard enough in the Waitaki climate, which was partly why the wine was so good, he said.

"Wine is liquid geography. And the Waitaki terroir, particularly that of Clos Ostler, is unique in the world of wine."

Once they started producing grapes, then he had the big learning curve regarding marketing, sales and building a brand.

"The biggest thing for me is the brand will continue and build and that’s a legacy, I suppose. From that point of view, we’re thrilled."

There was some relief that the ongoing rigours of the business would ease, and some sadness, but they were delighted with the sale.

"This has been a fun journey, it’s been hard, it’s been at times anxious but it’s been very gratifying and it’s been all about the people," Dr Jerram said.

The couple were grateful for the support of their "wonderful" staff, volunteers, family, friends and clients around New Zealand and internationally, and the wine industry.

People were "starting to beat a path" to the cellar door and it was gratifying to get recognition from much bigger wine regions. It was an "exquisite" time to sell, with the evolvement of wine tourism and also the Alps 2 Ocean Cycle trail through the Waitaki Valley.

Dr Jerram had plenty of interests to pursue, while Mrs Jerram recently completed her PhD and was resuming her academic career as a researcher with the University of Sydney, while continuing to work at the Kurow Medical Centre.

The Lindis Group managing director William Hudson said the intention was to take the Ostler Caroline’s pinot noir — which has won six consecutive gold medals at the London International Wine Challenge — and "polish the diamond".

He described it was one of New Zealand’s best pinot noirs.