"Some of us have to go to foodbanks just to live."

That was a Zeagold staff member, who declined to be named, speaking at their strike for better pay and conditions yesterday.

Sixty staff from the company’s Waikouaiti site continued a two-day strike after negotiations between the company and union broke down.

About 35 workers gathered outside its head office yesterday in Dunedin to send a message that they "just want a fair deal".

The company is one of the largest egg producers in the country, with 1.3 million hens. 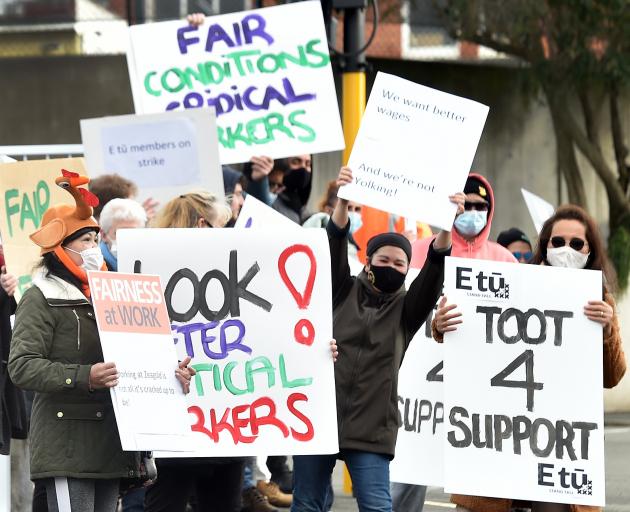 E tu started bargaining for better pay and conditions in early February, but little progress had been made, the union’s organiser Gwyn Stevenson said.

Workers had been accepting "pretty mediocre" deals in the past and wanted to be taken seriously this time, he said.

The union was asking for a 10% pay increase and wanted to negotiate overtime rates.

Mr Stevenson admitted the pay increase was high but said that given the rising cost of essential items, such as petrol and groceries, the union believed it was fair.

"They work hard and they feel like they aren’t being recognised for it."

As well as the strike, workers were on an overtime ban until June 14, he said.

It was a shame that bargaining had ended up at a strike — "it’s not something we wanted to do, we made that very clear," Mr Stevenson said.

Another worker, who also did not want to be named, said he had worked at the company for 27 years and was the lowest paid in his family. He declined to say how much he earned.

Another worker said they had been "fighting for the scraps" for too long.

Others at yesterday’s strike did not want to comment out of fear for their employment.

The strike ended this morning.

On Tuesday, 30 workers at the company’s Auckland plant also walked off the job.

When contacted, Mainland Poultry chief executive John McKay said as negotiations were still in progress, he was unable to comment in detail.

However, he said the company was disappointed the strike action had been taken given the "constructive discussions" it had had with the union to date.

The company was a major employer in the South and it took its responsibility to its workers seriously, Mr McKay said.

"That’s why we continue to work hard to reach a fair and reasonable settlement for everyone involved."

It remained committed to negotiating in good faith and was looking for a positive and quick outcome to the situation.