Since Lime e-scooters launched in Auckland and Christchurch last month, more than 300,000 individual trips have been taken on the service,  and it is set to expand into Dunedin and Wellington before the end of the year. Reporter Tim Miller goes for a ride.

A quick flick of the thumb and off it whizzes.

I feel like a kid again and instantly understand the huge and growing interest in e-scooters both in New Zealand and overseas.

After a few quick circuits of Northeast Valley’s Allen St, outside Dunedin Electric Bikes, I already feel like a pro. I’m test-riding two  e-scooters — both faster and more powerful than the Lime share e-scooters coming to Dunedin — and they could not be easier to pick up and ride.

Allen St is only about 100m long, but both scooters hit 25kmh before I have to even worry about applying the brakes and avoid spilling out into a busy North Rd.

I ride on the road, then transfer on to the footpath, then back on to the road no problem. 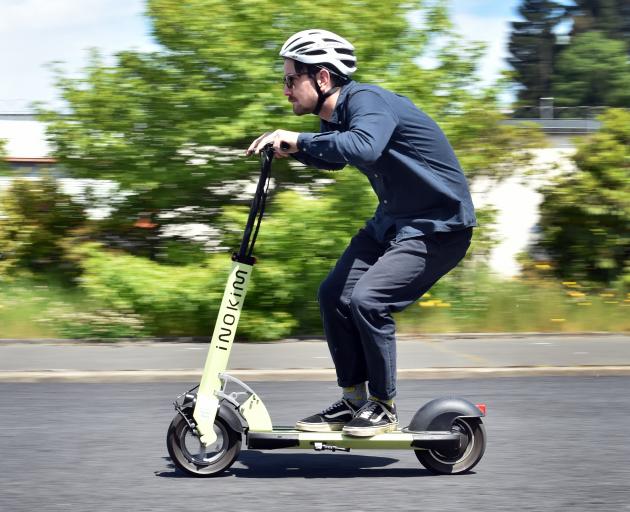 As soon as I step off, I want back on — they’re easy to handle and powerful, but mostly they are a lot of fun. I can see myself using one to commute to and from work or the supermarket when I’m too tired for my bike.

They’re coming and I can’t wait.

Two months ago, only a handful of New Zealanders knew what a Lime scooter was. Now it is difficult to find anyone who has not heard of the scooter-sharing company after it launched three-month trials in Auckland and Christchurch last month.

Since then more than 300,000 individual trips have been taken on the e-scooters and the service is set to expand into Dunedin and Wellington before the end of the year. A rapid rise in popularity is also leading to a sharp increase in the number of e-scooter-related ACC claims.

After just a month of Lime’s operation, nearly 150 ACC claims had been lodged for injuries caused by electric scooters.

In North America some large cities, such as Seattle, are trying to keep scooter-sharing companies out until they can modify laws and roads to make them safer.

Auckland Council wants to restrict the speed at which the scooters can travel on footpaths to 10kmh and force riders to wear a helmet. It has just spent $10,000 for 40 large posters and dozens of bus stop posters and large footpath stickers to encourage people to wear helmets and ride safely.

There is no Dunedin City Council bylaw restricting the use of the scooters in the city, but the council says it is working with Lime to create a safety agreement.

But not everyone is convinced.

The Dunedin Pedestrian Action Network is concerned the scooters will put pedestrians at risk, while Age Concern Otago executive officer Debbie George says there are already so many hazards on  footpaths that adding another — one which can reach 27kmh — is extremely concerning.

Older residents rely on the footpaths to move freely around the city, and the addition of scooters might mean many choose to stay home. But scooters aren’t just something for younger people.

"A lot of older people use push bikes and things, so it might be a fun activity for them to get involved in," she said.

If the scooters are eventually banned from the city’s footpaths then a natural place for them would seem to be the city’s new cycleways.

The only issue is the rules surrounding e-scooters in cycleways are not clear.

E-scooters do not meet the NZ Transport Agency’s definition of a motor vehicle, meaning they can be ridden on footpaths, shared paths, roads and separated cycle paths.

Cycle lanes painted on the road can only be used  to allow other vehicles to pass safely, and e-scooter riders are expected to transfer back to the road as soon as it is safe.

Cycle advocate Jon Dean, chairman of Spokes Dunedin, says there is plenty of room in the city for more alternative forms of transport and he does not foresee cyclists and scooter riders butting heads.

"Obviously, we want to promote the use of bikes as a easy, cheap and accessible form of transport, but I think the more sustainable choices people have the better."

It is inevitable scooters will be used in the cycle lanes, even if it is not technically legal.

"It almost seems like the natural place for them and we’re more than happy to share the lanes with scooters."

It is unlikely the popularity of the scooters will dive anytime soon; last week the first online store to sell private e-scooters in New Zealand crashed because of the demand, and 1500 people queued to buy them when a store opened in Auckland.

Dunedin Electric Bikes owner Nathan Parker has sold about five e-scooters since the start of the year. He isn’t sure if the arrival of Lime will prompt some riders to buy their own, but they will at least start a conversation about electric transport.If scooters are allowed in all cycle lanes, then sales will grow.

"It’s a weird thing — I actually get annoyed at cyclists when I’m in the cycle lane on the scooter because I go just that little bit faster, they’re perfect [for] the cycle lanes," he said.

He thought convenience was the biggest factor in the increase in use of e-scooters.

There is a difference from renting one to owning one, renters don't care if they break them, as seen in Surfers Paradise Australia, the renters jump gutters, speed in and out of people and are a pain in the ......... If the DCC allows these prior to Christchurch and Auckland releasing an official report it just shows that the Council true colours Councillors and Cull obviously don't care about the people they work for but no surprises really.

My family were in Auckland for an event one week after these machines hit the streets. Menacing, silent and everywhere....so now you will have to watch out for traffic on footpaths, near corners and behind you before you think about entering a shop or just changing your direction. Good luck Dunedin....you'll love this addition to your list of loves and hates...