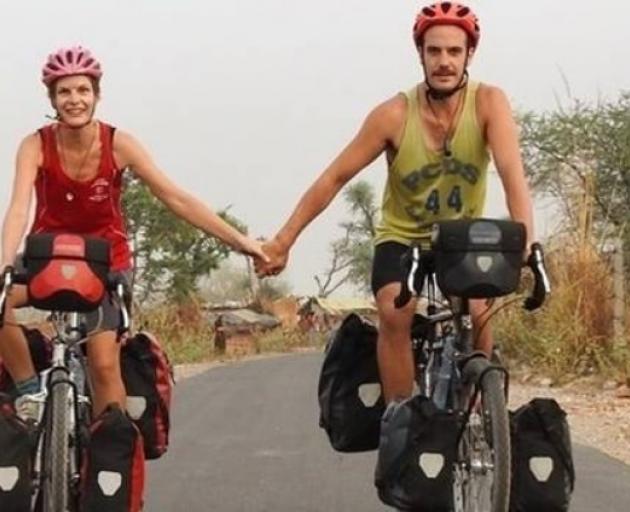 Tane Welton, 33, and Anneke Liefting, 29, have cycled some 24,000km through the UK, Europe, Iran, Oman, India, Nepal, Thailand, Vietnam, Cambodia, Singapore and Indonesia, while living off a budget of $80 a day.

"In almost two years of travelling half the world by bicycle we have experienced so much kindness from strangers than we ever expected," said Liefting, a project manager from Bombay.

"In Iran, we would have half a dozen cars stop us on the road each day to welcome us to their country and give us whatever they had in their car; fruit, dates, nuts, tea or poem books.

"One family in India saw us resting at the top of a hill, they invited us into their home to stay the night where we learnt to make chapattis and then practised yoga in the morning before we cycled off."

And in Vietnam, local fishermen ran out onto the road to usher them into their homes, where cold beers were served alongside freshly picked avocados.

"When we left, they loaded our bikes up with 2kg of avocados, refusing to take our money as if it was an insult that we were offering it."

Unfortunately, they haven't received the same reception cycling through the South Island.

"It's not everybody – it's just that we have had the largest proportion of drivers making us feel scared and unsafe on the roads in the South Island than in any of the other 27 countries we have cycled through," Liefting said.

"On the road from Tekapō to Geraldine, there were a number of vehicles that went past us at 100km/h on a narrow, windy road without giving us a wide berth or slowing down to pass us safely.

"Climbing over Arthur's Pass, there were a number of logging trucks that did the same which made us feel so scared cycling on our roads. "

While cycling over the Crown Range from Queenstown to Wanaka, one motorist yelled at the couple to "get off the f**king road".

"We stop and greet any other cyclists we meet on the road and have been appalled with how they have been treated.

"Two separate travelling couples, one from Belgium and one from Switzerland informed us they had been sworn at a number of times for cycling on the road."

The Belgian tourists – a man and his 20-year-old nephew - were spat at out of the passenger side window in the Twizel region.

"The couple from Switzerland were coming over the Crown Range on January 2 and the passenger in a passing by car leant out his window and spat on the cyclists' face," she said.

"It's so upsetting and infuriating for us to think that tourists are coming all the way from around the world to explore our beautiful natural wonders and for their efforts are being treated so disgustingly.

"How do you apologise to someone for such despicable acts by fellow New Zealanders?

"These are the stories the guest in our country will be going home with to tell to the rest of the world about how some New Zealanders behave."

The couple, who are due to complete their journey in Cape Reinga next month, put their experience in New Zealand down to a combination of factors.

They included narrow roads with no shoulders, few alternate roads, speeding vehicles, a lack of education and simple impatience.

"We got the feeling that many drivers saw us cyclists as an annoyance and not just another road user like everyone else on the road," she said.

"That, because we were riding a bicycle, we somehow have less right to use the road than other traffic.

"And so, overtaking at speed and with less than 1.5m is justified as cyclists are less entitled to use the road."

Addressing the problem wasn't an easy fix, she said, but there were a number of things that could be done to better protect cyclists on our roads.

Cycling Action Network (CAN) spokesperson Patrick Morgan said he was sad, but not surprised, to hear the couple's story.

"Although most drivers do the right thing, there are far too many people disregarding overtaking rules. It's scary, dangerous, and has to stop."

CAN was campaigning for a safe passing rule that would require vehicles to keep their distance.

Morgan couldn't say whether New Zealand was a worse place to cycle than other countries – but he pointed to statistics showing increasing road deaths and injuries since 2013.

"CAN calls on the Government and Councils to reduce risk, by introducing safe speeds, effective enforcement including more speed cameras, and investing in better public transport, walking and cycling," he said.

"We deserve safe streets."
And we deserve to have cyclists who are courteous and don't ride in big bunches expecting other road users to hold back while they finish their discussion about lattes and get back to riding two abreast.

If they ride with the same consideration as shown in the photo, I'm not surprised they've encountered some unhappy motorists.

Cyclists tell this story in every country where there's a credulous media.

Have you never posed for a photo Coker? I don't expect they do much hand holding while they ride either

Many kiwis would love to drive in two cars at the same time if only they could. It will take a while before civilization kicks in here.