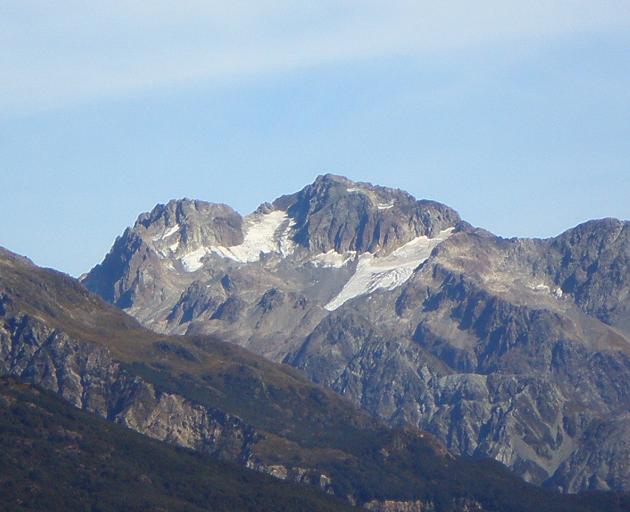 The Whitehorn ice field pictured in March shows the changes to the Southern Alps. Photo: Supplied
The hot summer of 2018-19 has caused glaciers to disappear in the Southern Alps and ice fields to collapse like never before.

Experienced mountaineers say they are shocked at the extent of the melt.

Graeme Kates, who has lived at Arthur's Pass for 25 years, said reports were coming in from climbers and mountaineers showing widespread melting.

''We have seen some big melt-back in this national park in the last few years.

''This summer seems to be particularly bad due to the warm and wet [weather],'' Mr Kates said.

He released pictures of the Whitehorn ice field, which is part of the Three Passes route - a classic four-day tramp from Arthur's Pass National Park to Lake Kaniere.

The ice field is normally marked by a continuous ice sheet from near Harman Pass to Whitehorn Pass. 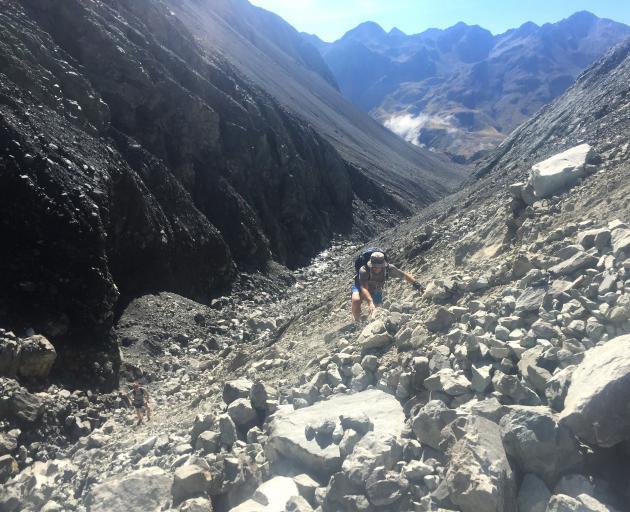 Trampers ascend the extremely unstable rock piles left by the disappearing Whitehorn ice field last summer. Photo: Matt Smith
''But this summer has seen substantial sections of it disappear completely, or its back break as the ice caves beneath it collapse.''

Other ice features to diminish with accelerated melt this year include the Rolleston Glacier (Mt Philistine), Goldney Glacier (Mt Rolleston), and ice fields on both the Otira face of Mt Rolleston and also Mt Harper.

He said other major glaciers in the park were showing signs of considerable moraine wall collapse on to their surfaces from the ice receding and destabilising the surrounding landscape.

''Trampers and climbers should be extremely careful and vigilant when traversing ice fields and glaciers for collapsing ice-bridges and the substantial amount of unstable rock now exposed as they all recede.''

West Coast Alpine Club vice-president Jason Blair said summer 2017-18 had been ''quite alarming'', but this past summer was a ''whole new level''.

Rainfall had whittled down the glaciers.

A side effect of the melt was that as the ice retreated, it was leaving behind treacherous terrain for trampers and climbers, he said.

''One example that many West Coast residents will be familiar with is the rapid down-wasting of the glacier and snowfields on the eastern slopes of Mt Harper at the head of the Waimakariri River, as seen from the Bealey Bridge.

''The small glacier below the summit - only 0.27 of a square kilometre in area in 1986 - and two reasonably sized snowfields on the upper slopes have been viewed and photographed by generations from the first day since the road across Arthur's Pass was constructed.

''These now are little more than snow patches. The snowfield in a high valley off the mountain has disappeared completely.''

Photographs from the 1900s show a continuous snow and ice field below the peak during summer, but today little of that remained, Mr Ewen said.

''The melt-back has been dramatic,'' he said.

''It is a similar story with the small Goldney Glacier below the low peak of Mt Rolleston, as seen opposite the Temple Basin skifield car park. A few more hot summers and it may be gone completely.''

Why are people surprised? As the earth has warmed since the last Ice Age ended approx 11700 years ago glaciers etc have been shrinking overall . Anyone who has done a science class or watched ice melt knows a volume of ice will start melting reasonably slowly but as the volume decreases it accelerates its' melt rate as the amount of cold left to fight the warmer area decreases. As glaciers shrink it is no surprise the they shrink faster and faster .

The cyclic nature of the earth shows it tends to spend more time cold than warm .We are nearing the end of the current inter-glacial warming period. The last four interglacials lasted approx 20,000 years with the warmest portion being a relatively stable period of 10,000 to 15,000 years duration. We passed the interglacial optimum, or climatic optimum of an interglacial, which is when an interglacial experienced the most 'favourable' climate, often the middle part, approx 2000 years ago. It was not long ago (just 30-40 years ago) it was feared we were entering a new mini Ice-Age. As such shouldn't we be delaying the end of this one as long as possible? Worryingly several major glaciers have reversed and been growing recently.